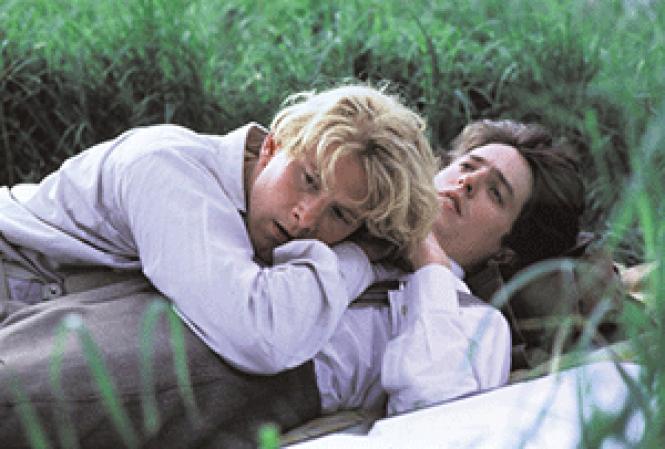 In celebration of its 30th anniversary, the classic gay romance "Maurice" returns to Bay Area theaters. The film opens on July 28 at Landmark's Opera Plaza in San Francisco and at the Shattuck in Berkeley.

It's difficult when viewing "Maurice" today to realize how groundbreaking, even shocking, the film was in 1987. A tale of gay love lost and found in Edwardian England, the film was made 10 years before Ellen DeGeneres' historic coming out. "Maurice" is based on the novel of the same name written by E.M. Forster around 1913, the era in which the story is set. Forster would not allow the book to be published during his lifetime, so it was not in print until 1971, the year after he died at age 91.

James Wilby stars as the title character. While attending Cambridge University in 1909, he enters into a romantic albeit platonic relationship with classmate Clive (Hugh Grant). Maurice wants their relationship to be sexual, but Clive refuses. A few years later, when one of their classmates is sentenced to six months in prison for trying to pick up a man in a bar, a terrified Clive ends their relationship.

The two men don't speak for a year, until Maurice is invited to be an usher at Clive's wedding. Against his better judgment, Maurice accepts. He finds himself battling his gay urges while at Clive's palatial country home. One day he notices that Scudder, a young gamekeeper (Rupert Graves), is paying a great deal of attention to him. At first Maurice treats this servant with contempt, but late one night, Scudder brazenly climbs into Maurice's window.

"I know, sir," Scudder whispers. "I know." The two men proceed to make love. It's an unforgettable sequence.

"Maurice" was directed by Bay Area native James Ivory, who received his greatest fame with a trio of big-screen Forster adaptations. "A Room with a View" (1985) and "Howards End" (1993) were highly successful films, nominated for eight and nine Academy Awards respectively. "Maurice" could be considered Ivory's coming out film – his producing partner, Ismail Merchant, was also his life partner for 44 years. Throughout their career the men worked with screenwriter Ruth Prawer Jhabvala, a trio that the Guinness Book of World Records cited as the longest partnership in independent film history. As with Ivory's other Forster films, "Maurice" was shot on location in England. The film's elegant settings, period costumes and stage-trained cast effectively capture the England of a century ago.

But most importantly, "Maurice" captures the beauty of gay love. Maurice and Scudder might not seem like a well-matched couple. Scudder is a foul-mouthed servant, while Maurice is a "gentleman." Their attraction to each other transcends class. They're soulmates, unable to resist their deep need to be with each other, unable to do anything other than make personal sacrifices so they can be together.

"Maurice" also reminds us that it wasn't always as easy to be gay as it is in today's Bay Area. In Maurice's world, being gay is a crime punishable by jail time. The parts of the film dealing with these issues are a sobering reminder of the horrible things currently being done to gay men in places like Chechnya, Iran and Saudi Arabia.

"Maurice" is certainly one of the best films in queer cinema. If you haven't seen it, do. If you have, consider taking this opportunity to see the film on the big screen, as it was meant to be seen.