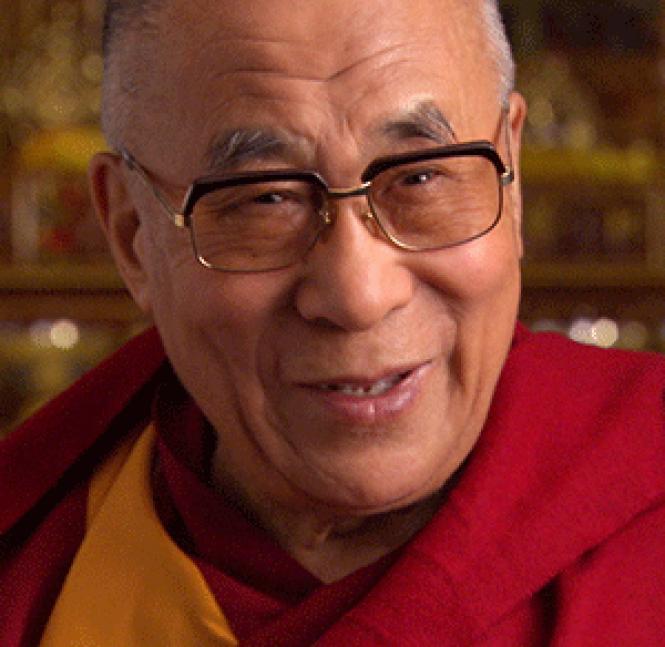 This week we examine two films, one a kind of whimsical biography of a sweet-natured but determined religious leader in exile from his land and people, and the other a deadly earnest melodrama about an ordinary man who sacrificed his life to eliminate a murderous tyrant.

"The Last Dalai Lama?" Documentarian Mickey Lemle has made a career out of filming folks who can't take the freedom to worship for granted. In 1991 Lemle made "Compassion in Exile: The Story of the 14th Dalai Lama." At that time this venerable religious leader had spent his adult years in painful separation from his native Tibet. While control over Tibet had been assigned to China by the British, early in the 20th century the Tibetan people asserted their independence. On Christmas Day, 1959, the 14th Dalai Lama fled his homeland and took up exile in India. In "The Last Dalai Lama?" this now-80-year-old man spoke with humor and philosophical resignation to Lemle about his hopes for a future free Tibet.

Many political commentators have ascribed China's brutal occupation of Tibet to a fierce hunger for land and precious water rights. Lemle examines whether the question mark in his film's title represents a temporary setback for a proud people, or if China will get its way and appoint its own Dalai Lama, a paradoxical move for a state that has long persecuted believers from all faiths.

The film (in English, but with subtitles when the Dalai Lama speaks with his heavy accent) has its share of surprises, including the guest appearance of former Pres. George W. Bush, who proudly displays his painting of the Dalai Lama. The film contains the scene when then-Pres. Bush joined Democratic House leader Nancy Pelosi in giving the Dalai Lama the nation's highest civilian medal.

Although mostly pitched in a lighthearted tone, "TLDL?" does document the tragic suicides by self-immolation of many young Tibetan monks protesting the Chinese occupation of their land and suppression of religious liberty. Opens at SF's Roxie Theater, the Rialto Cinemas in Berkeley and Sebastopol, and the Smith Rafael Film Center in San Rafael.

In "13 Minutes," director Oliver Hirschbiegel presents an arresting historical drama nominated for seven German film awards, in German with English subtitles. In November 1939, two months after Hitler's brutal air attack on and invasion of Poland, a private German citizen, Georg Elser, tried to kill Hitler by planting a bomb in the podium from which the German leader was scheduled to address a large Nazi Party rally. The attempt fails, and Elser is arrested and subjected to a torturous interrogation as Nazi agents try to discover if he had any accomplices. During his long imprisonment, Elser recalls the events leading up to his plot, and his reasons for deciding to take such drastic action.

The film joins a small but distinguished batch of German-produced dramas depicting attempts by native Germans to end Nazi-sponsored atrocities by killing their leader. The most notable was Michael Verhoeven's "The White Rose," a 1983 depiction of the small band of German college students who attempted to overthrow the Nazis in 1942. This new drama is remarkable for its flashbacks where Elser recalls how Nazism took over his hometown like a cancer. After his initial attempts to oppose the Nazis with a few close friends, he sets out on a truly dangerous plan, insisting on acting strictly on his own. Early scenes show him carefully constructing the small explosive device. Later we witness the beatings he endures without cracking as his interrogators try to get him to implicate others in his plot.

"13 Minutes" is a fine example of physical and moral courage from an unlikely source, a man who had wanted only to live his private life, drink with his friends, fall in love, and live out his appointed time without calling attention to himself. After his interrogation Elser spends the rest of his days in two concentration camps. Right before the end Hitler personally orders his execution on April 9, 1945, only days before the war in Europe ends and Hitler's own suicide in the bunker. A powerful story is made even more effective by restrained performances and the effective use of flashbacks and present-tense storytelling. Opens Friday at Landmark's Opera Plaza in SF, Shattuck in Berkeley, CineArts in Palo Alto, and the Osio Plaza Theatre in Monterey.