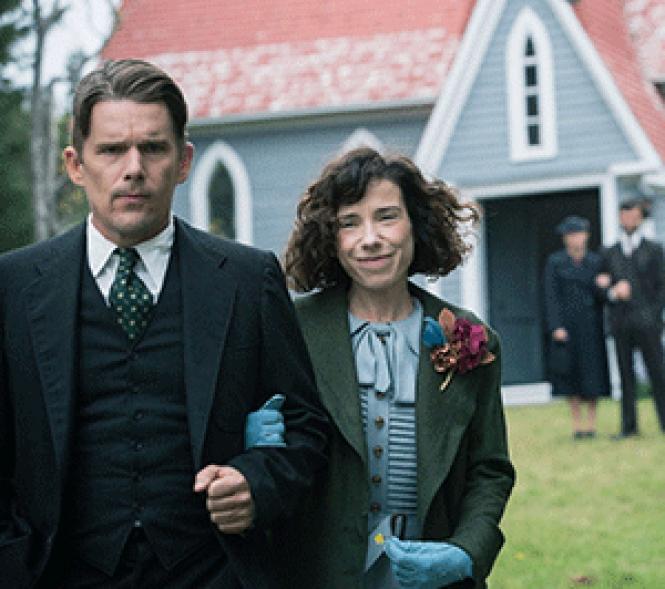 My pleasure at viewing "Maudie," a beautifully crafted bio-pic of the 20th-century Canadian folk artist Maud Lewis (1903-70), was tempered by a tinge of guilt over a long-running private joke of mine. It's that anyone who irritates me for reasons profound or petty should be consigned to living in permanent exile in Nova Scotia. Why did this isolated Canadian maritime province exert this fiendish hold on my imagination? Hard to say, but after viewing British director Aisling Walsh's personal tale(scripted by Sherry White), I will forever see these hardscrapple folks in a different spirit.

The real-life artist Maud Dowley Lewis was born on March 7, 1903, in South Ohio, Nova Scotia, to a blacksmith and maker of horse harnesses father, Jack, and a folk artist mom, Agnes. Crippled by childhood arthritis, Maud developed a gift for painting comparable to the renowned American folk artist Grandma Moses. Maud suffered the devastating loss of both parents at 14, after which she was consigned to the home of a stern aunt.

It's at this point that the film picks up her story. We watch as Maudie (Sally Hawkins) is sent away to become a kind of maid/housekeeper to a 40ish recluse, Everett Lewis (an unrecognizable Ethan Hawke), a man who had been booted out by his parents as a child, and who, when Maudie arrives, is living in a tiny shack, sans electricity or running water. The story of how this incompetent housekeeper and this angry bachelor manage to coexist and not kill each other would be remarkable enough, but that Maudie actually wins him over to indulging her artistic pursuits, paying her for poor broom skills, and allowing her to sell her early work is nothing less than astonishing. Warning: there's one brutal slap by Everett against Maudie as they're sorting out their odd-couple relationship.

The paintings and small postcards Lewis created have been painstakingly reproduced, but the biggest hand has to be reserved for the leads, who are both completely made over from the images we have of them from long, successful careers. Sally Hawkins renders Maudie as simultaneously endearing and annoying, much as she probably first appeared to her unlikely housemate/future husband. Hawkins is well-known for her work with directors as diverse as Woody Allen ("Blue Jasmine") and Mike Leigh ("Happy Go Lucky"), but as Maudie she creates a truly free spirit, very likely an Oscar nod.

Ethan Hawke first burst on the film scene as one of the literary angels from Peter Weir's "Dead Poet's Society," was a remarkable member of the ensemble gathered by Richard Linklater for his 12-years-in-the-making narrative bio "Boyhood," and did a remarkable turn as one of the brothers who plot to rob their family's jewelry store in Sydney Lumet's chilling swan song "Before the Devil Knows You're Dead." Aided by the filmmakers' agile use of available light, Hawke absolutely disappears into this role, like none other on his resume.

"Maudie" continues at Landmark's Embarcadero in San Francisco, Shattuck in Berkeley, Aquarius Twin in Palo Alto, and at Smith Rafael Film Center in San Rafael. It's MPAA-rated PG-13 for some thematic material and brief sexuality.