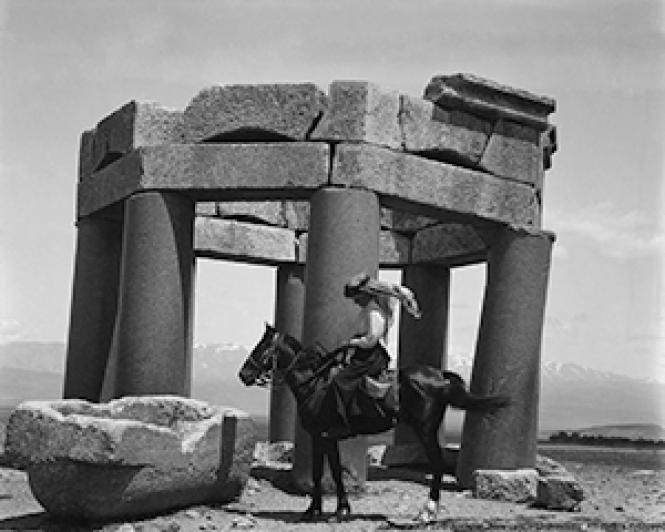 Gertrude Bell in 1900, in a scene from the documentary "Letters from Baghdad."

Gertrude Bell (1868-1926) is an ambiguous historical figure along the lines of T.E. Lawrence "of Arabia" (1888-1935), a rather queer British person who used Empire as an excuse to have adventures, fell hard for native culture, and exercised some esoteric geopolitical influence. Inevitably, such well-intentioned Arabophiles had their loyalties shredded when Western capitalists reneged on the promise of self-rule for the newly created Iraq. The UK's headache became a USA quagmire in 2003, and now Islamist terrorists have brought the battle to European capitals. The documentary "Letters from Baghdad" sketches the earlier failure, Friday at Opera Plaza.

"Letters" uses archival footage to assemble a mosaic of places and people, British, Arab, and Persian, as they were before, during, and after WWI. Clips and pix are fascinating but rarely identified, so the Middle Eastern bits are a jumble of cultures you'd need to be an expert to distinguish. There are maps, or pieces of maps, that deprive the viewer of the big picture, fading in and out before you know where you are. Once away from the stifling confines of upper-class England, Gertrude Bell's travels left the ordinary tourist in the dust. An entire film could and perhaps should be made of her truly amazing adventures.

Wedged in among the archival snippets are talking heads in costume, who intone sentences from their own letters or diaries. Too many minor characters pop in and out to keep track of, and they're all Downtonesque wannabes. The film's conceit is to dispense with narration by splicing together these contemporary sources, but Â words from Bell's prolific pen get lost in the dust storm. Tilda Swinton off-camera breathlessly reads redundant letters home to the father she will never see again, for whom she professes undying devotion from a well-maintained distance. This existential ambivalence, or duplicity, or bad faith, is never explored.

"Letters" lingers long over Bell's platonic attachments to a few men, early on. These were never consummated and it starts to seem obvious that men were awed by her indomitable spirit, her brain, dare I say her virility. The heterosexual imperative has never seemed so puny as in this saga of a woman who thought nothing of entering unmapped tribal territory, organizing her own 20-camel caravan, and setting off on a geological survey of wells, photographing ruins, with some ethnographic study on the side. Any man's equal, this Victorian explorer will find herself in a geopolitical no-man's-land after WWI.

Forty minutes in, this brittle sketch hits pay dirt as Gertrude Bell designs the borders of the newly minted Iraq. All of her hard-won expertise on tribal cultures will pay off when the Brits fulfill their promise of a free Arab state, after Arabs help them outwit the Germans. Too bad something called the Sykes-Picot Agreement scuppers this idyll. Standard Oil is mentioned in passing. Her hopes betrayed by her own country, Gertrude Bell discovers she's on the wrong side. Once the West's puppet is installed, she's relieved of her political post and assigned to organize Iraq's fabled antiquities. Once the museum opens, she dies of an overdose. We only learn this by reading, after the final image of a sunset.

Any movie about Gertrude Bell is better than no movie about Gertrude Bell, unless perhaps it's a movie starring Nicole Kidman. I didn't see Werner Herzog's descent into conventionality "Queen of the Desert" (2015), and I doubt I could stomach it. Since movies are how most of us learn our history, "Letters" is a welcome riposte to Kidman's noseless portrayal. Tilda Swinton on-camera would be an improvement; maybe that's why she also executive-produced, to give others that casting hint. Directors Zeva Oelbaum and Sabine Kayenbuehl have meticulously crafted an overly cautious but much-needed corrective to USA's disastrous, ongoing campaign of oil-based misinformation.

"Letters" tells the tragic tale of a greatly gifted woman who escaped the choking confines of late Victoriana to live the life of a Bedouin, played each side against the middle, and ended up alone. She'd always been singular, because she'd worshipped freedom. Now she had to face her sense of "immense failure here. We'd promised an Arab government with British advisors and had set up a British government with Arab advisors." She had not, after all, managed to escape the prison of Empire. Out of range of her own father, she'd fallen into the clutches of more powerful men. She'd thought she was playing them, but they were playing her. Plus ca change.