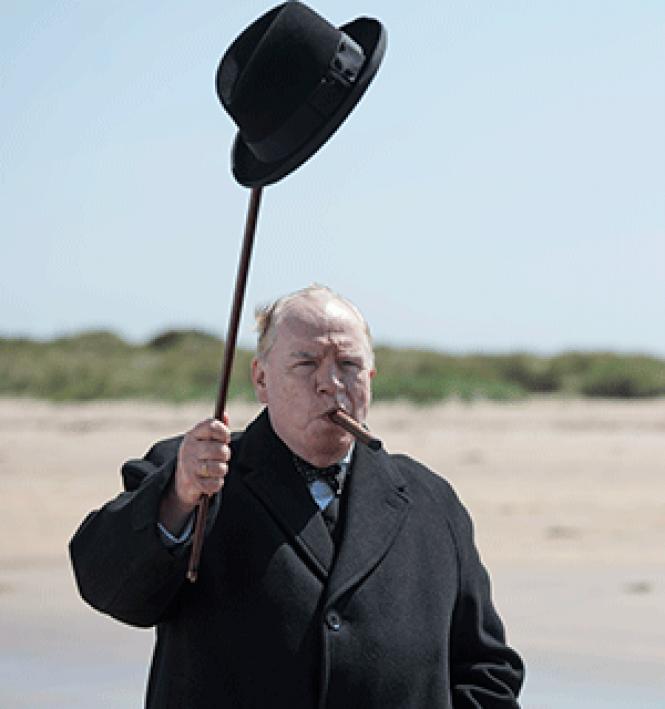 Winston Churchill (1874-1965) is a mythic figure of the British battle 75 years ago to keep the Nazis from enslaving Britain. He's been dead for 50 years, and this year two films about him are being released. Why? He represents a national ideal of sovereignty that has cruelly eroded since the end of World War II, when USA emerged as a geopolitical giant. Does the Britain that Prime Minister Churchill roused into sacrifice and self-defense still exist? Maybe not, but movies can make you believe it does. "Churchill," an intimate portrait of the great leader in the lead-up to D-Day, opens Friday at the Clay in San Francisco and the Shattuck in Berkeley.

Miranda Richardson's recent film apparitions are rare and frustrating compared with earlier career highpoints "Dance with a Stranger" or "The Crying Game." Here, however, she proves she's as good at acting dignified as she was at perpetrating indignities. Mrs. Churchill is a domestic beacon of common sense chafing at her querulous husband's delusional desire to physically lead British soldiers at the ripe old age of 69. Brian Cox, while never quite incarnating Winston, reveals the vulnerability beneath the bombast. John Slattery, with all the depth of a male model, is jarringly miscast as Eisenhower, but everyone else muddles through.

"Churchill" shows a man whose powers of action are ebbing, whose hold on reality is enfeebled, but whose ability to speak, write, connect, and inspire a nation into self-belief is at its apex. He spends most of the movie arguing with General Dwight Eisenhower about the daring and dangerous plan to land troops on the beach at Normandy. Old Winston worries aloud redundantly about the young soldiers being sent to their deaths; he proposes drawing up other plans; he prays for rain; he drives the Missus mad. All because he's haunted by Gallipoli, his failed naval invasion of the Dardanelles in 1915, during WWI.

We're always fighting yesterday's wars. That might have been the movie's take-away theme, except D-Day was a huge success, despite the loss of life, and Churchill emerged from WWII as the personification of Britain's ability to endure, even as its Empire was crumbling. "Churchill" is a feel-good film about a war fought to defend the Western European democracies against the scourge of fascism. No, it's a film about an idea of Englishness worth fighting for. No, it's a tribute to an individual personality who spent his life fighting and writing, politicking and smoking Havana cigars, a gutsy bulldog, an icon.

Icons swiftly slip into self-parody, and the Churchill of "Churchill" is a bit of a voyeur on his own storied existence, commenting to the audience on the action as it unfolds, muttering or bellowing in old patriarch rage at his obsolescence. The cigar never feels real; the homburg hat, the bow tie aren't lived in; the lines spoken have a studied, heightened, theatrical feel that tips over into camp. But then, so did the man himself, an indefatigable performer of his own existence and prolific chronicler of his own storied career.

The movie is long at 104 minutes, but if you're in the mood for a leisurely biopic, "Churchill" will waft you back to a pristine past in which war is war, a car is a Bentley or a Rolls, the UK has a king who stutters, and radio broadcasts unite the nation. Alex von Tunzelmann, an English writer of nonfiction whose Guardian column "Reel History" skewers movies for their historical inaccuracy, wrote the script. I assume it's accurate. It's also poetic in its evocation of bloody waves on a sandy beach, and psychological in its disciplined rendering of Churchill's moments of madness.

I didn't expect to cry, but I did, several times, often right before laughing. Or vice versa. I was being manipulated by director Jonathan Teplitzky, and loving it. I was under the spell of civilized people who know how to act, playing characters who know how to behave. "Churchill" creates, as did the man himself in his lifetime, the illusion of stability, even at the height of crisis. This alone is worth the price of admission. As is the sense that people then were willing to die for a cause greater than themselves.