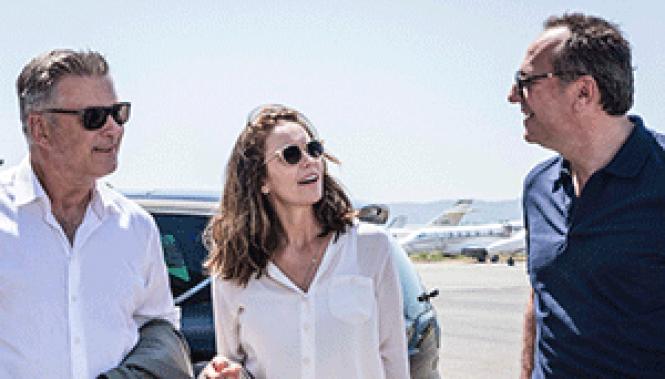 Paris Can Wait, from first-time director Eleanor Coppola, is in some ways the perfect early-summer fare: slick, semi-entertaining, and easily forgotten. The premise is workable if shopworn. A 50-something American housewife (thoroughly charming Diane Lane) finds herself trapped in Cannes with what Psychology Today magazine used to call a "Type-A" personality: a work-aholic film-producer husband immune to shaming (little more than a cameo from the overbooked Alec Baldwin) who's not only married to "the deal," but more than likely is cheating with a stable of attractive babes half his age deftly stashed in every film capital around the globe.

In the first act Anne's excuse for not flying off to Budapest with this jerk is a pesky inner-ear infection. Plan B is for her to catch a ride to Paris with hubby's French business partner (French actor-writer Arnaud Viard). At first it seems an odd choice, with Viard radiating little Gallic charm and frankly coming off as a kind of professional mooch out to scam free meals on somebody else's Diner Club card. I'd love to report that our 90 minutes on the road with Anne and Jacques fly by, but sadly, no. It's not excruciatingly awful, just dull, sort of like being trapped on Caltrain behind a couple whose banal conversation is pitched too loud to ignore but remains forgettable.

The secret to a great road movie, one of the staples of both Hollywood and Indie-wood, is to trap two or more people in the company of folks they detest on sight. Claudette Colbert's rich girl on the lam in Frank Capra's groundbreaking It Happened One Night was pitted against Clark Gable's cynical newshound who, for the first half of the picture, feigns little interest in the pampered brat except for the bounty offered by her wealthy papa. In Paris Can Wait, neither Anne nor Jacques radiates any obvious chemistry. At first, each inhabits their own movie, and even Anne's impatience with her companion's frequent snack breaks fails to rise above mild peevishness. Of course, they don't know each other well enough to put on the gloves, and family politics encourage at least surface politeness. The result is like a series of trailers for a drama that never ignites. Even that surefire gimmick, the sudden highway breakdown, produces little besides a few stale under-the-hood jokes.

The other way to rescue this torpid trip would be for the couple to run into some interesting hitchhikers, Coppola cousin Jason Schwartzman perhaps. Alas! The only saving grace is the food, so well-photographed that I longed for that John Waters fantasy: the movie technology that would allow cast and audience to reach out and share the experience.

In the best road comedy of our time, Little Miss Sunshine, the filmmakers fill their barely roadworthy yellow VW bus with a family whose members are barely on speaking terms, pressed as they are into attending a risible event, a beauty contest for 8-year-old girls. A highlight is the moment when an up-til-then mute teen (scene-stealing Paul Dano) finally cracks and reads his travel mates to filth: "Divorce, bankruptcy, suicide! I hate you people!"

The slickly produced Paris Can Wait lacks any spark of real feeling between characters who take up our time without the courtesy of letting us get to know them, for better or worse. Eleanor Coppola â€" a talented nonfiction writer whose 1989 volume Notes about hubby Francis Coppola's disastrous experience filming his Vietnam War epic Apocalypse Now was a best-of-its-kind classic â€" here misses mining her fictional characters for precisely the believable quirks, warts and foibles that can make them believable.

This film should be experienced, if at all, as a cable-TV time-filler. Instead, rent Francis Coppola's terrific movies with a young Diane Lane The Outsiders, Rumblefish or The Cotton Club, or better yet, re-experience those funny, grouchy characters in Little Miss Sunshine .