The fetus did it! 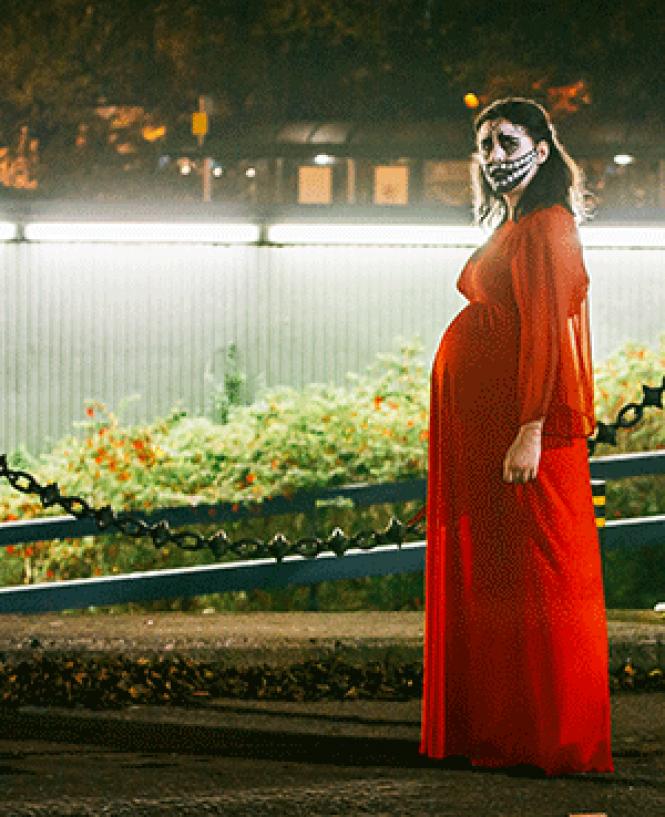 Henry James wrote what is perhaps the greatest "unreliable narrator" tale in the English language. The Turn of the Screw appeared in serialized bursts beginning in January 1898, making this its 119th anniversary. In book form, it runs to 100 pages and can be read swiftly in one sitting. The overcast of ambiguity spurs the unwary reader on, as if more unreliable words could resolve the central muddle. A reader who gives her trust to a delusional protagonist will be brought up short at the end. So it is with Prevenge, a wildly funny film opening Friday at the Roxie Theater.

This entire review is a spoiler and should really be read after you've seen the film, unless you need some convincing to spend your time and money to go see it. Good films are rare and to be savored for their surprises. Prevenge managed to consistently contradict my expectations by its steady stream of plot twists, shifts in mood, well-observed subversions, and abrupt crescendos that finished off carefully built sequences. To find oneself in the hands of a master, or in this case mistress, is a pleasure multiplied when one finds oneself in a spasms of laughter mixed with awe.

Alice Lowe has been performing and writing very clever comedy over in England for some time, but I knew nothing about it. Her first feature as a director is brilliant in a Jennifer Saunders way, mordant, skillful, outrageous, and true. That a woman could write a script about being pregnant and turn the concept on its head in a manner reminiscent of Rosemary's Baby, getting all the downtrodden, woman-alone, anti-male-privilege stuff right, is understandable. That she could also star and direct while actually pregnant is insane.

If you have a stake in men's self-importance, or the empty pursuits of corporate culture, if you've never been on the receiving end of a male or female dickhead's insults, you might not get the jokes. But if you have any sense of humor and some curiosity about what it must be like to carry the child of a man who was killed through avoidable human carelessness, this film will intrigue you. How can a woman grieve yet gestate? How can she want to die and still give birth? Tasked with bringing a new life into the world, where does she direct her rage?

I'm being ponderous, unlike Prevenge, which is deft, insouciant, witty and efficient in its effects, set-ups, and storytelling. Ruth is a single pregnant woman whose man died on a seaside cliff in Pembrokeshire, in South West Wales. Contrary to every handbook for new mothers, the fetus emits clear high-pitched commands to its matrix to wreak revenge for the death of its progenitor. Ruth becomes a serial killer doing the bidding of her unborn fatherless child. The murders are richly deserved and awfully funny.

The miracle of Prevenge is Ruth's ambiguity, her resistance to the homicidal demands made on her by her fetus, her regret when she's forced to off an innocent bystander. The tawdriness of the ploys she stoops to makes her cry. Ambiguity is also the crowning aspect of The Turn of the Screw, which similarly features evil children. Unlike James, Lowe appends an epilogue of sorts, when she awakes from her psychosis post-partum and sees her baby is a normal baby and herself a normal mum. This bit of anti-climax is the only thing approaching a flaw in an otherwise tour de force triple-threat slice of comic genius.