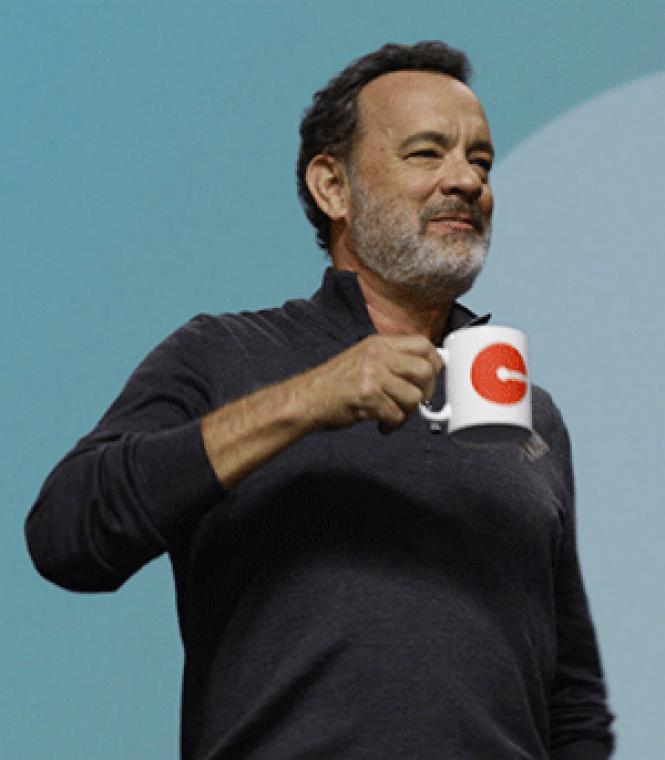 Webster's defines dystopia as "an imaginary place where people lead de-humanized and often fearful lives." In the new dystopian thriller/dark comedy The Circle (now playing in Bay AreaÂ theaters) a collection of attractiveÂ 20/30-something women and men embrace a world where digital technology has advanced to the point that somebody or something is always watching. The English writer George Orwell called his idea of a such a world 1984 .

In 2013, Bay Area writer Dave Eggers updated Orwell with a chilling satire he entitled The Circle. The heroine of this 497-page novel, Mae (Emma Watson), is a young, restless office-worker who abhors the bland ennui of her work life in a corporate office cubicle. She's soon uprooted from this treadmill to oblivion by the siren song of a radically different sort of workplace, whose spiritual leader Eamon Bailey (Tom Hanks) is a fountain of New Age platitudes. "Knowing is good, but knowing everything is better." Bailey's enterprise seems to combine the vision and possibly the overreaching dynamics of such high-performing, hyper-profitable Silicon Valley Internet corporations as Google and Facebook. He will later update his mantra to the distinctly less upbeat "We're so fucked."

The techno upgrade that makes The Circle 's Big Brother possible is a tiny camera that is always on, always observing, always recording and storing everything it surveys. Why would anyone think this a good idea? Well, that's where things get sticky. Some will point to a world where technology has abolished many traditional forms of honorable labor, from factory jobs to driving to media occupations. Others will point to a post-1960s conservative desire to reign in the radical "hippie, free love, free speech" generation that ousted two American presidents and threatened the money-making ties between the classroom and the boardroom.

On the one hand, computer-age technology gives us so many lovely techno toys to play with, on the other hand it presents a real threat to any last traces of privacy. It is precisely these big-picture, Darwinism implications that make evaluating The Circle so tricky. Is The Circle a cult? Are Mae and her female friends victims of the ultimate male gaze? The film hedges its bets with Hanks' character presenting an image of strong maleÂ leadership that is both enticing and quite sinister, while the young actor Ellar Coltrane, who stole our hearts in director Richard Linklater's Boyhood, here presents a less attractive role model as Mae's feckless ex-boyfriend.

Director James Ponsoldt excelled at tweaking out the slapstick social-comedy of an old baseball umpire trying to recruit a neighbor kid to pass as his son at a college reunion in Off the Black. In The Circle, the comedy is just as palpable, but the laughs may stick in your throat as you realize the greater threat posed by The Circle's genuine attack on the very idea of privacy. Some from the tech sector may resent the attack on their legitimacy raised by both Eggers' book and the film. Similarly, in 1951 many newspaper reviewers were highly annoyed by director Billy Wilder's Ace in the Hole, with its unscrupulous reporter (a career-high nasty anti-hero from the now-100-year-old Kirk Douglas) making journalists as a class look like a bunch of sensation-seeking ghouls.

One of The Circle's clear casting coups is putting Tom Hanks in the role of the dystopian cult's fearless leader. This is the same Tom Hanks who is relentlessly on-the-mark as the American spy-catcher in Bridge of Spies, and so resolutely heroic as the pilot of the airliner ditching in New York's East River in the bio-pic Sully. Could this latter-day Jimmy Stewart icon steer us wrong?

In 1949, Hollywood vet King Vidor directed a top-drawer cast headed up by Gary Cooper and Patricia Neal in a then-topical big-screen take on far-right philosopher Ayn Rand's anti-collectivist vision in her long novel The Fountainhead. The Circle has brought us full circle, and Bay Area tech-savvy audiences will have to figure out if that's a good or very dangerous thing.