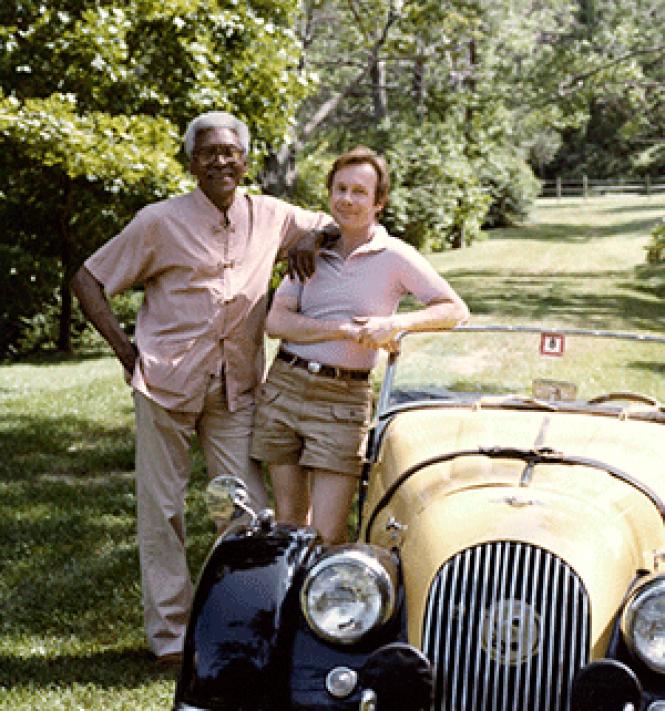 Bayard Rustin and Walter Naegle in a scene from Matt Wolf's short film Bayard and Me.
Photo: Courtesy Estate of Bayard Rustin

In Matt Wolf's short, sweet film Bayard and Me, Walter Naegle, a gay man in New York, recalls his relationship with Bayard Rustin (1912-87). Rustin was the openly gay civil rights leader who worked closely with Dr. Martin Luther King in organizing the March on Washington in 1963. Because of his homosexuality, Rustin has often been left out of history.

Wolf, a younger gay man who grew up in San Jose, is a longtime admirer of Rustin. The filmmaker, who currently lives in New York, points his camera at Naegle and lets the now 68-year-old share his memories. Parts of Bayard and Me were shot in the New York apartment where Rustin and Naegle made a life together. That apartment remains Naegle's home three decades after Rustin's passing.

Bayard and Me is only 16 minutes long. Wolf manages to include an impressive amount of information in the film's scant running time. As Naegle walks through New York's once-seedy Times Square, he recalls his first meeting with Rustin in front of a newspaper stand in 1977. Both men were waiting for a red light. They looked into each other's eyes and instantly connected, remaining together for the rest of Rustin's life.

At the time, Rustin was 65. Naegle was 27. He speaks honestly and matter-of-factly about their age differences. Both men knew that their time together would be limited. Naegle also recalls a mom that many gay men of the period might have wished they had. Though concerned for the many taboos her son was breaking (a gay, interracial, intergenerational relationship) at a time when LGBT equality laws were still a dream and intolerance was still the norm, Mrs. Naegle accepted their relationship and embraced Rustin.

As he sits in the home they once shared, a home still filled with many objets d'art that Rustin collected and loved, Naegle reminds us what life was like in those pre-marriage-equality days. Rustin wanted to be sure that Naegle could remain in their home after his passing. To give Naegle legal status, Rustin adopted Naegle as his son, a common practice among same-sex couples in generations past. Mrs. Naegle signed the necessary paperwork, giving up her own parental connection to her son so the adoption could move forward.

The best films leave you wanting more. When Bayard and Me fades out, most viewers will be thirsty for more. In 2013 Naegle accepted the Medal of Freedom from Pres. Obama in honor of Rustin's civil rights work. It was a long overdue honor, yet this is not mentioned in the film. Hopefully Wolf and Naegle can collaborate on a longer version of this work, so that more insight into the couple's life and Rustin's work can be offered.

Bayard and Me is currently touring the film festival circuit. For more info: superdeluxe.com or mattwolf.info.