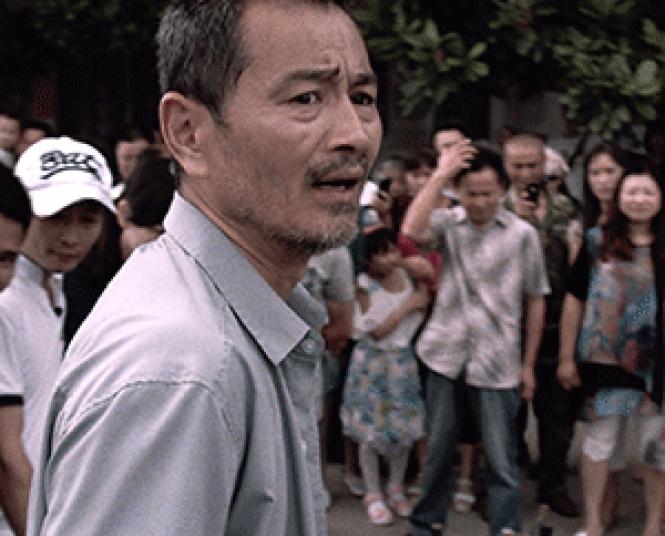 Anyone who's heard good things about the new Chinese film Lao Shi (Old Stone) and doesn't want me to ruin it for them should stop reading now. This wannabe cutting-edge denunciation of a society bent on its own destruction through lack of compassion, which turns a good man into a bad man when all he wanted to do was be good, might be your cup of oolong. Don't let me stop you from queuing up at Opera Plaza in San Fran, or Shattuck Cinema in Berkeley, starting Fri., Dec. 9.

There are many ways to ruin a movie, but the simplest is not to have a good script. At 80 minutes, Old Stone is short for a feature, since it's really a short story plumped up with spliced-in footage of trees waving in the wind or grimy city streets. Its linear plot proceeds step by obvious step, following an anti-hero who is alone in possessing any twinkle of subjectivity, but is surrounded and hounded by troglodytes who never detach long enough from their grubby pursuit of narrow material goals to show signs of a soul. Only the anti-hero has the sense to be disappointed in humanity.

Old Stone is the name of a taxi driver who, as played by Chen Gang, is tall, sinewy, weather-beaten, beautiful albeit grizzled, aloof, naive bordering on indifferent. His life comes complete with a taxi, a wife, a teenage daughter, and a smoking habit. When he allows some pushy woman to shove a drunken man into the front seat of his cab and accepts her cash to override his personal rule never to chauffeur a drunk, Old Stone sets in motion a series of events some might call Kafkaesque but I will call barely believable, or rigged in service of a cynical world view.

The Drunk messes with Old Stone's ability to control his cab, which fells a scooter driver. As in all parables, these generalized types never accede to the level of humanity the film seems hell-bent on skewering modern Chinese society for denying its own people. See the irony there? Filmmaker Johnny Ma takes such a long view that his humans are reduced to ants, his actors to masks that never take on life. He even undercuts his own vision by bringing in violins, literally, to underscore shots of his self-pitying protagonist.

Old Stone, having no will of his own, lets the jabbering crowd convince him to drive Scooter Boy to the hospital rather than wait for an ambulance. He starts paying the hospital bills. Once his wife finds out, she's understandably pissed off, yet is portrayed as just one more yammering nuisance in Old Stone's Tale of Woe. How exactly they separate and where he then goes to live remain mysteries. With his taxi impounded, he's seen throwing bricks and driving a white pick-up truck when he's not hanging out in the hospital watching over his victim, now in a coma.

Spoiler alert. Is the director an admirer of the Michael Douglas school of revenge fantasy? There are too many film influences here to count. After the predictably downward wifeless spiral of not shaving, drinking while driving, and looking morose, Old Stone grows some and decides to kill his victim by pulling the plug on the respirator. At minute 56, the plot thickens. The shock revives the patient in a truly nerve-wracking moment of nurse-doctor scurrying panic. So Old Stone traces him to his village and they end up slugging it out in a marsh on a moonless night to the tune of very loud frogs.

Then they're both killed by an 18-wheeler. But not before Old Stone has a vision of his much younger wife almost smiling at him, and his daughter turning her back to practice a cheesy dance routine. Face covered in fake blood and sweat, Old Stone is conscious enough to see the driver give him the once-over and decide he's not worth driving to the hospital. See the irony? Old Stone does, but it's too late to save him or this film. So the trucker runs him over on purpose this time, to take us out of our misery as bagpipes blare over the end credits.