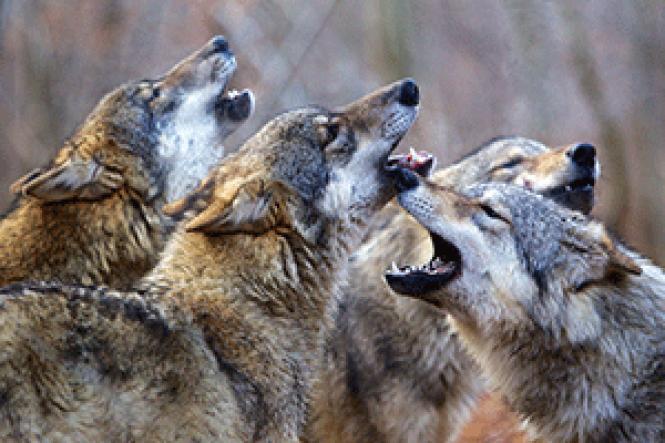 Where do animals live when they're not in zoos? I don't mean domesticated dogs and cats who crowd our SPCA and living rooms, or the clever rats, bossy pigeons, and sneaky cockroaches who accompany us in city dwellings. I mean the Resistance: wild animals who need great swathes of air and land in order to exercise their God-given freedom unimpeded by the exorbitant drain on resources exacted by human infestation. This is the underlying question posed in a new film with the benign title Seasons. Co-produced by France and Germany, this 95-minute documentary captures the glory and mystery of non-human persons going about their daily lives in natural habitat. Opens Friday at Opera Plaza Cinema in San Francisco, and Shattuck Cinema in Berkeley.

Filmmakers Jacques Perrin & Jacques Cluzaud are well-known in the States for their genius epic Winged Migration , and Le Peuple Migratoire , which literally translates as The Migrating People. In this title is contained an attitude toward non-human animals as having civil rights on par with the dominant species. This sentiment pervades Seasons , which is about 85% wordless footage and 15% voiceover, providing prehistorical context in a prologue and then some more modern contextualizing as an epilogue. The film's raison d'etre is, paradoxically, to capture denizens of the forest in the absence of humans.

The chronology onscreen is sketchy. The prologue quickly establishes an Ice Age in retreat with fabulous shots of what I'm guessing are musk ox arising out of the snow to shake off their temporary white winter coats, revealing massive heads, hooves, and nostrils. These people are almost impervious to sub-zero, as are the elk we watch running in herds up to the Arctic for some reason. If you know your cave paintings circa 40,000 B.C., you'll have a vague sense of human-animal interaction in France in roughly this period, but the film doesn't go into human migration into Europe, any more than it identifies species. Data takes a back seat to visuals.

The forest is the star of the movie. After the ice recedes, plants flourish, including those great plants called trees. In their shadows and branches and roots arise the many denizens we know from paintings and novels and myths. And if we're lucky, from our gardens and National Parks. These animals are particular to the forest, and the forest in question is not the equatorial rain forest of Africa and South America. The focus is on Europe. This is interesting because so much conservation focus is on the charismatic megafauna of Africa and the biodiversity of the Amazon, but the less exotic species of the Northern Hemisphere, which includes the States, also need their homes.

For 80 minutes we are submerged in a sort of home movie, shot to the highest professional standard, of animals living their lives. Birds are here in large number, but so are carnivores such as bears and foxes, and ungulates like wild horses and boar. Few amphibians and only one snake, but it's a humdinger. Film was shot in a dozen forests in France and two in Poland over two years. This isn't the work of scientists counting species, and no doubt the several cameramen captured anecdotes as they happened upon them, like the baby foxes retreating to their den at the approach of a juvenile lynx. Not exhaustive, but representative.

The presence of humans is discreetly evoked, in glimpses that do not impinge on the forest creatures, first as relatively benign hunter-gatherers. At film's end, however, we endure a brief but brutal summary of the clearing of the forests, first for ship-building (3,000 giant oaks for a galleon) and then as avenues for the hunt. I am someone who cries at fallen trees, and now I think these tears are a memory of this time, millennia past, when the forest was cleared for agriculture. Our own wild selves, along with the wolves and hedgehogs, have lost our refuge.