Law enforcement armed to the teeth 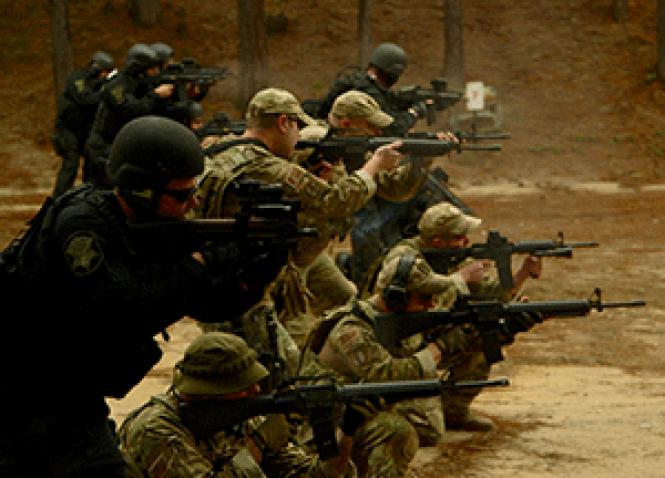 Filmmaker Craig Atkinson is the son of a now-retired police officer. In Do Not Resist (opening Friday at the Roxie in San Francisco and the Rialto Cinemas Elmwood in Berkeley) he creates a chilling portrait of an American urban landscape where many of this nation's estimated 18,000 law-enforcement agencies are being armed to the teeth, equipped with military-style weapons carried on battle-tank-like mobile vehicles. Do Not Resist paints a scary picture of just how many of the nation's men and women in uniform are being deployed to combat the effects of groups like "Black Lives Matter," as if these domestic protests were akin to armed guerrilla forces in the Middle East.

"The policeman is the man of the city. You are to your city, your county, or your state what the frontiersman was to his [community]. You fight violence. What do you fight it with? Superior violence. This is the realm we operate in. We are men and women of violence. Let's master it, or it will master us."

In what may be the most quotable moment in the 72-minute film, a police trainer is heard telling a packed room full of officers and chiefs, "Cops say knock-down and drag-out fights, cuff them and stuff them, and then go home at the end shift, and they all say, 'The best sex I've had in months!' Their partners are very invested in some very intense sex. There are not many perks associated with this job. If you find one, relax and partake of it."

The film kicks off in Ferguson, Missouri, in the aftermath of the police shooting of Michael Brown. The filmmakers explore what you might call the unintended consequences of the war on terror. In the town of Concord, New Hampshire, Atkinson's cameras capture a lively discussion as the city council debates accepting a large chunk of federal money to buy a Bearcat armored vehicle in a town of less than 43,000 people with a miniscule crime rate. Despite some strong arguments against taking the money, council members vote to accept the grant with only a single dissenting vote. Later the filmmakers take us to a small African American enclave in South Carolina, where the police violently attack a black residence in the guise of searching for drugs.

Do Not Resist cites a drug-raiding instructor about why the drug-raiding trainees so enjoy their jobs. "You remember the first search warrant. You write on the outside of one of these armored vehicles, I just try not to smile. It was so much fun. I thought it was so cool. So now I when I watch new trainees â€" we call them pupsÂ â€" I'm always watching them the first time they go out on a search warrant, they're always smiling from ear to ear. They feel like they're just on top of the world."