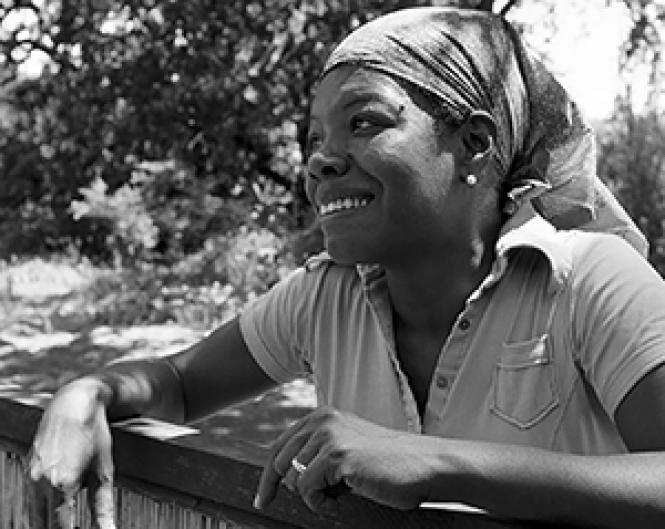 In 1990, Maya Angelou appeared on People Are Talking, a daytime chat show produced at the Bay Area's KTVU-TV. "Maya, what do you think of interracial relationships?' she was asked by a teenage girl.

"First of all, I'm Ms. Angelou," she replied. "I'm 62 years old. You do not have the license to call me Maya." The studio audience applauded. This is but one of the many powerful moments in Maya Angelou: And Still I Rise, a new feature-length documentary opening on Friday.

Angelou (1928-2014) is best-remembered for her acclaimed 1969 autobiography I Know Why the Caged Bird Sings, as well as for her profoundly moving poetry. But her life and her work encompassed much more.

Angelou was raised in the Deep South, where she lived the horrors of racism and segregation. She was raped at age seven. These experiences shaped the woman she would become. Angelou was a woman who had the courage of her convictions. She had a deep sense of social justice. Few individuals had a stronger understanding of the difference between right and wrong than Maya Angelou.

Angelou was involved in the Civil Rights movement and knew Dr. Martin Luther King, Jr. and Malcolm X. In the film she speaks of her admiration for Malcolm, who wasn't afraid to admit when he was wrong. She also recalls the loss she felt when these two men, who were her heroes, were murdered.

And Still I Rise tells the complete story of Angelou's remarkable life, which inspired her writings. Professionally she wore many hats. Early on she was a dancer, an actress, and a singer. She lived and performed in San Francisco during the 1950s, recording a well-received calypso album during that period. In 1960 she appeared off-Broadway in Jean Genet's groundbreaking avant-garde play The Blacks. Co-stars Cicely Tyson and Lou Gossett, Jr. share their memories of the woman who remained in their lives and inspired them.

Oakland resident Guy Johnson, Angelou's son, also appears throughout the film, sharing some of his own personal and emotional moments with his mom. Johnson's recollections of their relationship paint a lovely portrait of who Angelou was behind closed doors.

Though she soon found herself walking down a different career path, Angelou acted on and off for the rest of her life. She appeared in mainstream Hollywood films like How To Make an American Quilt (1995) and on the TV series Touched by an Angel. No matter where she went, no matter what she did, Angelou carried her sense of social justice with her, inspiring all who crossed her path. In 1993 she had a role in the film Poetic Justice with Janet Jackson and rap artist Tupac Shakur. As she recalls, she chided Shakur for his casual use of the N-word and his calling of women "bitches." She referred to these words as "poison."

"When was the last time anyone told you how important you are?" she said to the angry young man. "Did you know that our people stood on auction blocks for you? Did you know that we got up before sunrise so that you could stay alive?"

LGBT people were also blessed by Angelou's love and support. In an interview seen in the film, Oprah Winfrey recalls attending a party at Angelou's house. As Winfrey tells the story, Angelou stopped the party and asked a guest to leave â€" the guest had been telling a homophobic joke. "Not in my home," Angelou said.

Maya Angelou has left behind an incomparable legacy. Her performances, her writings, her speeches, her activism and her poetry will continue to inspire people for many years to come. When viewing Maya Angelou: And Still I Rise, audiences will experience an up-close-and-personal visit into the life of one of our greatest public figures.

Opens on Oct. 14 at the AMC Van Ness Theater.