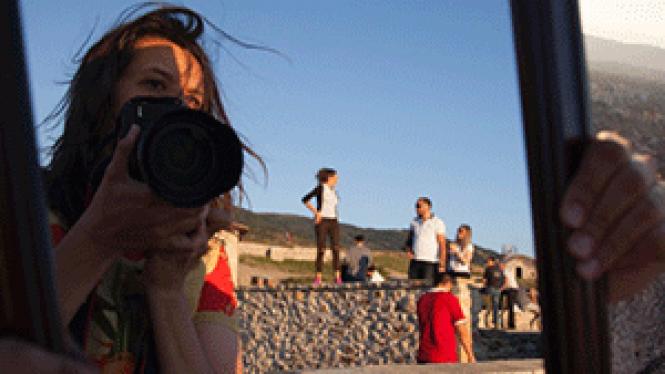 Kirsten Johnson with her camera in Cameraperson.
Photo: Majlinda Hoxha

Back in the early 1950s when I first saw films in theaters, the operators would often permit you to stay through more than one screening. Or if you entered in the middle of a program, they let you stay until you had viewed the whole thing. Kirsten Johnson's Cameraperson is a 102-min. journey through her career as a professional cameraperson on 24 feature-length documentaries, for many notable directors, including Michael Moore. My advice, if you choose to see it, is that you sit through it a second time, even if you have to pay twice.

Cameraperson is one of those rare viewing experiences that may really test your patience, and only you will know if that's a good or bad thing. It's a visual march through a 26-year career shooting a Whitman's Sampler of subjects, often in troubled parts of the globe, interacting with subjects who've seen things many of us would rather not see. Johnson introduces us to an angry amateur boxer, a dead bird, an African midwife at work, a man who remembers a burglary he committed years ago for a good cause, and another who points out exactly where, long ago, wartime atrocities took place in what appears now to be a beautiful stretch of rural forest.

At first Johnson barrels through these painful moments without looking back. Later we revisit some of her subjects. With the young boxer, who has just lost a decision in the ring and looks ready to tear down the arena, the second viewing is a valuable lesson in the control of anger. His pain is mitigated only when he goes back into the arena, where his mother wraps him in her arms. Later in the film, Johnson confesses to a small clutch of survivors of the wars in Bosnia and Herzegovina the joy she feels being again in their company. She also takes us into the fold of her biological family. We meet her Alzheimer's-afflicted mother, her baby twins, and her dad, who volunteers to bury the dead bird.

In her brilliant book-length essay On Photography, the late Susan Sontag warned about taking for granted the meaning of a still photograph. Cameraperson is valuable for the lessons it provides in extending Sontag's warning to the world of moving-picture documentaries. If seeing is believing, just what are we seeing?

Two-thirds of the way through the film, a thoughtful Middle Eastern man warns us of the danger of voyeurism in an age of too many vicarious film experiences available at the click of a dial. But my favorite moment comes during Johnson's work for Moore on Fahrenheit 9/11. Moore, who projects an inner calm even when dealing with dastardly subjects, has just finished interviewing a young African American soldier, and his concern for the young man's fate radiates through Johnson's camera.