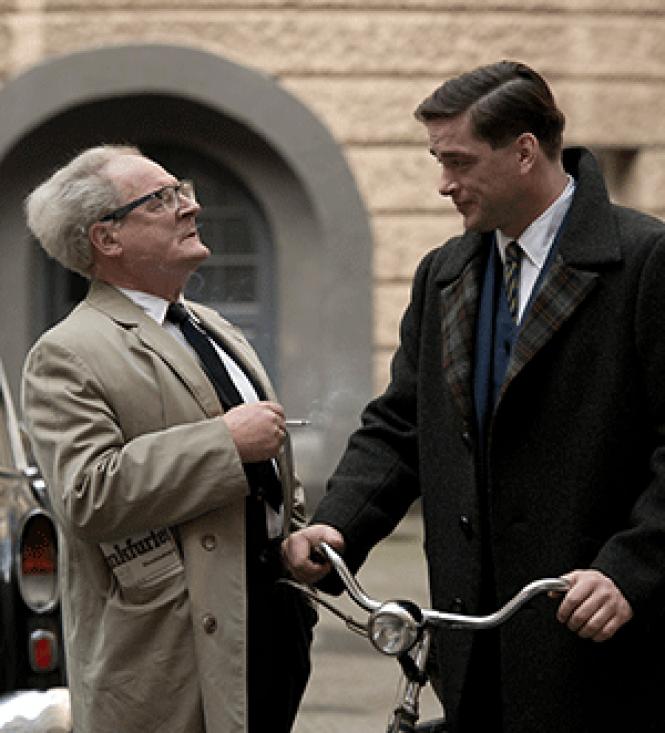 When first we spy him, Fritz Bauer is drowning in his bathtub. He's 54, a chain-smoker of cigars and cigarettes, married to a woman who resides in another country, with a past that includes assignations with Danish male prostitutes during his wartime exile from Hitler's Germany. Bauer, a regional public prosecutor, is about to launch a crusade to arrest Nazi mass-murderer Adolf Eichmann at a time. the mid-50s, when most of his colleagues turned a blind eye to their nation's genocidal past, and to their own flirtation with brutish men bearing swastikas and shiny black boots.

This riveting history-based drama begins with a grainy B&W TV clip of the real Fritz Bauer, who reminds his viewers of the cruel paradox lying at the heart of a Germany rising from its postwar ashes. "Today Germany is proud of its economic miracle. It's also the homeland of Goethe and Beethoven. But Germany's also the country of Hitler, Eichmann and their many henchmen and followers. But just as the day is composed of night and day, the history of each people also has its bright and dark sides. I believe the younger generation of Germany is prepared to learn about Germany's entire history and the whole truth, something which their parents sometimes have difficulty confronting."

Director Lars Kraume quickly shifts our attention across the water to a small office in Buenos Aires, Argentina, where the one-time SS-Obersturmbannfuhrer Adolph Eichmann is holding court for a pair of magazine-writers. Asked "what would have been the best outcome to the Jewish question," the little man (deftly portrayed by Michael Schenk) proudly boasts, "I'll be quite honest with you, if we had killed 10.3 million of the 10.3 million Jews, I would be satisfied and would say, 'Good, we have destroyed an enemy.' We would have fulfilled our mission to protect our blood, our people and the freedom of the people of the world." The ex-bureaucrat adds, "I, too, was to blame for our failure to fully implement the elimination of our enemy as I had conceived it. I was inadequate, I'm guilty of that. In truth, I could and should have done more." So much for Eichmann's later protestations, "I was only following orders."

Next we are thrust into the back seat of a Mercedes limo as Fritz Bauer is interrogated by his boss.

"There are rumors, Fritz. That you tried to kill yourself."

"I've needed pills to help me to sleep for ages."

"As your boss, I can't ignore such rumors."

"I have a pistol. If I decide to kill myself, there won't be any rumors."

The People vs. Fritz Bauer is dogged in its mission to let you know who its unkempt hero was, and why he risked everything, including accusations of treason, to see to it that the surviving Nazi butchers met their appropriate fates. The real problem for Bauer was that he wanted the Nazis to be put on trial in places like Frankfurt, where the German people would witness the process like open-heart surgery without the benefit of anesthesia.

Like most of the best exhumations of Holocaust history â€" Stanley Kramer/Abby Mann's Judgment at Nuremberg comes to mind â€" Fritz Bauer can feel like cinema homework, the filmmakers pausing to poke you in the ribs, "Get it!" The film soars mostly in the scenes between Bauer (a magnificent Burghart Klaussner) and Bauer's young friend/apprentice, the junior prosecutor Karl Angermann (Ronald Zehrfeld), who, in their pursuit of justice, discover how their souls vibrate in mellow synchronicity that might have become an actual relationship. As it is, they are the film's star-crossed lovers.

Like Fassbinder's post-war trilogy (The Marriage of Maria Braun, Lola, Veronika Voss) Fritz Bauer is an engrossing full-submersion baptism into the best and worst of what it meant to be German in the awful middle years of the 20th Century. Just when you think things couldn't get any worse for our closeted hero, they do. Thank God, for us it's only a movie.