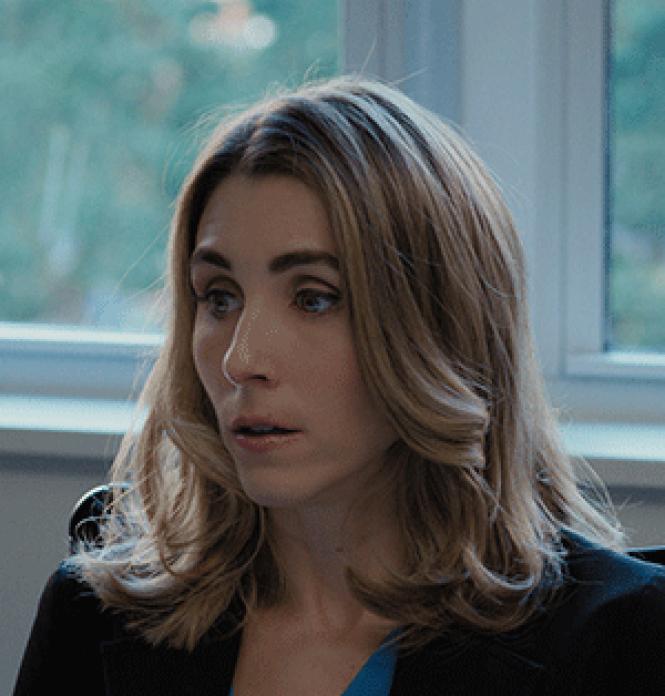 "Meet the She-Wolves of Wall Street!" I came to a screening of Equity thinking this was a fearless peek at lesbians in the pitiless world of high finance and double-dealing, only to discover that perhaps somewhere in the film's creative process there had been a hostile takeover and the gay female content largely submerged under myriad plots and melodramatic hurly-burly. The actual movie is not without interest at a time when many of us feel prisoners of Wall Street machinations, but the filmmakers overplay their hand with a cast befitting a cruise ship vacation, unfortunately without any clear sense of where the boat is heading, or how to disembark before final credits roll.

On the plus side, Equity has the scope and breadth of subject matter better-suited to be a high-powered, multi-season TV series, say The Good Wife for a Trump-era Wall Street. While watching the work of this large, talented, predominantly female cast headed up by Breaking Bad 's Anna Gunn, I kept thinking that each scene felt as overpacked as a trailer for the whole movie.

For the financially illiterate among us, those who have never got much beyond mismanaging their 401K portfolios, Equity 's plot is dense enough to make a remote control rewind button a necessary accessory. As the film opens Gunn's Naomi Bishop is running into heavy waters after steering her clients through nine straight hot streaks. She's called upon to satisfy an especially prickly British client, Ed, saucily portrayed by redhead Samuel Roukin. Since in this world of male and female hyenas you're only as good as your last slick deal, Bishop is challenged to knock one out of the park by her male superiors. Without getting too bogged down in the nitty-gritty details, suffice it to say things go awry, and suddenly Bishop is meeting government securities cops looking for breaches of the law. One of the best scenes finds Naomi challenged by a female Wall Street securities investigator.

"You're investigating a drug deal?"

"I've got a file on everybody."

The film's lesbian content, such as it is, is signaled by two preschoolers with the bratty smarts most often only found at the movies. Kudos are due to director Meera Menon, working from Amy Frank's screenplay. Devoted fans of women-driven cinema may recall Menon's 2013 political comedy Farah Goes Bang, about a young Iranian American woman who attempts to lose her virginity in 2004 while on a cross-country campaign trek for the doomed John Kerry presidential campaign.

In this year of Trump braggadocio, a halfway clever frolic like Equity may relieve the anxiety of waiting out the unthinkable. I would wait for its debut in the Castro Theatre's smart repertory program schedule, which I predict should come up sometime around Election Day.