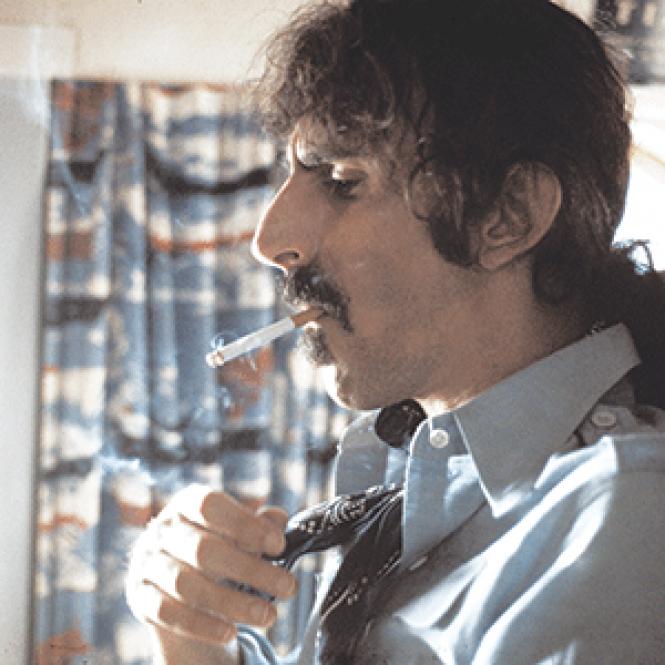 If I had my druthers, the power, and a small cinema needing a terrific film to justify its existence, I would book the new Frank Zappa bio-doc Eat That Question: Frank Zappa in His Own Words into a 30-seater – say, one of the tiny theatres at Opera Plaza – and just leave it there, making sure that as many young people, gay, straight, and everywhere along the Kinsey Scale, got to see it. It opens Friday.

Who the hell was Frank Zappa, anyway? For college radioheads of my generation, playing Zappa (1940-92) on your late-night DJ slot was a sign of cool, a badge of hipness. Looked at 24 years later, Zappa's untimely death at 52 from prostate cancer robbed the world of a comic/musical genius who'd have a field day with today's political landscape. Credit German doc-maker Thorsten Schutte and his editor Willibald Wonneberger with performing a minor miracle in boiling down 37 years of smart Zappa one-liners and rock riffs into an entertaining and pertinent film that many savvy doc-lovers will catch more than once.

A nifty moment unfolds during an early Zappa guest turn on a 1950s edition of the Steve Allen-hosted Tonight show. A clean-shaven, shorthaired Zappa shows Steve a cute trick with an upside-down bicycle. From this cheeky black-and-white TV caper, the filmmakers go to prime-time Zappa, complete with his large mane and sideburns. There follows a barrage of Zappa quips designed to display their author's disdain for the dumbing-down proclivities of America's pop culture.

"Art is making something out of nothing, and selling it."

"If you want to get laid, go to college. If you want an education, go to the library."

"You can't always write a chord ugly enough to say what you want to say, so sometimes you have to rely on a giraffe filled with whipped cream."

"Music is always a commentary on society."

"A composer is a guy who goes around forcing his will on unsuspecting air molecules, often with the assistance of unsuspecting musicians."

"All the good music has already been written by people with wigs and stuff."

"I never set out to be weird. It was always other people who called me weird."

"There is more stupidity than hydrogen in the universe, and it has a longer shelf life"

"The United States is a nation of laws, badly written and randomly enforced. You can't be a real country unless you have a beer and an airline. It helps if you have some kind of a football team, or some nuclear weapons, but at the very least you need a beer."

"Without deviation, progress is not possible."

"Without music to decorate it, time is just a bunch of boring production deadlines or dates by which bills must be paid."

"It isn't necessary to imagine the world ending in fire or ice. There are two other possibilities: one is paperwork, and the other is nostalgia."

"The computer can't tell you the emotional story. It can give you the exact mathematical sign, but what's missing is the eyebrows."

"There are more love songs than anything else. If songs could make you do something, we'd all love one another."

"No change in musical style will survive unless it is accompanied by a change in clothing style. Rock is to dress up to."

Finally, this quote is both pithy and biting, pun intended: "Most people wouldn't know music if it came up and bit them on the ass."