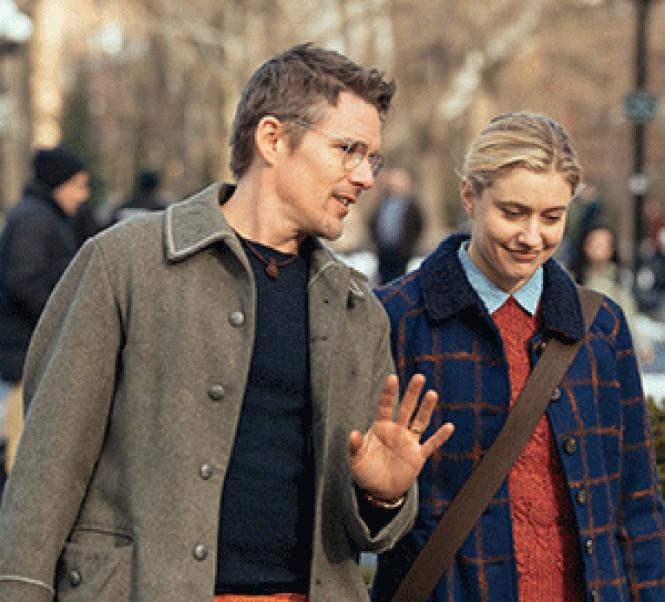 Writer/director Rebecca Miller aims high with Maggie's Plan, a screwballish romantic comedy that's constructed around actress Greta Gerwig as a sweet control-freak who can't resist meddling with the lives of people in her Manhattan social orbit.

Miller, daughter of genius-level American playwright Arthur Miller, has penned four previous films, all of which feature heroines who cope with early, life-defining crises by tossing a dramatic hand-grenade into the proceedings. Miller then carves her film out from the characters who survive the explosion. She bears a slight resemblance to 1970s-era Woody Allen, in that she uses screwball logic to overcome any lapses in dramatic logic contained in her stories. To continue the Woody analogy, Maggie's Plan falls somewhere between Allen's Oscar-awarded valentine to offbeat romantic pairings Annie Hall and his more ambitious and darker take on the same slippery emotional real estate, 1979's Manhattan.

Miller structures her not so laugh-out-loud caper into several chapters, beginning with Maggie Meets John. Here the innocently sly Gerwig lures an early-middle-aged academic (shy-acting Ethan Hawke) into leaving his pushy spouse (foreign-accent-wielding Julianne Moore) for a less-structured relationship with her.

John: "I'm real curious about you."

Maggie: "What aspects of me?"

John: "Every aspect of you!"

In the next chapter, A Change of Heart, Maggie backtracks, wanting to throw her male catch back into a partially frozen pond. "He's totally self-absorbed. I'm afraid I'm falling out of love with him." Her friend Tony (Bill Hader) reminds Maggie that adult romantic flings are more complicated than speed-dialing for high-end consumer goods.

Tony: "Why can't you just break up with him?"

Maggie: "That would be such a waste!"

In my personal favorites of Miller's previous films, Personal Velocity and The Ballad of Jack and Rose, the male characters carried more weight in the prickly outcomes of these novel-like stories. In 2002's Personal Velocity: Three Portraits, Miller constructed a trilogy of short tales about youngish women facing and overcoming personal crises. The third chapter really gripped me and caused me to memorize the name of the young actor who played a pivotal role. A female driver (Fairuza Balk) picks up a teenage boy hitchhiker (Lou Taylor Pucci), dressing the boy's wounds at a cheap motel while delaying a decision on the direction for her own stalled life.

The Ballad of Jack and Rose (2005), Miller's most ambitious drama, is set on a rural island off the coast of Maine, where a wealthy landowner (Miller's real-life husband, Daniel Day-Lewis), a strong-willed idealist, fears he's falling into an incestuous bond with his 16-year-old daughter (Camilla Belle). While Jack frets, the daughter arranges to lose her burdensome virginity to the half-feral son of her father's mistress (Catherine Keener). Young Paul Dano steals his subplot as the designated deflowerer, capping his exploits with sour tags like, "Hey there, little freak!"

While Maggie's Plan lacks the deftly combustible elements that fuel Miller's top-drawer work, it's worth catching for Gerwig, who's a true original. Some of our readers may recall her nifty handling of Ben Stiller's angry-guy chump in 2010's Greenberg, starring Ben Stiller.

An additional selling point for Maggie's Plan is Miller's talent for creating witty, character-enhancing dialogue, as in this scene, where one of Maggie's female friends makes apologies for John's tough-as-nails ex-wife (Moore): "She's been called a monster, but then again, I've often heard myself described as a psychotic bitch, and I think I'm pretty nice!" (Opens Friday.)