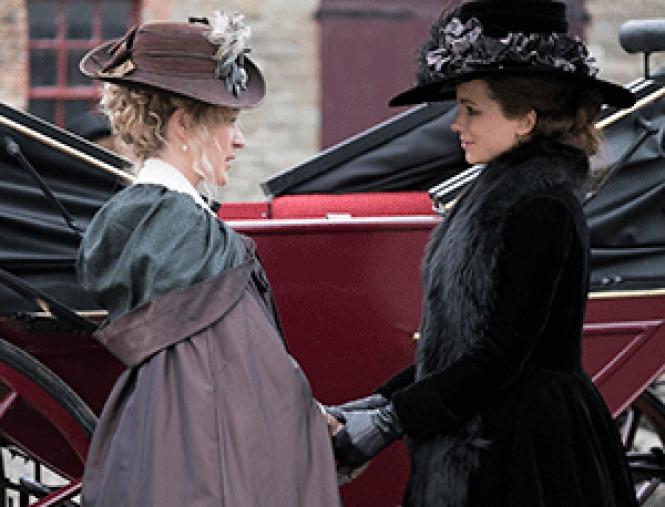 If only he made more films, I'd probably become a fan. If only he lived around the corner from the Cafe Flore, I might develop a taste for coffee. And if he were gay, I'd probably ask him to move in. Alas! John Whitney "Whit" Stillman is a straight American filmmaker who calls Paris home. And I have the difficult job of not quite "friending" his latest film project, Love & Friendship, opening Friday in Bay Area theaters.

Based on an early and somewhat obscure Jane Austen novella, Love & Friendship's title is Stillman's, and he has boasted of expanding on what he considers an unfinished epistolary novella about a widow Austen dubbed Lady Susan. Lady Susan is slyly well-played by Kate Beckinsale, who qualifies as a member of Stillman's film repertory company, having essayed a saucy turn in Whitman's 1998 yuppie romance, The Last Days of Disco. Stillman is probably still best-known for his "yuppie trilogy": 1990's Metropolitan, which garnered him a Best Screenwriting Oscar nomination; 1994's Barcelona; and my personal favorite, the aforementioned Last Days of Disco .

My late British-raised father frequently boasted that he could only abide societies with automobiles and indoor plumbing. Oddly enough, Stillman's switching the setting of his latest film from his usual gaggle of hip Manhattan Caucasian socialites, with their amusing blend of narcissism and late-20th-century Western pop decadence, to Austen's 1790s British pre-Regency period gives his witty, downright bitchy characters (especially Lady Susan and her female pals) an unsettling fish-out-of-water quality. In other words, instead of relishing Lady Susan's tricky schemes to ensnare eligible bachelors, we are left admiring the proceedings as a bit of creative anachronism rather than, say, an Oscar Wilde-worthy exercise in savage social satire.

To his credit and regardless of the century he's trolling through, Stillman never fails to create a scintillating group of social manipulators, always armed with the gift of gab. Fans of another American filmmaker who's equally adept at skewering the rich and overprivileged in East Coast American society, Burr Steers, may recall the naughty fun his poor little rich boy Igby (Kieran Culkin) had in getting the upper crust to show their cards for keeping their place among the 1%. Igby Goes Down (2002), with its impish miscreant who refuses to bow to authority (and who gets a cautionary beating from a humorless stepdad), demonstrates the mistake Stillman makes in keeping us historically and emotionally removed from the pertinent themes of his story. With the rogue-elephant candidate Trump scheming to make the rich even richer while flying the flag of a "populist" out to rescue the common guy, Stillman's acute sense of the folly of privilege would be a great and entertaining weapon to display in the run-up to what will probably be a crucial national election.

Some of you, especially the Jane Austen fans, may choose to spit on this review; after all, it's not everyday that we get to submerge ourselves in the wit, wisdom and humor of another, seemingly grander age. For the embattled minority who side with my views, I hold up the gleeful sarcasm of Steers' unrepentant Igby, who at the peak of his own travails with rich snobs including his Republican brother. exclaims with gusto, "I'm drowning in assholes!"Â

In the event that I've been unfair to Stillman, I'm appending a bit of my 2012 San Francisco chat with this thoroughly delightful artist, attired in the preppie uniform of striped dress shirt, sleeves rolled up, no tie. Our talk was a true conversation. Here's one celebrity who's listening to the questions, not merely dispensing prefab replies.

Whit Stillman: It's interesting that you mention those names because, in a sense, we all came out of 1980s filmmaking, and it's odd now that the 80s are back. Jim Jarmusch was a big inspiration, making Stranger Than Paradise so disciplined and so funny on a tight budget.

How did you meet Burr Steers, the haughty bouncer from The Last Days of Disco, whose debut film Igby Goes Down feels like a sequel to your trilogy?

He was very good as the "door Nazi," he has that wonderful accent. He's Gore Vidal's nephew.

Gore Vidal has a cameo as one of Igby's disgusted headmasters.

Burr's had a terrific career.

Is it true that your parents' traumatic divorce has provided a career's worth of material from a hard-earned perspective?

There are people who tear their hair out about divorce in America, not me. It can be quite liberating to have your parents divorce. For me, the divorce was good, the remarriage was bad.