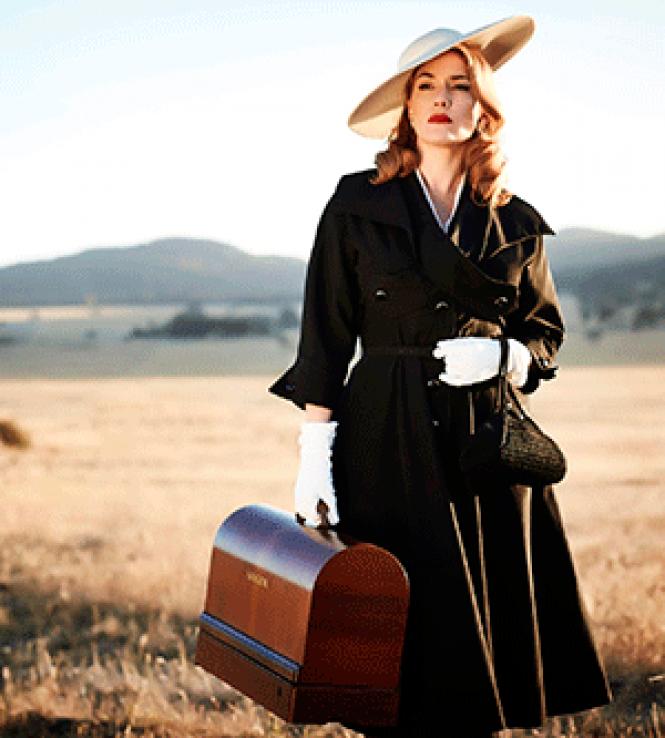 Director Jocelyn Moorhouse's The
Dressmaker is a screwball comedy/melodrama
set in the 1950s starring Kate Winslet.

A relative newcomer founded just eight years ago by former San Francisco Chronicle movie editor Ruthe Stein, the astutely programmed Mostly British Film Festival has developed into one of the best homegrown boutique film events on the local scene. Featuring classics and first-run movies on their way to theatrical release, the week-long fest's accent is on the "mostly" rather than purely British, though British Noir Night is an annual staple. This year's doubleheader includes two hard-boiled gems: Jules Dassin's Night and the City, a seamy noir about a con man (Richard Widmark) always looking for the main chance whose schemes go awry in the violent underworld of 1950s London; and The Long Good Friday, in which the late great Bob Hoskins plays a tough-as-nails East End gangster kingpin who hatches a plan to go legit by hitching his star to the 1988 Olympics.

There's an especially strong contingent of films from Down Under. The Aussies, those lucky mates, are blessed with a supportive national film industry matched by a deep bench of talent in front of and behind the camera like director Jocelyn Moorhouse, who made her debut with the 1991 film Proof, featuring a nascent, hard-to-miss Russell Crowe in a supporting part. Moorhouse, returning to the director's chair after an 18-year break, helms the festival opener The Dressmaker, a goofy screwball comedy/melodrama mash-up set in the 1950s. The top-notch cast is led by Kate Winslet, who follows her Oscar-nominated turn as Steve Jobs' girl Friday/ mother/marketing whiz with Tilly, an ultra-chic, Paris-trained fashion designer with a past. Like an outlaw riding into a dusty town a la Clint Eastwood, she arrives in the rural Australian hamlet that shunned her with a coquettish wide-brimmed hat on her head and vengeance on her mind. Ostensibly, she's come home to care for her cranky, ailing mother, portrayed by the reliably acidic, hilarious scene-stealer Judy Davis, but in short order, she's parading around in knockout ensembles, giving the frumpy female populace a glamour makeover; a handsome hunk in the form of Liam Hemsworth injects requisite romantic spark; and Hugo Weaving provides comic relief as a local cop who crossdresses in designer duds in his spare time.

Weaving, best-known as the ominous, ever-multiplying Agent Smith in The Matrix and the half-Elven ruler of The Lord of the Rings, also appears in the family drama Strangerland, opposite fellow Aussie Nicole Kidman. Kidman goes brunette, downscale and distraught for the role of a frustrated, emotionally starved wife living in the starkly beautiful Outback with an aloof husband (Joseph Fiennes) and two teenagers who run away into the vast expanses one hot summer night, fleeing their dead-end desert town and domestic discord. The harsh, unforgiving landscape, shot in deep-focus, majestic widescreen, mirrors the barrenness of the characters' interior lives, while the desperate attempts to find the children power the narrative. Weaving, the police detective who supplies Kidman with unnerving sexual chemistry along with his investigative skills, uncovers more about the troubled couple's background than they care to share.

Switching gears in more ways than one, Gilliam Armstrong's provocatively titled documentary Women He's Undressed is an unorthodox portrait of Orry-Kelly, who left an Australian coastal backwater in the 1920s and set out to make it big in old Hollywood. Succeeding beyond his wildest dreams, he became an Academy Award-winning costume designer to the stars, from Bette Davis, Ava Gardner and Marilyn Monroe in Some Like it Hot to dashing leading men such as Bogart and Errol Flynn. Though An American in Paris, Casablanca and 42nd Street are among his stellar list of credits, few people, especially in his native Australia, have ever heard of him. His extravagant, jaw-dropping creations were out there, but the gay Orry-Kelly was not. He may have feared jeopardizing his career in a then-homophobic industry; however, that didn't stop him from havingÂ affairs, including an early one with none other than a young, scrumptious Cary Grant. Armstrong, the Australian director of the feminist masterpiece My Brilliant Career, interweaves archival materials and commentary from friends and colleagues with sequences in which an actor playing Orry-Kelly serves up pithy observations. You can check out his unadulterated voice in his recently published memoir Women I've Undressed, which was discovered stuffed in a pillowcase.

Anyone who's a sucker for underdog racehorse sagas that make you want to stand up and shout (and this writer is one of them) should not miss Louise Osmond's documentary Dark Horse, the beating-the-odds, come-from-behind true tale of Dream Alliance, the Welsh working-class answer to Seabiscuit. The horse's hardscrabble owners, a barmaid, her husband, and a tax advisor from a down-and-nearly-out coal-mining town in Wales, entered a sport dominated by toffs whose steeds had superior breeding and bloodlines, not to mention cushier accommodations. Using video footage, old photos, reenactments and interviews with the spunky local inhabitants, Osmond reconstructs a story of a willful, competitive animal who could and did, and the town that loved her for it.