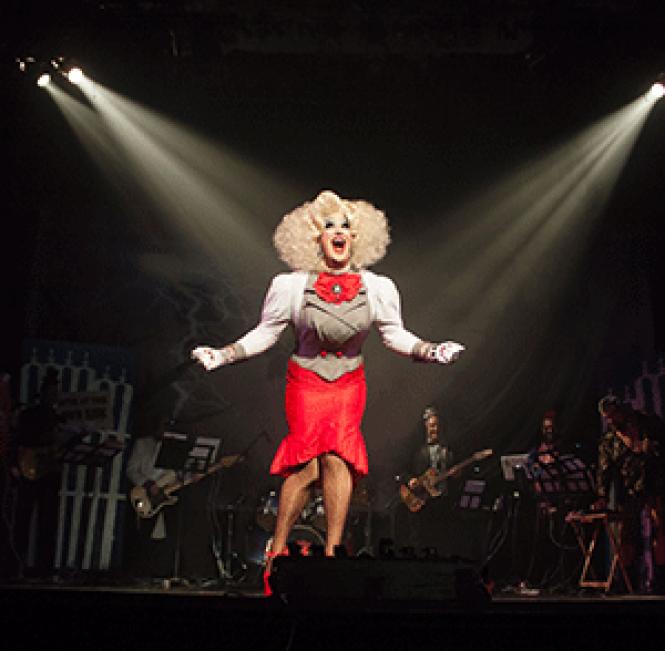 A cross-dressing mad scientist and his hunky, scantily clad creation will soon be holding court in the hallowed halls of the San Francisco Symphony. It all happens when drag icon Peaches Christ brings the queer cult classic The Rocky Horror Picture Show to Davies Symphony Hall. The night promises to be a wildly creepy and sexy salute to Halloween, one of the holiest nights on the queer calendar. You'll get to do the time warp again with a musical pre-show, followed by a hosted screening of the film. Be there or be square on October 31 at 7:30 p.m.

"For me, Rocky Horror was my version of an It Gets Better video when I was a teenager," Peaches Christ's alter-ego Joshua Grannell told the B.A.R. "When I discovered John Waters films and Rocky Horror, my life was forever changed, and my view of the world was so much better. Rocky Horror showed me that there was a place for a freaky queer kid drawn toward drag and cross-dressing. The overall message of the film is don't dream it, be it, and it's something I really took to heart."

The evening, Grannell said, was the Symphony's idea. "The San Francisco Symphony reached out to me and asked if I was interested in doing an event like this, and I jumped at the chance," he said. "They included me on the curation of the music that the orchestra will play as part of the pre-show, and agreed with me that Latrice Royale would be a wonderful co-hostess."

Royale is a seasoned drag performer who came to national prominence through appearances on RuPaul's Drag Race. She has since released a single, "Weight," and has performed with Jennifer Hudson. Royale is also an ordained minister who performs same-sex weddings.

Rocky Horror audiences can be quite rabid and rambunctious. At regularly scheduled midnight screenings of the film, audience members have been known to throw rice at the film's opening wedding scene. Further into the film, hundreds of rolls of Scott Tissues are tossed at the first appearance of the character Dr. Scott. "From what I understand, the Symphony is not creating a rule against this, which is amazing," said Grannell.

Cast from a previous production of The Rocky Horror Picture Show.

So what can attendees expect when the envelope-pushing Rocky Horror comes to the usually staid Davies?

"You can expect to hear some of the best, most iconic horror movie orchestrations played live," said Grannell. "There's even Dorit Chrysler, a special guest Theremin player coming from Los Angeles to help add a little extra something special to the evening. There's also a bit of local selections of spooky music that has significance specifically to San Francisco." Grannell added that the spectacle and glamour of Royale were an added bonus, and encourages attendees to wear costumes.

Peaches Christ has definitely come up in the world since she hosted midnight movies at the now-shuttered Bridge Theater on Geary Blvd. Peaches has graduated from the 400-500-seat Bridge to selling out at the 1,400-seat Castro Theater, and now makes regular appearances around the country. The diva adds the prestigious Davies Symphony Hall as the latest feather in her cap. Grannell said it feels "kinda surreal" to appear at such important institutions. "These venues are as legit as it gets," he said. "I built a career as a drag performer named after Jesus, screening cult movies with pre-shows that feature acts like mother-daughter mud-wrestling. So it's all really wonderful." Grannell noted that he has also just hosted an event at the American Film Institute in Washington, DC. "It's weird," he said.

Also, be sure to join Peaches for a spooky Halloween drag show at Oasis after the Rocky Horror event, which fellow drag icon Heklina will co-host.