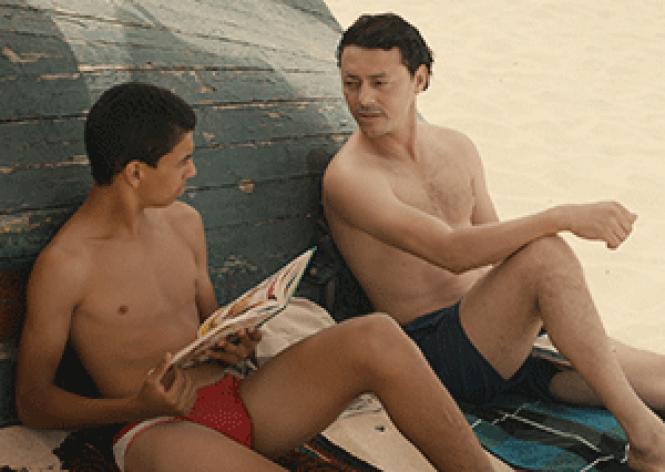 Salvation Army Abdellah Taia embeds us inside an extended Moroccan clan as a shy, queer Arab boy (Taia's younger self) plots to escape the tyranny of family and the benevolent but still painful exploitation of foreign sex tourists. (Kabuki, 5/2, 6; BAM/PFA, 5/4)

Eastern Boys Robin Campillo serves up a slow-simmering, all-male erotic thriller that kicks off in Paris' busiest train station, the Gare du Nord, as Daniel (Olivier Rabourdin), a hunky 50ish businessman, searches for a young hustler among the gaggle of rent boys loitering about. Striking what he believes is a decent bargain with a comely lad, Marek (Kirill Emelyanov), Daniel gives the kid the address to his suburban high-rise pad. At the appointed hour, the bell rings, Daniel answers, and the phrase "He got more than he bargained for" has never rung so true. Into the flat pours a Les Miserables-worthy army of boy hustlers, led by a rascal nicknamed "Boss" (Danill Vorobyev). First they trash the joint and terrorize Daniel, then they proceed to party down. Eventually Marek shows up, allows Daniel to penetrate him, collects his 50 Euros, and begins an Arabian Nights-worthy succession of erotic encounters that, strangely enough, turn into a complex relationship, somewhere between lover and adopted son. Campillo has the boy make a soulful confession inside a French mall. Marek is actually a Ukrainian refugee named Rouslan who suffers bad-dad ties with the Boss. How this all sorts itself out is a nail-biting treat. Young Emelyanov, who bears a resemblance to Canadian hottie star Gregory Smith, is one of French cinema's best steal-your-heart wounded kids since the young waif in Patrice Chereau's late-80s queer classic L'Homme Blesse (The Wounded Man ). (Kabuki, 5/2; New People, 5/4)

Harmony Lessons Kazakhstan's Emir Baigazin stages a chilling if aesthetically compelling coup among the ranks of a prep-school student body cowed by a gangster in their midst. The physical beauty of these boys, whose motives and methods would frighten even Lady Macbeth, is complemented by Baigazin's style, a cinema of austere understatement. These adolescent schemers will remind you of the wicked-boy vigilantes in Keith Gordon's audacious classic The Chocolate War, or Ezra Miller's schoolboy paralyzed by envy and ennui in the dark corridors of Antonio Campos' Afterschool. (Kabuki, 5/4, 5)

Stop the Pounding Heart Roberto Minervini spends 100 minutes observing the lives of a rural East Texas female goat farmer and the handsome young rodeo bull-rider she slyly covets. Sara and Colby are as discreet around each other as if they were each other's chaperones rather than possible life partners, in a part of the country where folks can still really mean "Til death do us part." The poetic title derives from advice whispered in Sara's ear by a loving mom. (Kabuki, 5/4; New People, 5/6)

Freedom Summer Stanley Nelson offers a gripping account of the season that would forever alter the bastion of Jim Crow. As Phil Ochs would sing, "Here's to the state of Mississippi." As a 20-year-old college student, I was both envious of and intimidated by the quiet audacity of hundreds of my peers braving the clubs of redneck sheriffs and worse; the worse â€" hauntingly recalled here â€" was a most shameful day in modern American history when the bodies of civil rights workers James Chaney, Andrew Goodman and Michael Schwerner were dug from muddy graves. Nelson provides a chorus of voices, white and black, achingly young then, older and wiser now, but still proud of their great moment. We witness the courage of ordinary African Americans who dared shelter "outside agitators," along with the historic moment when Fannie Lou Hamer defied a president by seeking to oust a lily-white Mississippi delegation to the Atlantic City "coronation" of President Lyndon Baines Johnson. Nelson's crowning achievement is his LBJ, here displaying the cunning, paranoia and ruthless opportunism that would inspire Barbara Garson's withering 1967 satire MacBird. (Kabuki, 5/3, 7)

The Last Weekend For as long as they can remember, the Green family â€" Mama, Poppa, two sons, one gay, one lost â€" have been spending their summers at a lovely if cluttered Lake Tahoe getaway house. Mama Celia (a take-no-prisoners diva turn from Patricia Clarkson) is meaning for this Labor Day weekend to be the end of it all, for reasons even she doesn't fully understand. Gay son Theo (Zachary Booth) has brought a lovely new friend, Luke (Devon Graye), to the party, while straight bro Roger (Joseph Cross) is taking advantage of the house's no-WiFi zone to shield Poppa (Chris Mulkey) from his latest workplace meltdown â€" fired for losing millions pushing the wrong button in a stock trade. Celia keeps adding to her knickknacks, Luke frets that Theo can't see his soul, and handyman Hector (Julio Oscar Mechoso) mixes water and electricity dockside, prompting a hospital visit. It isn't O'Neill's Tyrone clan, but directors Tom Dolby and Tom Williams provide an entertaining Left Coast version of a Long Island Gold Coast lifestyle. (Kabuki, 5/2; New People, 5/5)

The Lady Eve (1941) His dad was a steel tycoon, his mom a flighty bohemian sidekick to artiste Isadora Duncan, so Preston Sturges came honestly to his satiric insights on the dangers of common folk mingling with the 1%. The pratfall-laced shipboard romance that ensues between a young brewery heir/snake specialist (Henry Fonda) and a confidence trickster played to the nines by Barbara Stanwyck in her prime is still fresh and naughty fun. Sturges believed there was a special gateway to the funny bone produced by a merger of sophisticated dialogue and physical gags. "I had my fingers crossed when [Fonda] went over the sofa. I held my left ear when he tore down the curtains, and I held everything when the roast beef hit him. But audiences surrendered to the fun, and the picture made a lot of money." This classic comedy is presented by critic David Thomson. (Kabuki, 5/4)