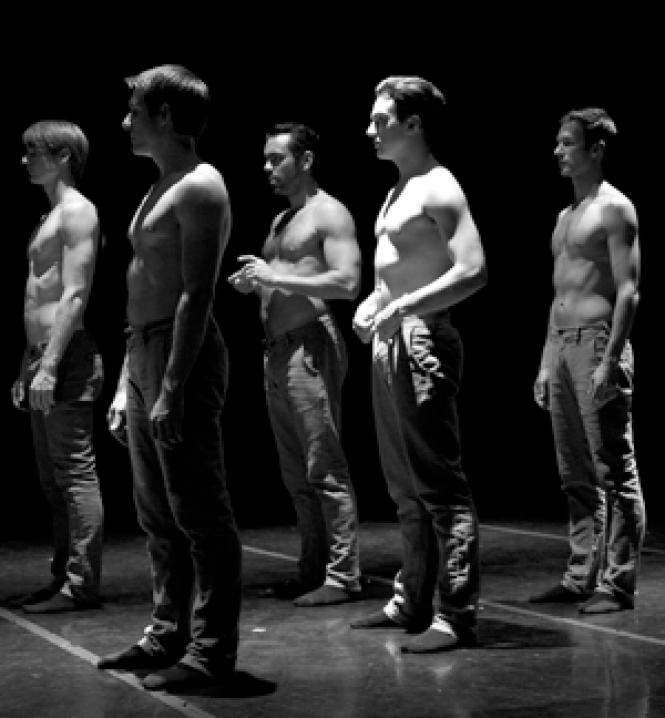 The final four days of Frameline 37 contain some gems â€" as well as some clunkers â€" that can easily be missed in the frenzy leading up to Pride Day.

Test This hugely entertaining time capsule, set in San Francisco's protean modern-dance world, makes both harrowing and playful use of that fateful moment when the first blood-test for the HIV virus debuted. It's 1985, and a lithe, downright pretty young male dancer, Frankie, stumbles upon a vicious oxymoron: how to please an ill-tempered choreographer who hates the idea of a queer-acting dancer performing a piece that is swimming in gay visual metaphors.

"I don't care who you fuck, I care how you dance. Dance like a fucking man! Think what that might mean physically, in your feet, in your hands, in your neck!"

Frankie's less blatantly queer fellow dancers provide straight-acting tips: "When you come out of this turn, watch the head, it's more manly. If you laugh like this it looks gay, but if you laugh with your head straight â€""

Born This Way Up until now, concerns over religiously fueled homophobia in Africa have been limited to Uganda, where white American fundies have lobbied for draconian anti-gay laws, but this new doc dramatically illustrates that the bias virus is spreading, this time to the former French colony of Cameroon. Directors Shaun Kadlec and Deb Tullmann provide evidence that queer Cameroon natives are at daily risk of vigilante violence and draconian laws that make the most innocent kind of same-sex noodling subject to five years in the slammer. The filmmakers focus their well-researched and elegantly filmed doc on the efforts of big-city gays to staff a drop-in center; on a legal beagle who's trying to get a test case to overturn bad laws to the Cameroon Supreme Court; and on the efforts of two young queer activists to simply live their lives.

Gertrude, raised by French Catholic nuns, has fretted over whether the aging sister who mentored her would be receptive to a coming-out speech. The rural-born, fashion-obsessed Cedric (Lady Gaga is his avatar) hesitates to tell his small-town mom, and faces death threats if he doesn't move from his city neighborhood. A highlight comes when a young butch dyke regales a straight male cab driver with the intimate details of her life while the two cruise over a winding two-lane highway that could as easily be in Northern California. (Castro, 6/28)

Beyond the Walls Director David Lambert adds a Belgian entry to the recent wave of complicated male/male relationship films (Weekend, Keep the Lights On). Teddy-bear cute Paolo (Matila Malliarakis) meets Albanian refugee Ilir (Guillaume Gouix) as the latter is tending a wine bar and the younger man is becoming passed-out drunk. Their one night resonates to the point that Paolo incites his girlfriend to kick him out in the middle of the night. Nothing except their fucking is an easy fit, and as the now live-in affair progresses, nothing is certain. An afternoon's shopping expedition gets interesting as Ilir causes a comic commotion in the supermarket, much to his young boyfriend's consternation.

"Do they have rubbers here?"

"What are you doing?"

"It's time we did some ass-fucking, I'm sick of playing games."

"Oh, you're embarrassed. I thought you wanted everything out in the open?" Ilir grabs the store mike and introduces his lover to the crowd of shoppers. "Can anyone help? Because you can never be too gay."

There's a fabulous moment as Ilir heads out on a short trip back home. Paolo is encumbered in a leather shop's version of a male chastity belt, and as his boyfriend pulls back on the train station's moving walkway there's a great visual joke as the boyish man stumbles forward for a parting kiss. Lambert finds a unique way to test the ties that bind two men whom fate has so absurdly yoked together. (Castro, 6/27)

F to 7th: Tweener Director Ingrid Jungermann tucks inside the sidelines at a woman's softball game as an old-line butch reads outdated rules of the butch universe to a lesbian friend who's decidedly "new school" about gender rules and roles. (Fun in Girls Shorts, Castro, 6/30)

Yeah Kowalski! "When will my armpit hair grow?" This knotty question in hygiene class sends 13-year-old Gabe (Cameron Wofford) off on a disastrous pool-party misadventure, as he tries to impress a well-endowed blonde crush (Conor Donnelly). Director Evan Roberts pushes the boundaries of prepubescent angst. (Fun in Boy Shorts, Castro, 6/30)

He's Way More Famous Than You This ambitious but over-the-top satire begins promisingly before descending into a Saturday Night Live skit-on-steroids fiasco. Halley Feiffer is at the core of what could have been right and what turns out so wrong about this comedy for the Ugly Betty crowd. Feiffer (daughter of legendary Village Voice cartoonist Jules) plays herself as boiling over with ambition, fueled by her brief fame as the girlfriend to Jesse Eisenberg's plagiarizing schoolkid in Noah Baumbach's The Squid and the Whale. Halle's career has been on hold ever since, so she intimidates her dweeb boyfriend into writing a one-woman comeback vehicle.

Amusing at first, Feiffer slips into vanity overdrive, alienating the boyfriend, her agent and even her gay kid-brother, whose TV-star boyfriend Michael Urie, the actual director of this movie, she wants as her director. Cameos from real stars as themselves provide joyful respite â€" Ben Stiller is a grumpy standout. Ironically, Jesse Eisenberg gives a lesson on what could have been with his low-key vibe as a festival judge, and by his Oscar-nominated turn as the socially inept social-networking genius in The Social Network. Eisenberg's potentially toxic take on a take-no-prisoners Mark Zuckerberg was softened but not blunted through craft and the firm hand of director David Fincher. Feiffer doesn't shift gears, display a less grating side, or earn anything from her nonstop meltdown. In their Squid and Whale climactic scene, Eisenberg's character put a prophetic punctuation on their breakup. "Don't be difficult." (Castro, 6/29)

The Secret Disco Revolution Deep into Jamie Kastner's "documentary" on the "revolutionary" impact that the 70s disco movement had on black, gay and female club-kids, a female scholar calls Donna Summer's 1975 hit "Love to Love You Baby" "the musical expression of the feminist critique of three-minute sex." This pop socio-babble represents the intellectual high point of a cheesy compilation film that's a cross between a K-Tel hits album and one of those freeze-dried oldies programs that go viral during PBS pledge week. As a 60s Top 40 radio fan who morphed into a 70s urban Texas gay club-kid and then an 80s End Up bar worker, I was happy to see mini-chats with disco queens Thelma Houston and Gloria Gaynor, but frustrated at the shallow stabs Kastner makes at connecting the dots between payola-influenced AM airplay, fledgling college/FM album-rock stations, maverick disco-dance shows and the fast-spreading queer dance-club circuit from NY's Continental Baths to Texas' Bayou Landings to San Francisco's I-Beam and Trocadero Transfer discos. In some ways, disco assaulted radio and the record industry as insidiously as the digital upheaval to come. Give us a queer Ken Burns and not this schlock, tarted up by images ripped off from the 60s ABC-TV hit The Mod Squad. (Victoria, 6/29; opens 6/28 at Landmark Theatres)