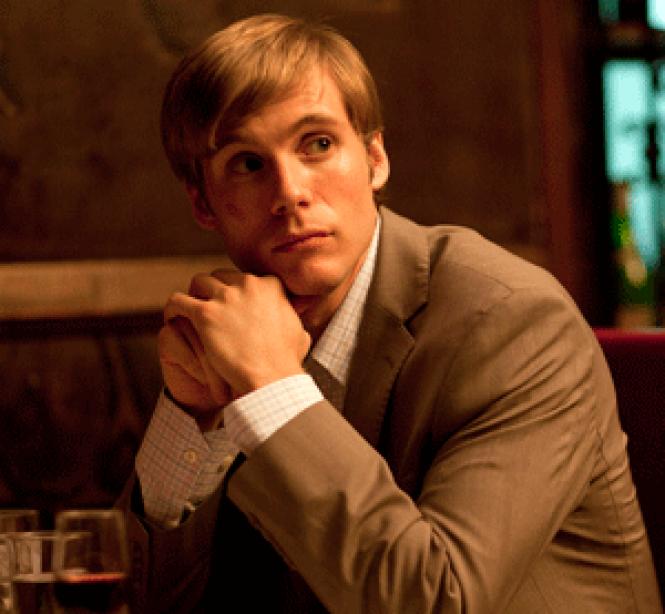 Zachary Booth as Paul in director Ira Sachs'
Keep the
Lights On.

1. Keep the Lights On begins in a shabby East Village walk-up as Eric (Thure Lindhardt), a ruggedly handsome blonde top, arranges a sex-line hookup with a lawyer just coming out, Paul (Zachary Booth). The physical connection is electric, and Eric and Paul are soon a couple bound together by bedroom chemistry but hobbled by career and personal differences. Director Ira Sachs provides a rigorously honest account of how two emotionally incompatible men struggle to preserve a relationship, only to collapse in a burst of mutual candor.

(with:) The Master With parallels to Paul Thomas Anderson's oilman/preacher mud-fight There Will Be Blood, one huge difference is the presence of a towering female character, Peggy Dodd (Amy Adams). As with Blood, where Daniel Day-Lewis' bullying oilman and Paul Dano's duplicitous preacher see through each other, the hard-drinking Freddie (Joaquin Phoenix) and Dodd (Philip Seymour Hoffman), modeled on Scientology's L. Ron Hubbard, are hip to each other's game. This time, it's the spiritual conman who's drinking the milkshake.

2. Perks of Being a Wallflower Stephen Chbosky's decision to translate his MTV cult novel into a movie where "the gay kid is the coolest kid" pays huge dividends, especially in a breakout performance by the sassy Ezra Miller. Miller's Patrick, who won't take no guff from his closeted jock boyfriend, becomes a role model and cheerleader for pals Charlie (Logan Lerman) and Sam (Emma Watson). Watson gives her American accent a hefty test-run as a graduating senior saddled with a faithless beau. "We accept the love we think we deserve."

(with:) The Wise Kids Stephen Cone's ensemble piece, inspired by a Charleston, SC church youth group, tracks the centrifugal forces unleashed when a church's "good school citizen," its brightest, sweetest, and most likely to succeed skinny young man (Tyler Ross), allows his heart to pull him off his faith.

3. Lincoln In an epic first act, the equal of anything in the David Lean canon, Steven Spielberg and gay playwright Tony Kushner frame the awful dilemma Lincoln faced in his last four months. Based on Team of Rivals by Doris Kearns Goodwin, Lincoln soars as we watch him outmaneuver the fractious men he has chosen for his war cabinet. Spielberg reportedly snapped a camera-phone picture of Daniel Day-Lewis where his silhouette so closely resembled Lincoln's that the image might have fooled even Civil War photographer Mathew Brady.

4. Being Flynn Adapting from Nick Flynn's darkly funny memoir Another Bullshit Night in Suck City, Paul Weitz's film kicks off with the ravings of a delusional egotist ("America has produced only three classic writers: Mark Twain, J.D. Salinger and me.") Being Flynn would be a lot less fun if Robert De Niro's racist, homophobic old ingrate weren't trumped by arguably the best actor of his generation, Paul Dano.

Patrick Wang as Joey, and Trevor St. John as Cody, in director Wang's In the Family.

5. In the Family For nearly three hours, director Patrick Wang earns his grip on our emotions. Six-year-old Chip enjoys a Capra-corn childhood with his not necessarily gay-identified Tennessee dads. Emotional landmines surface between Joey (Wang) and his dead lover's sister over the fate of Chip and everything this Asian "Bubba" holds dear.

(with:) Cloudburst In Canadian director Thom Fitzgerald's profane lesbian road comedy, Olympia Dukakis forms a tempestuous coupling with the demure Brenda Fricker. Both women make you root for running away from home at 70.

6. Without Mark Jackson's psychologically acute script walks us through an emotionally naked checklist for a guilt- and grief-ridden character still caught up in the limerence of young love. Without can be enjoyed as anything from a lesbian Spanking the Monkey to a young male auteur's dip into Kelly Reichardt territory.

(with:) The Deep Blue Sea Terence Rattigan meets Terence Davies. Drama by a happy closeted British playwright is updated in a beautifully staged, emotionally precise screen version by an openly gay if unhappy filmmaker whose greatest work commemorates the bleak post-WWII years when Britain, for a time, misplaced its greatness.

7. West of Memphis Amy Berg conducts a thorough anatomy of a two-decade miscarriage of justice as three Arkansas teens are falsely accused of the horrific murders of three grammar-school boys. With tabloids citing "satanic cults" and "heavy-metal rock intoxication," the trio was convicted on the skimpiest of evidence, which unraveled after new investigations. This engrossing doc uncovers a devastating crime perpetuated by "Southern justice."

(with:) Central Park Five Ken and Sarah Burns zoom in on a 1989 Gotham night when race, paranoia about crime, a rogue criminal-justice system, a racially insensitive mayor, and a bombastic media ganged up for a "judicial lynching" of five multiracial teens. The doc chillingly illustrates why innocent kids would "confess" to a crime they had no knowledge of, and how exonerating DNA evidence failed to set the record straight.

(with:) The Kid with a Bike and Sister We salute two boy actors whose talents pushed the boundaries of kids on screen. Thomas Doret stars for Belgium's Dardenne Brothers as a virtual orphan desperately seeking the return of his precious 10-speed along with his vanished dad. Ursula Meier's Kacey Mottet Klein shows us a protean capitalist robbing rich tourists to support a feckless sibling.

9. Rampart Oren Moverman's incendiary police procedural finds Woody Harrelson building on his portrait of a troubled, alcoholic loner (The Messenger) to create a scarier archetype: the rogue cop from hell whose capacity for inflicting criminal levels of mayhem is exceeded only by self-justifying bullshit to keep the brass off his case.

(with:) The Waiting Room Peter Nicks' cameras witness America's version of "socialized medicine." Oakland's Highland Hospital is the last stop for the desperately ill unlucky enough to be indigent or uninsured. A 20ish white vegan appears with medical tests from Kaiser indicating he has testicular cancer. "This is a major wake-up call."

11. North Sea Texas Bavo Defurne reworks the coming-of-age tale to reveal the bumpy puberty of Pim (Jelle Florizoone), who finds true love at 15, only to lose his older pal to the latter's belief that he's outgrown their backyard wrestling. Defurne sets his story in a sumptuously photographed 70s Belgium seacoast town that resembles a seaside Oz as imagined by Pierre et Gille.

(with:) Beasts of the Southern Wild In Benh Zeitlin's audacious post-Katrina, African American folk story, a female Huck Finn fights to survive the storm with a drunken, difficult Daddy.