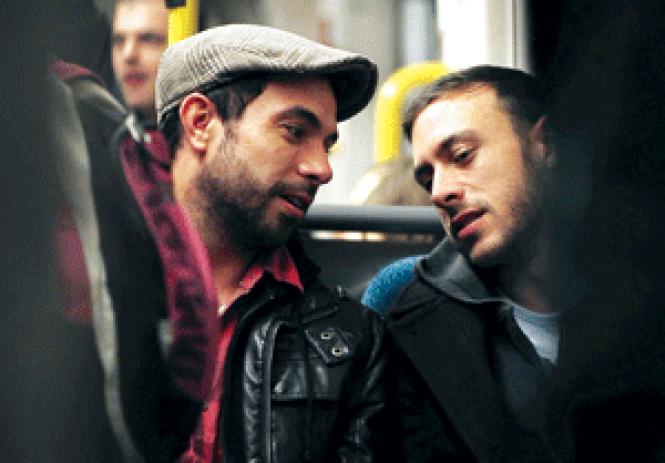 The list of best films is again tied at the top, in a year with solid queer features, especially films exploring the wide world of gender. Think of them as a bumper crop of Castro Theatre thematic double bills.

1. Weekend: In the year's crossover queer hit, Andrew Haigh introduces British lads of opposite temperaments who unexpectedly find themselves going steady over a couple of bumpy nights. The closeted Russell and the pranky Glen ("I don't do boyfriends") conjure at a dance club, and find themselves more than physically naked. As the two slug it out on queer hot-button topics, we root for this queer Before Sunrise couple to find a lasting bond.

1. (2) Pariah: Dee Rees plants an African-American baby butch (Adepere Oduye) in lovely limbo between a hot dyke Brooklyn club scene and the cell phone tether of her conservative parents. Rees creates saucy plotlines, such as Alike's complex but positive relationship with her NYPD detective Dad, and the delicious irony that Mom, trying her best to end Alike's "tomboy" phase, actually steers her towards a hot overnighter with a church lady's daughter.

2. Tomboy: In Celine Sciamma's lovely fable on how gender trumps everything as we enter the magic garden of adolescence, a 10-year-old is sitting in Daddy's lap getting a playful driving lesson. Observing Laure (the impeccably androgynous Zoe Heran) interact with her loving parents and sassy but thoroughly feminine kid sister is getting a privileged pass to a childhood paradise immediately before the loss of innocence. With a whiff of Truffaut's genius for capturing kids at play, Sciamma frames Laure's bold move as the new kid in town as she declares to a would-be friend, "My name is Mikael."

2. (2) The Iron Lady: Abi Morgan's bold script has Meryl Streep's Lady Margaret Thatcher hearing voices and experiencing a full-bodied apparition of her late hubby Dennis. This darkly clever film is about class warfare â€" not Thatcher beating up on Billy Elliot's coal-miner dad â€" no, class war among the Tories, as Thatcher misses few chances to humiliate the old Etonians in her cabinet.

3. 3: In Tom Tykwer's postmodern comedy, an unwed but very old-shoe couple is trying to recharge their sex by recycling their favorite quarrels. Since this is a German comedy of rude manners â€" bi, hetero, queer, extremely explicit â€" with candid instructions on how to use and dispose of body fluids, stem cells and dead mothers, expect subjects that make you queasy before prompting howls of laughter.

3. (2) Private Romeos: Set in a military academy, Alan Brown's all-male Romeo and Juliet commences as a classroom exercise, but soon the boys are living out the star-crossed lover roles, complete with luscious physical moments.

4. Gun Hill Road: This extraordinary queer youth melodrama features an MTF teen whose life is thrown into turmoil upon the prison release of a fiercely macho daddy. At 16, Michael/Vanessa (the awesome Harmony Santana) is using the girl's bathroom, starting female hormones and doing revealing poetry raps. Director Rashaad Ernesto Green has us worrying about the fate of a beautiful girl forever awaiting a tsunami of macho violence.

4. (2) Romeos: A German film that matches Gun Hill Road in its honest and raw portrayal of how hard it is for a young person to switch genders is Sabine Bernardi's frisky comedy about the travails of an FTM. There's poignancy in Lukas' late-night English Internet chats with comrades in transition, and growing doubts that he can earn his new body without losing his mind and old friends.

5. We Were Here: David Weissman and Bill Weber's doc is cradled in intimate storytelling: five people who by film's end feel like personal friends describe how AIDS challenged everything they knew about themselves and their adopted hometown. Illustrated by heartbreaking video/photo albums of men who perished in the earliest days of the plague (including this paper's AIDS obit issue), the film illustrates the human underpinnings for the "San Francisco AIDS model" that preserved a community until life-saving drug cocktails arrived.

6. Circumstance: Maryam Keshavarz plants her girl-loving heroines firmly in the belly of the beast: 7th-century-worshipping, 21st-century pop/tech-obsessed Tehran. How do young lesbians survive in a society lubricated by theology, bribes and arranged marriages? The wealthy Atafeh finds a willing playmate in orphan Shireen. The girls bond around carnal pleasures and underground dance clubs. Trouble comes knocking in the form of Atafeh's drug-addled brother Mehran: Reza Sixo Safai is deliciously smarmy, like a young John Cassavetes pimping Mia Farrow to the witches in Rosemary's Baby. Fear, loathing and paranoia are tempered by exuberant scenes of young queers dubbing a pirated version of Milk .

6. (2) A Separation: Asghar Farhadi demystifies family life in urban Iran with this searing, absorbing drama that pits a troubled middle-class family â€" wife and husband feuding over the claims of their young daughter's future vs. the care of his Alzheimer's-afflicted dad â€" against a barely surviving, nominally pious working-class couple.

7. Harry Potter gets my vote for the decade's best series. From directors Chris Columbus, Alfonso Cuaron, Mike Newell and the underrated David Yates, Steve Kloves' faithful screenplays, an army of visual magicians, plus a British cast for the ages, the Potter team invented subtexts from Dickensian to Orwellian, allowing each episode to encompass the age of terror.

7. (2) The Black Power Mix Tape 1967-1975: The black power movement (Stokely Carmichael, Bobby Seale and Angela Davis) gets a major makeover in these remarkable Swedish TV tapes. Trust the Swedes to capture the human side of a collection of American rebels consistently demonized on the American boob tube.

8. The Ides of March: Some of the best political writing since Gore Vidal's Kennedy clan-inspired The Best Man, another witty "liberal" knife-fight. In a series of cat-and-mouse games, Philip Seymour Hoffman and Paul Giamatti, as rival campaign managers and dueling Falstaffs, use their girth, wit and way with meaty, cynical dialogue to lure Ryan Gosling's Prince Hal into a trap before he can consolidate his power with George Clooney's king.

9. Into the Abyss: Werner Herzog's empathetic look at a Conroe, Texas drug-fueled murder spree offers a harrowing glimpse at the "closure" the death penalty gives crime survivors. From the deputy sheriff who guides Herzog around the crime scene to the former executioner whose nervous breakdown removed him from the loop, Herzog spares us little in this sorrowful take on Crime and Punishment in Rick Perry's kingdom.

9. (2) Where Soldiers Come From: It's the odd fate of Heather Courtney's band of brothers â€" from Michigan's Upper Peninsula tied by climate to Canada, by geography to Wisconsin but by politics to Michigan â€" to land in Afghanistan, a country whipsawed between Russia, Britain and America, "a wild, harsh, and broken land," as Robert Traver, author of Anatomy of a Murder, once described his beloved U.P. But as Traver notes, "Murders [like wars] must happen someplace."

11. Moneyball: This baseball screwball comedy, with its smart one-liners and workplace observations from writer Aaron Sorkin, is an almost-sequel to last year's darkly funny The Social Network. Old A's fans, teary at the prospect of losing their darlings to San Jose, will rejoice to the raspy tones of their late radio guy Bill King, with his signature, "Holy Toledo!"

11. (2) Margin Call: Unlike Charles Ferguson's excoriating financial meltdown doc Inside Job, Margin Call subversively humanizes its Wall Street pirates, allowing us to feel their pain, and momentarily value it above our own.

12. (2) Bill Cunningham New York: Richard Press' spectacular bout of people-watching introduces us to an 80-something artist who takes death-defying chances to get his photos. Watch him cut off a Yellow cab on his Schwinn, an old-fashioned patrician celebrating individuals in traffic-stopping costumes.