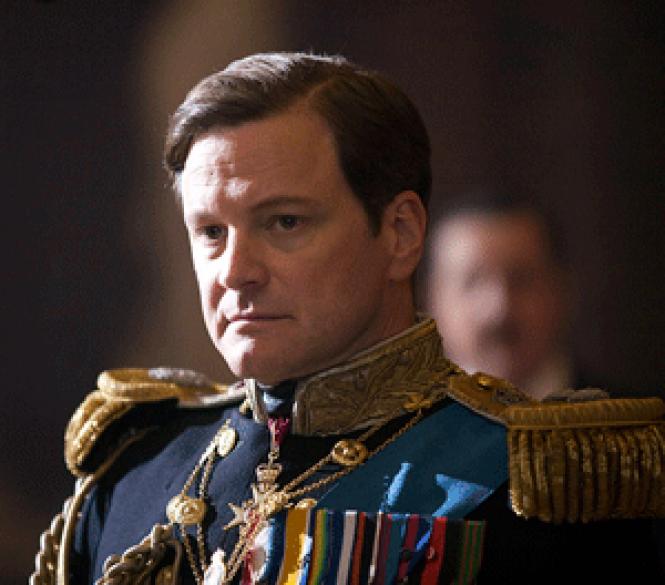 Colin Firth in The King's Speech
.

It's a stretch to label The King's Speech a prequel to The Queen, Stephen Frears and Peter Morgan's humanizing portrait of the royals under media siege for their implied snub of Diana. But in subtle ways, director Tom Hooper's moving account of how a sickly boy kicks his fear of daddy, King George V, and becomes a wartime monarch the British people still fondly recall, as well as father to the current Queen, allows us to see these superprivileged stand-ins for God and Nation as frail, resilient reeds before the gathering storm of WWII.

Penned by David Seidel, the film puts the royals in crisis mode, and shows how an agonizingly shy Duke of York – more observational, non-method acting from Colin Firth, last year's peerless A Single Man – overcomes a paralyzing stammer to address his subjects across the Empire via BBC shortwave radio. All tubes and whirling motors, the BBC's transmitters rumble like the engine room of a great ship, making even the glibbest of speakers feel unworthy.

The story opens in 1925, when the then-Duke of York was a family embarrassment with his horrifying inability to get through perfunctory remarks at a royal industrial fair. We see how an inability to talk on "the wireless" leaves this future Emperor feeling more than symbolically naked. The Duke confronts his inadequacies by viewing newsreel footage of Hitler's guttural attacks on everything the Duke represents. His young daughter, Elizabeth, asks innocently, "What's he saying?" The reply: "I don't know, but he seems to be saying it rather well." The movie shows that this buttoned-up man could only relax during story time for Elizabeth and sister Margaret.

We see why the dying George V feared leaving the throne to a human bowl of Jello. "Who'll stand between Herr Hitler – the jackboots – and Marshal Stalin – the proletarian oblivion: you?" It's a tribute to Firth and Rush that we forget other matters of state during the movie's drastic compression of time and history. The film provides short shrift to the British establishment's fears that Bertie's brother, Edward VIII, was unfit for the throne as much for his Nazi sympathies as for his flamboyant mistress, the twice-divorced Wallace Simpson, who hosts a weekend castle soiree like a bootlegger's wife.

The King's Speech gets a huge boost from the odd-couple chemistry of the future monarch and his nervy therapist, Oscar-winning Geoffrey Rush. Upending centuries of royal prerogatives, Rush's Lionel Logue insists on seeing the future king in his home office – "My game, my turf, my rules" – where his teenage boys are treated more like princes than the Duke, whom he calls "Bertie."

The movie plays out in Logue's drab quarters, where the third-rate Shakespearean actor cajoles, flatters and bullies his prickly pupil. The teacher engages in a series of pedagogical pranks that in an earlier age would have earned him lodging in the Tower of London. Firth does the Duke's stuttering transformation as if he were an especially slow schoolboy whose behavior has to be rewarded by petty wagers and playtime with Logue's sons' model airplane kits. Firth astutely plays the Duke as a human clenched fist. The film's heartbreaking epiphany derives much of its thump from the actor's unwillingness to yield too glibly to our wishes that he loosen up faster than Bertie did.

Missing her Harry Potter fright-wig, Helena Bonham Carter steals a slice of the movie as a no-nonsense royal wife – the future Queen Mum, who lived to be 101 – who stumbles on Logue's Hobbit-like quarters as if she had a yen for a downscale fish-and-chips shop.

This Oscar-bait (almost certainly for Firth) tour de force should leave you laughing and perhaps shedding a tear for a very human monarch. If The King's Speech has done its job, you'll feel a lump in the throat when a trembling Duke hears the dreaded words, "You're live in two minutes, your Royal Highness."