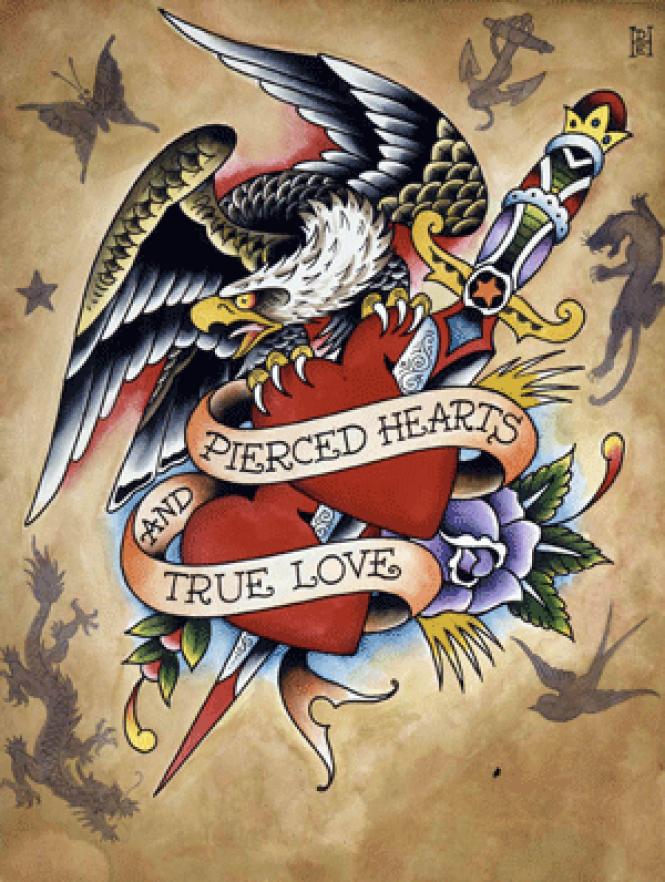 Ed Hardy Tattoo the World Now I get why I never wanted to be tattooed. It hurts, and you're forever branded as hanging with the wrong crowd. Emiko Omori's visually eye-opening baptism into the sociology and visual poetics of this ancient art dispels some hoary myths, and traces the line between queer and straight tattoo styles.

Born and raised in the heart of the beast, 1940s-50s Orange County, Ed Hardy flirted from childhood with forbidden artistic desires. Constructing fake tattoos on his grade-school classmates led the thoroughly white-bread and hetero Hardy to the life of a teenager surfer, and then, by age 18 (when he could obtain a state license), to an apprenticeship with queer pioneer Samuel Stewart (a.k.a. Phil Sparrow) and eventually to the establishment of his own private salon. Omori explores how tattooing became, if not entirely respectable, an artistic calling with serious converts, from West Coast Bohemians to free-spirited Hawaiians to Japanese master craftsmen. Exploring the wild days when hordes of sailors on shore leave would get tattooed in marathon sessions, Ed Hardy illustrates how far this art has evolved, while never entirely shedding its "trashy" reputation, owing, Hardy believes, to the thought-police of American Christianity. (Roxie, 11/6)

Four Lions The attempt by an Anglo/Pakistani "band of brothers" to direct a jihad against a costumed marathon race in a provincial UK city is the basis for this clever if at times farfetched social satire.

Four British-born lads from Pakistani backgrounds are engaged in a furious and often wacky debate with a white Islamic convert about the best way to launch their own domestic jihad against their mostly unsuspecting countrymen. Barry, the volatile nihilist, is gloriously nutty in his rants about "punching yourself in the face."

For an American audience, one obstacle to this film is digesting working-class British slang to translate the verbal gags; another is distinguishing the players without a scorecard. Each of the four Anglo/Pakistani characters represents a particular place on the assimilation/outcast continuum, with the middle-class, comparatively well-educated Omar (Riz Ahmed) being the most likely focus of identification. The other fellows, especially Nigel Lindsay's pugnacious Barry, are like Monty Python out-takes. The proliferation of funny animal gags – especially the nifty exploding sheep – may cause some to doubt the sincerity of the picture's Humane Society disclaimer.

The film's funniest moments are also its cruelest. A police sniper executes a suspected "terrorist" running the marathon in an animal costume, whereupon a hilarious police-radio debate ensues as to just where in the costumed animal kingdom to place this poor fellow.

Chris Morris and his writing team (Jesse Armstrong and Sam Bain) draw on a rich tradition of linguistically sharp social satire (I'm All Right, Jack) and dark Cold War-era comedies (Dr. Strangelove, The Manchurian Candidate ) to defuse some our worst fears. They examine the possibility that the biggest threat to our security may not be religious extremism, but rather the ongoing angst of being a man on today's 24/7 global stage. (Brava Theatre, 11/5; opens 11/12 at Landmark's Lumiere Theatre in SF, and the Shattuck in Berkeley.)

Having cultivated a rabid British-TV following collaborating with the likes of Steve Coogan and In the Loop's Armando Iannucci, the hirsute and articulate Chris Morris sat down in a downtown office-tower to explain how he managed to avoid the twin perils of political correctness and Muslim-bashing in Four Lions, his first theatrical feature.

David Lamble: A gag that should appeal to some of our readers is one where the bullying white "jihadist," Barry, gets one of the gang to piss in his own mouth. This wacky allusion to "water sports" illustrates the almost absurdly homo-erotic undercurrent among these guys. They're not queer, but there's a thin line between their larking about and gay S/M.

Chris Morris: Jackass has a very similar kind of dynamic. A guy I spoke to, who works in counterterrorism, fought in the Falklands War in the early 80s. And when he came back, he described how all his friends, whenever they saw him with the guys that he had fought with, thought that he had gone gay, because of the strength of the bond that you forge with a band of brothers. It's in the nature of the male bond, it's an infinitely nuanced sliding scale. So, okay, the joke in the film: Barry makes Waj piss in his own mouth, but is Barry gay? No. Could it be a power play? We're not saying yes or no. It could have just been a deeply humiliating prank. After all, that's probably a technique that's being used against these guys somewhere in the world right now.

There's another implied joke about these guys: they're trying to relate to their Pakistani/Muslim background, but in reality they've been brought up to be almost absurdly British. It seems they're trapped in a horrible state of cultural confusion.

But it could be great. I met a lot of Pakistani guys and gals who have traveled widely and said, "I'm going to live in Britain, Britain is my country, it's the best place to be," because they had seen the reality [in Pakistan]. Imagine, your family was displaced 60 years ago [after the partition of India between Muslim and Hindu], and you grew up with a dual sense of who you are.

The way you stage these Monty Python-like acts of martyrdom, with exploding sheep and bomb-rigged crows, is on the one hand funny, but people actually die, which may cause some American viewers to wonder if it's okay to laugh.

There are rules, which don't bear any reference to fairness as such: in a film, you can kill somebody as long as they're the right person to kill; you can't kill other people without taking the consequences for it. And some deaths in the film are funnier than others. In terms of the dynamics of them, well, there was a guy two weeks ago in Indonesia who was delivering a bomb to a target down the road. He was riding a bicycle, whilst wearing a bomb-belt. He swerved to avoid a hole in the road, he hit a lamppost, he blew up. Now, as long as you weren't his mother and were the right distance away from that, it would be pretty funny. Remember, there's a lot of violence in Buster Keaton. The climatic scene in The General is basically a massacre.