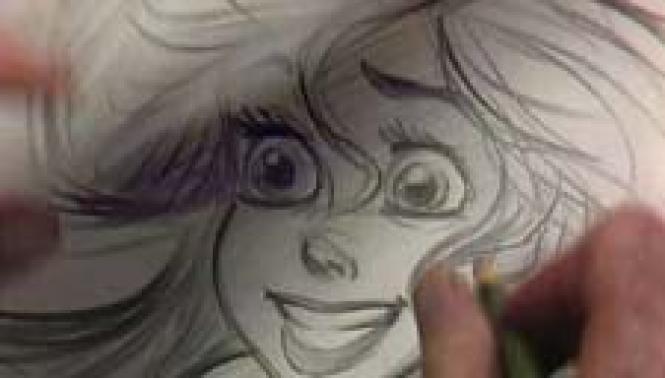 Towards the climax of Waking Sleeping Beauty, Don Hahn and Peter Schneider's candid, informative and unexpectedly moving account of the rise and fall and rise again of a great American institution some of us grew up regarding as "the Magic Kingdom," a sublimely talented artist dies. Howard Ashman was only 40 when he succumbed to complications from AIDS, and as Hahn explains, the former Broadway composer had by that time become a highly valued member of a very elite group who were about to bring Walt Disney Studios its greatest triumph since the death of "Uncle Walt." In WSB, Hahn describes how the exhausting work behind Beauty and the Beast, the first animation feature to notch a best picture Oscar nomination, claimed Ashman's final creative juices just as a rough work-in-progress print wowed an early preview audience.

"We were high on it, and then we had to rush downtown and come into the cold shock of Howard dying in a hospital room. A nurse pulled back the sheet. Howard weighed 80 lbs., and was wearing his Beauty and the Beast T-shirt."

One of the pleasures of the film is catching a unique glimpse into the always-messy creative process, especially how it plays out in the bowels of a multi-billion-dollar corporation where the voices, faces and reputations belong to the already famous, the soon-to-be famous and the truly anonymous. The picture opens on a grainy, unauthorized 1980 home-video tour of the Disney animation studio, where we see a generation of young animators who had every reason to be worried. There's future Toy Story Pixar genius John Lasseter about to be fired for being prematurely right about the coming digital animation revolution; there's a glimpse of a young Tim Burton caught in the headlights, just before he scampers off the Disney lot to begin playing with Johnny Depp.

Waking Sleeping Beauty spans a tumultuous decade (1984-94) when a son-in-law (Ron Miller) is fired, a little-regarded nephew displays some backbone and some sharp elbows (Roy E. Disney), young Turks are brought in to steady the ship (Michael Eisner, Jeffrey Katzenberg and Frank Wells), and a young boss with a high voice and slightly effeminate manner (Peter Schneider) comes in to herd the animator cats, create a new era of cartoon masterworks, and eventually co-helm this movie (with screenwriter Peter Pacheco).

The filmmakers make shrewd and offbeat use of their backstage pass to prove the wisdom of some ancient show business truths: nobody knows anything, you're only as good as your most recent numbers, and there's never enough credit to go around to assuage the world's prickliest temperaments and hungriest egos. One of the hardest truths that leads to the biggest clash is that the animation process is the most ego-deflating because everybody, no matter how talented, ends up being a role player, a cog in the process. One zany moment shows superstar Robin Williams in a voice studio launching into the standup version of speaking in tongues: "I don't know what I'm saying, just go with me!"

Several years back, hanging with LA friends for whom the Magic Kingdom might as well be Vatican City, I was browsing a Disney bookshop where a series of passionate insiders had depicted Michael Eisner as if he were George W. By contrast, here Eisner emerges as a smart corporate front-man who can fill Walt's shoes goofing around on-air with a dude in a Mickey Mouse costume while fielding media questions about why Disney continues to make expensive animated movies. "We have to, it's our legacy."

For all the big-stakes boardroom meltdowns, the great joy of this film comes from the tantalizing glimpses of genius at work. The late Howard Ashman fills the role, at times reminding studio veterans of the seamless way Walt would nail a story point for his animators, or know just where a script had gone astray. Particularly moving are Ashman's coaching a female vocalist's attempts to bring just the right inflection to a plot-important song; Ashman's inspired notion that The Little Mermaid 's Sebastian the Crab should warble "Under the Sea" in a Jamaican dialect; and the little-boy enthusiasm behind Ashman's exclamation that there was nothing in the world that brought him quite so much pleasure as a Disney animated fairy tale.

The Heretics "I may have breasts and a cunt, but that doesn't mean I can't do anything in the world."

This saucy comment from Su Friedrich, one of my favorite road-movie directors, opens Joan Braderman's engaging portrait of a generation of feminists who launched what is generally regarded as the Second Wave of the Women's Movement. "The Heretics" specifically refers to a generation that found sisterhood along with cheap rent in Lower Manhattan during the feisty early 70s, when, as one survivor notes, anything seemed possible in the world of progressive women. The heretics of this film also comprise the Heresies collective, which between 1977-92 put out 27 issues of Heresies, a trailblazing feminist journal on art and politics.

Braderman notes the satisfaction of being able to track down the now far-flung former Heresies members with a talented young female film crew. Most have prospered and stuck to their art, writing or work as political organizers. The camera reveals the extra pounds and the increasingly daunting challenge posed by extra flights of stairs.

One youngish Heresies veteran fondly recalls the consciousness-raising groups where women were allowed an uninterrupted 15 minutes to tell their individual stories. "I think we need to go back to the CR groups," she sighs. "They were the fuel of the movement."

The Heretics is the closing night film of the SF Women's Film Festival, Sun., April 11, 7:15 p.m. at the Roxie. Ticket price includes a pre-film reception at the Women's Building. Info: www.sfwff.com.