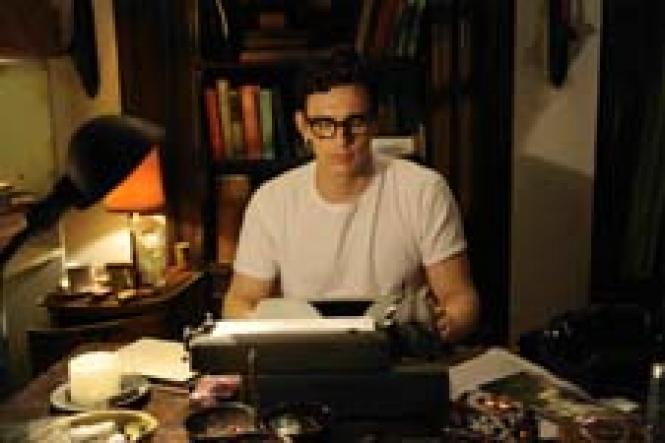 This year the Sundance Film Festival has a new programmer, John Cooper, and a fresh vow of cinema relevance. We'll see about that, but one thing's for sure: the state of Sundance, artistically and financially, has a hell of a lot to do with the treats that will sustain art-house maniacs. What follows are my hunches as to what may make it out of Park City and onto screens from 40 feet to four inches.

Howl: Homeboys Rob Epstein and Jeffrey Friedman, still reaping hosannas for one of the all-time-great queer docs, The Times of Harvey Milk, take some artistic risks and liberties trying to embed us inside the mind of a mad homo poet, the 29-year-old Allen Ginsberg. According to biographer Barry Miles, in August, 1955, stung by a recent dressing-down by an old mentor, Ginsberg vowed to blast through whatever was blocking his real voice.

"I thought I wouldn't write a poem but just write what I wanted to without fear, let my imagination go, open secrecy, and scribble magic lines from my real mind â€" sum up my life â€" something I wouldn't be able to show anybody, writ for my own soul's ear and a few other golden ears."

"I saw the best minds of my generation/ Generation destroyed by madness/ Starving, mystical, naked/ Who dragged themselves thru the angry streets at/ dawn looking for a Negro fixï¿½"

Howl would go on to be one of the first hot sellers for the fledgling City Lights Press, provoke outraged fulminations from mad-dog conservative Norman Podhoretz for "its glorification of madness, drugs and homosexuality," prompt the SFPD to cite City Light's owner Lawrence Ferlinghetti and throw one of his clerks into the city's drunk tank, "which smelled of piss," and lead to an historic Federal censorship trial.

Epstein and Friedman utilize fact, fiction and animation tropes to explain how a seven-page poem would launch a counterculture, or what some have labeled an ongoing culture war.

Undertow: Writer/director Javier Fuentes-Leon concocts a quixotic ghost story to demonstrate the anguish of a married Peruvian fisherman trapped between his passion for a male lover and his tiny seaside community's hatred of anything that rocks their boats â€" with Latin hotties Cristian Mercado and Manolo Cardona.

A Prophet: French director Jacques Audiard, whose love of the Parisian underworld has sparked such filthy, character-driven thrillers as Read My Lips and The Beat My Heart Skipped, here outdoes himself with a prison-based coming-of-age tale that is also a magic realism-charged ghost story.

When we first lay eyes on him, 19-year-old Malik bears the scars of the street. Now tossed into a human inferno ruled by rival and fiercely antagonistic Arab and Corsican gangs, Malik is ordered to murder another inmate, an older informant who has the hots for him, as the price for being "protected" by the prison's Corsican don, the white-haired and ferociously ornery Cesar (a riveting Niels Arestrup). As wrenching as the murder scene is â€" a naive and frightened kid garroting a potential mentor with a razor â€" what follows is astonishing, as the murdered man stays with Malik, and in a very peculiar way, instructs his transformation into a master criminal who paradoxically may also be a comparatively decent human being. (Opens March 5 in Bay Area theatres.)

Jean-Michel Basquiat: The Radiant Child : If you thought Julian Schnabel's feature debut undressing of a troubled man-child painter who briefly set the New York art world ablaze before succumbing to a heroin overdose was all you needed to hear about Jean-Michel Basquiat, doc-maker Tamra Davis says hold on a minute. Using Basquiat's words and his art, labeled bebop-influenced neo-expressionism or sometimes gutter punk, Davis means to resurrect the relevance of a black artist pioneer whom she considered a friend.

Blue Valentine: If you've been missing a Ryan Gosling (The Slaughter Rule, Fracture) fix these past three years, rejoice, the Ontario bombshell is back, this time pitted against Brokeback Mountain's Michelle Williams in a nuanced chamber piece that attempts to deconstruct a once-loving marriage. Director Derek Cianfrance (with screenwriters Cami Delavigne and Joey Curtis) promises a wild ride with two of the most brilliant film artists of their generation.

Hesher: On the subject of brilliance, the early buzz from Park City has it that Joseph Gordon-Levitt absolutely steals the show as a pranky, rude, anarchical antichrist figure who comes to haunt and bedevil a family reeling from the loss of a young mother. Writer/director Spencer Susser (with co-writers David Michod and Brian Charles Frank) gives Joe a Halloween-scary fright-wig, and sets him off to the frequently funny and scary job of helping a 13-year-old kid (Devin Brochu) forget mom.

Joan Rivers: A Piece of Work: If you think life will never be the same now that Conan O'Brien has slipped off the late-night TV coil, Ricki Stern and Annie Sundberg give us a too-close-for-comfort look at female comedy's original comeback kid. Joan Rivers was banished from late-night when Johnny Carson got pissed at her audacity for accepting a Fox show without seeking his permission. The filmmakers show what it's like for a female funny lady, whose private life is forever shadowed by the suicide of her beloved husband, to push on now that the odometer reads 75, and practically everyone thinks she's yesterday's news.

James Gandolfini and Kristen Stewart in Welcome to the Rileys.

Welcome to the Rileys: Remember those glorious interludes during the long reign of The Sopranos when David Chase would suddenly lose gangland Tony and insert the emotionally supple James Gandolfini into what amounted to a stand-alone art film, sometimes a dollop of the surreal such as Tony's coma dream-life? Director Jake Scott and writer Ken Hixon cast Gandolfini as a distressed businessman who finds an odd link to a young New Orleans woman (Kristen Stewart).

Teenage Paparazzo/Smash His Camera: Sundance doubles down on our taste for humbling pretty people having their 15 minutes. When 13-year-old paparazzo Austin notches a shot of Entourage pretty-boy Adrian Grenier, he doesn't bargain for the actor refusing to leave the frame and providing an intense tutorial in celebrity watching. Smash profiles a still-active camera hawk who earned a right to the jaw from Marlon Brando and a lawsuit from Jackie Kennedy.

All That I Love: Jacek Borcuch's Polish sleeper finds four provincial teens swept away by their dreams to be punk rockers just as their country is rocked by the grass-roots Solidarity movement.

Restrepo: Sebastian Junger and Tim Hetherington create the doc equivalent of this year's gripping war movie The Hurt Locker, as they embed us in the boredom, sheer chaotic terror and macho camaraderie of soldiers from the Second Platoon trapped in a vital valley in Afghanistan.

Waiting for Superman/Daddy Longlegs: Two films, two slants on the perils of childhood: the makers of An Inconvenient Truth track dreams created and crushed by America's capricious school lottery in Superman. Daddy Longlegs follows an eccentric weekend dad's capricious use of his "quality time."