Worshipping in the Church of Almodovar 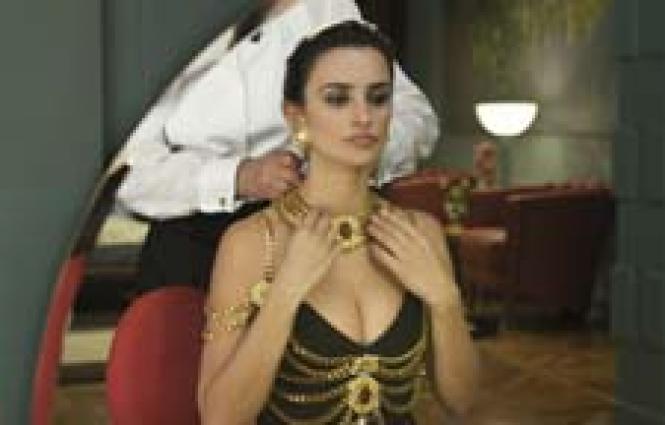 In Broken Embraces, his latest meditation on how a love of movies can shape, enrich and at times even redeem our lives, Spanish master Pedro Almodovar first shows us a seemingly broken man, a blind man who begins the day by buying a newspaper. Harry Caine (even his cinema-charged name has an intriguing back-story) saddles up to a beautiful young woman in the street who has just popped out of a nearby "modeling" agency. Drinking in her aroma, Harry persuades the young woman to return to his flat on the pretext that she read to him from the newspaper. The reading quickly dissolves into what for Harry is a delicious romp, with clothes flying all over the apartment. No sooner does the couple climax than they are interrupted by the appearance (it feels like an invasion) of Harry's agent, Judit (Blanca Portillo), who is visibly displeased by the scene. As the young lady is exiting, Judit reads Harry the riot act.

"You can't bring to your house a person who helps you across the street. One of these days, something awful will happen to you!"

"Everything that's had to happen to me has. Now all that's left is for me to enjoy life."

The scene brilliantly encapsulates Harry's present predicament, and suggests that Judit and her lovely adult gay son Diego (Tamar Novas) are his real family. The balance of the film is devoted to explicating just how complicated and emotionally punishing those ties have become. Harry is a sad ghost of an earlier self, a robust, talented writer/director who used to call himself Mateo Blanco.

It's amazing that I've been able to get this far without mentioning the absolute core of Broken Embraces, an astonishing, luminous performance by Penelope Cruz as Harry's dead lover, his cinematic muse, a woman whose tragic fate the film's labyrinthine, self-referential structure is devoted to unraveling.

The one news story that Harry's gorgeous trick did convey is the death of an old enemy: Ernesto Martel, Sr. (Jose Luis Gomez). The news of the demise of this wealthy and corrupt land developer obviously hits Harry and Judit very hard, but, as we will see, for rather different reasons. One of the most daring narrative devices Almodovar uses is employing two younger gay men as the instruments for revealing the whole horrible and fascinating back story, where Ernesto, Sr. wreaks his terrible revenge on Harry, destroying both his woman and his art.

As with his recent masterpieces All About My Mother, Volver and Bad Education, Almodovar conjures up every trick in plotting and emotional manipulation he has gleaned from the masters of Noir â€" Otto Preminger's Fallen Angel is a particular inspiration here â€" and from the ever-present Hitchcock â€" Vertigo and Psycho, in this case â€" to keep us reeling with the absurdist predicaments that dog these characters. A young woman sells herself to a rich industrialist to save her dying father. A gay boy desperately tries to please his abusive father by arranging to shadow his dad's archrival with a movie camera (its tripod conjures an image of the homicidal instrument from Michael Powell's Peeping Tom). Another gay man, more comfortable with himself, almost succumbs to an accidental drug overdose, which sets him up to be an audience for a horrible story his overprotective mother has been shielding him from. And we experience close-up why filmmakers should refrain from mixing their libidos with their art.

Cruz is magnificent â€" like Gael Garcia Bernal in Bad Education, essentially playing three roles â€" especially since she is never seen in the present-tense framing story. Like the best 1940s Noir heroines, Cruz's raw authenticity and believability allow us to forgive her any transgression. In the process, perhaps we forgive ourselves our own sad, wanton, feckless early lives: the very foolish acts that led us to the Church of Almodovar in the first place.

Tamar Novas as Diego â€" the latest in a long line of Almodovar empathetic pretty boys â€" is a perfect stand-in for our kinder, more generous impulses. A subtle visual gag has the blind Harry accidentally bursting in on a naked Diego, one of Almodovar's few indulgences to his male-identified gay fans.

Perhaps the only flaw in casting comes with Lluis Homar's challenging dual job to be both the wounded present-day Harry and the younger, ambitious and reckless Mateo. Homar served Almodovar well in Bad Education as the doggedly imprudent "Fred MacMurray" to Gael's ruthless "Barbara Stanwyck" murderess, but here he seems a little too male frumpy, too insubstantial a life force to be the cause of so much complicated mayhem and regret.

Broken Embraces' virtues are hard to appreciate in a single viewing. One useful supplement is Almodovar's screenplay, translated into English, available on www.ropeofsilicon.com.