Isherwood in the new world 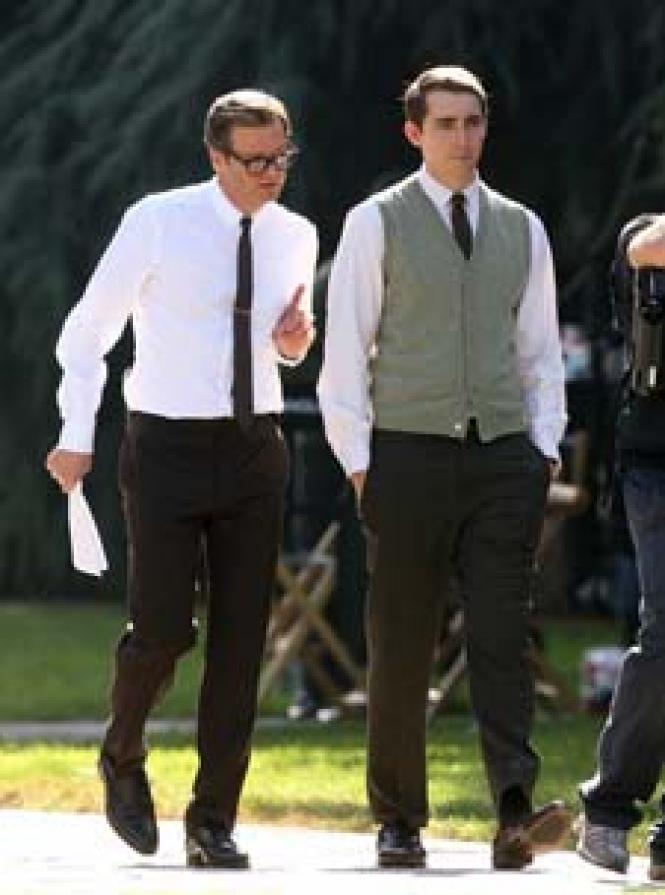 Colin Firth and Matthew Goode on the set of A Single
Man. Photo: Photo Agency

In director Tom Ford's exhilarating take on Christopher Isherwood's path-breaking 1964 novel A Single Man (based on a screenplay co-written with David Scearce), a middle-age Englishman, George (Colin Firth), wakes up in his sunny, stylish LA home heartsick over the recent and still incomprehensible death of his young lover, Jim (Matthew Goode). Despite discarding significant portions of Isherwood's George, Ford deftly maintains the novel's core conceit that taking us through a day in George's life will allow us to see the whole of that life in what might be its last day.

Ford's Spartan, dialogue-free first act finds George struggling for consciousness, hit by a wave of longing and lust as he re-imagines Jim's broken body at the snow-covered Colorado accident scene. He's resigned to the undignified rituals of readying his decaying body for its command public performances. There's a funny moment when George, perched on the toilet, is summoned to the phone (this October 1962 world is sans cell phones or answering machines) and forced to confront his needy best friend Charlotte or "Charley" (Julianne Moore), begging him to come over that night for dinner and another of their boozy, nostalgia-filled evenings. He fears she will once again stick her tongue in his mouth with the absurd hope that this will somehow spark something between them that neither will regret.

Leaving his house, George spies his "breeder" neighbors and their "issue" – small children who are very definitely "the enemy." This is most assuredly not the world of gay marriage and its concomitant surrogate child-bearing rituals.

George's sole purpose in a Jimless world is to serve as a large, almost comically disembodied talking head who can remember his old lectures and repeat them almost by rote. He can still snap back into the present moment when summoned to do so by a sexy male student, Kenny (Nicholas Hoult). Kenny's role, in both film and book, is to reawaken a desire in George for a future without Jim, with a half-teasing sense of life's sensual and philosophical possibilities.

Like last year's Revolutionary Road and this year's An Education, Pirate Radio, Taking Woodstock and A Serious Man, Ford's A Single Man boldly re-invents the moment when the conformist, corseted 1950s turned into the dangerously free 60s. Ford constantly reminds us that George, stuck in his ways and suicidal though he may be, is an incipient revolutionary, too, a pilgrim desperate for a rebirthing.

Ford's calculated gamble, that seriously re-conceiving what for some is a sacred text will gain for his movie a potentially huge wider audience, pays off, brilliantly. Yes, it was hard for me to watch Colin Firth's George pack that revolver into his attache case, but it's there and it works better for the screen than Isherwood's hypothetical George-dying coda might have.

I did feel the loss of the book's George, who, when ogling nearly naked boys playing tennis, imagines them as libidinous gladiators. Also missed: the book's "terrorist George" driving to school along Southland freeways, imagining himself as the ultimate avenger for hetero crimes.

The cast is sublime. Firth has waited a lifetime to evoke this deliciously understated agony, as good as he's ever been, including his handsome young thing in Another Country and his unforgettable Mr. Darcy in Pride and Prejudice. It's especially miraculous considering that in some ways he's still a decade too young for the part, a character Isherwood originally conceived as a kind of doppelganger for his own aging self, wondering how he might cope if Don Bachardy were to leave him.

Julianne Moore will most assuredly get Oscar consideration for her gloriously needy Charlie. It's hard not to embrace a character whose methods in real life might send us racing for the hills.

Matthew Goode is delectable in his relatively brief turn as the dead Jim. The intoxicatingly romantic scene of the lovers sharing a night together on the couch, each absorbed in his respective book, is as fulfilling a moment of same-sex affection and love as any in Brokeback Mountain .

The as-yet little-known Nicholas Hoult, as the wildly flirtatious Kenny, steals his scenes in and out of his clothes, with the perfect take on an archetypal curious youth who isn't entirely certain of just what he wants from his silly old in-his-cups professor. Those who recall Hoult as the precocious 12-year-old who awakens fatherly instincts in Hugh Grant (2002's About a Boy) will be shocked by the smart hunk our Nick has turned into.

It's not every day we get to appreciate a richly imagined queer character as not only important in his own right, but a fitting representative for all of humanity. Drink it in, at theatres everywhere.