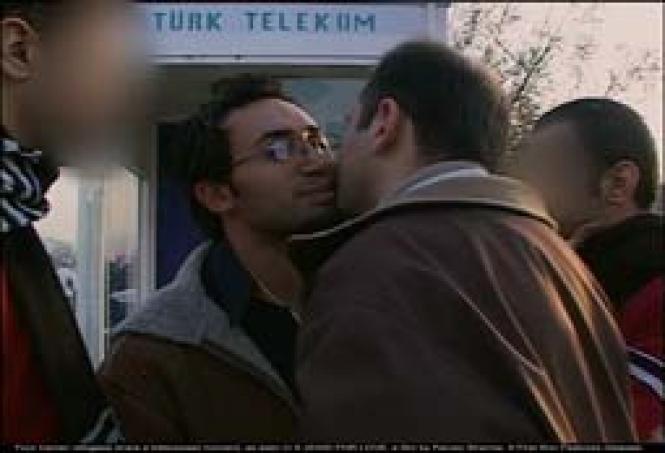 The pioneering, heartfelt new film A Jihad for Love opens with a very brave man being raked over the coals, so to speak, on South African radio. In the comparatively liberal precincts of Johannesburg, Muhsin Hendricks gets to speak truth to power, gets to attack the logic behind a huge taboo in the modern Muslim world.

"You said, over national radio, 'I am Muslim, I'm an Imam, and I'm gay.' Did it ever occur to you that, 'Listen, I'm going to be hurting the feelings of thousands of Muslims?'"

"Yes, I fully understand that, but we also need to understand that the issue of homosexuality within the Muslim community is real. These are the lives of people all over the world. On a daily basis, I deal with young Muslims who are struggling with reconciling their Islam with their sexuality. So instead of them leaving Islam or committing suicide, what I basically do is to tell them to accept Islam for the goodness it comes with, and reconcile it with their sexuality, because their sexuality is not something that's going to disappear."

The response to Imam Hendricks' homily that day was a stream of vituperative calls, each ending in a death threat. While Hendricks does his missionary work under the symbolic protection of a South African constitution that guarantees the rights of gay people, elsewhere things are distinctly more problematic, as Muslim gay filmmaker Parvez Sharma demonstrates with his candid view inside the lives of queer Muslims in a dozen countries. From the brave activist father who quizzes his daughters about whether they would come to his rescue if he were to be executed for being queer, to a group of Iranian exiles seeking asylum and an uncertain future in the West, to a lesbian couple who pray that Islamic sacred texts will give them courage to avoid further "wicked" carnal acts, to the fiery condemnation of all queer acts by a bearded cleric, this film will both inspire and anger. Sharma and his Jewish collaborator Sandi DuBowski (creator of Trembling Before G-d, a pioneering look at homosexuality among Orthodox lesbians and gays) emphasize the awesome divide between out Muslims and a largely intolerant, politically-inflamed Islamic world community.

Perhaps no film I've viewed contains more examples of individuals whose faces were digitally erased to avoid possibly lethal exposure for themselves or relatives. This is an insider's look at a previously closed world, and many Western viewers may be frustrated at some of the more opaque points of view and bitterly held beliefs.

The film's poster boy is a slender young Egyptian who fled his homeland after being brutalized in the prison system of the US-backed strongman Hosni Mubarak. The boyish 29-year-old makes his way in a French culture that is notoriously Arab-phobic, scratching out a tiny living as a belly dancer/rent boy.

Sharma considers meeting Mazen as the beginning of the journey that would become Jihad for Love. "He had escaped Egypt, he had been tortured and raped in an Egyptian prison. As with each of the subjects in this film, I had to form a very deep personal bond. I had to be his shoulder to cry on for several years before he came to that moment in the film where he is ready to face the camera, which happened naturally. When I started filming, he was too afraid to show his face. I felt it was important for me to map that trajectory, from invisibility into visibility, and his compelling reasons for coming out in the film.

"I have held him for many nights, we have slept in the same bed, and he has cried all night. Any documentary filmmaker that tells you they don't have that personal involvement is lying. I realize now, that if I was a white guy with blonde hair and blue eyes and non-Muslim, I would not have been able to make this film. Being a Muslim filmmaker, understanding the religion, and operating with respect for my own religion, was very important in winning that battle of trust with each person.

David Lamble: Mazen is slight, effeminate, gentle and soft; he does belly-dancing. How did he pick up these traits in a society that appears to frown on the outward display of homosexuality?

Parvez Sharma: I'm a little bit tired of what I call bleeding-heart liberals in America [who assume] that identity constructs around gayness operate in the same way in Islamic society. They do not! The terminologies that we are so accustomed to here, like gay, lesbian, bisexual, transgender, queer, intersex, are Greek to most people in other countries, they would not understand many of these identity constructs. The young men in India would not, who are happily dancing and cross-dressing to a Bollywood song in the film.

In our arrogance in assuming that we have the copyright on gay liberation, we end up assuming that Islamic societies or more traditional societies do not have that. But throughout Islamic history, there is a long history of homosexuality not just being tolerated, but also openly celebrated. There's a lot in Islamic history, poetry, literature, and art that talks about the form of the young man held up as the perfect form. When you get to the Koran, in addition to the 70 virgins that are promised to you, there are entire passages that talk about young men bearing wine, with beautiful eyes that will come and meet you in heaven.