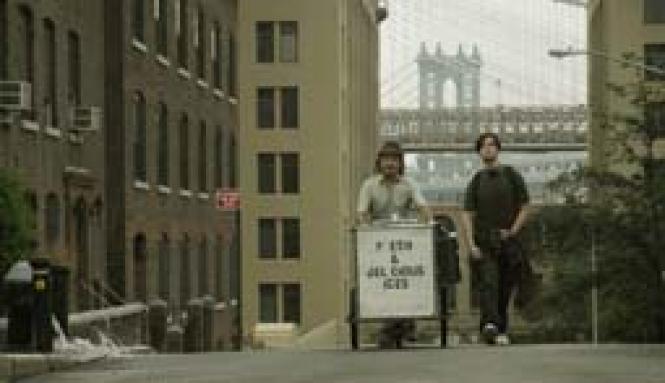 Scene from The Wackness. Photo: SFIFF

The Wackness Jonathan Levine's Sundance hit comedy bonds a drug-dealing teen (Mean Creek's Josh Peck) with an eccentric psychiatrist (Sir Ben Kingsley) in a daffy search through Rudyland, the fun-loathing police state established by the twice-divorced, drag-loving Gotham mayor. Giuliani came into office promising a Carrie Nation-style crackdown on quality-of-life crimes: graffiti-writing, public urination, loud radios, drug-dealing and unlicensed pushcart vendors. Between them, Luke Shapiro and the shaggy-haired Dr. Squires are guilty of every possible perfidy. Peck sheds the pounds and self-hating persona of his Mean Creek bully, in the process creating a kid who trades a love of hip-hop for impressive layers of vulnerability. Olivia Thirby (Snow Angels) is subtly effective as the girl who must break Luke's heart, and Sir Ben creates still another screen rascal in his ongoing bid to shed the glorious stench of Gandhi .

La Zona Rodrigo Pla uses a staple of tabloid news, a brutal home-invasion robbery by a band of feckless teens, to concoct a gripping moral thriller that pits the fearful residents of a wealthy gated community against an armed slum kid. The film begins on a hyperrealistic note: a curly-haired teen, Alejandro (the emotionally supple Daniel Tovar), is driving through a bucolic-appearing suburban paradise. It's a scene reminiscent of the opening frames of Blue Velvet, and like David Lynch's intrepid truth-seeker Jeffrey, Alejandro will find a serpent in the garden.

Having constructed a techno fortress against crooked cops and the criminal proclivities of their neighbors, the residents decide to hunt down the surviving robber, a frightened 10-year-old. At first, Alejandro tries to impress his Pop by capturing the kid with a posse of his classmates. Gradually, the conscience-stricken schoolboy sees through layers of adult hypocrisy and attempts to foil mob justice.

La Zona comments on the siege mentality of some affluent Latin Americans, a culture of corruption that bars respect for law as well as the irony of a people-exporting country with its own tortured internal borders. The film's taut, grotesque climax is deeply unsettling. (Clay, 5/3; Kabuki, 5/5, 7)

The Woven Stories of the Other Sherad Anthony Sanchez creates a slowly paced, imaginative meditation on life in the politically turbulent Southern Philippines, including a soldier with a crush on a comrade. Carefully composed shots of an ancient people stumbling around a primordial rain forest make up for a lack of a driving narrative. A politically correct female Marxist commander gets on everybody nerves, and we observe the games males and females employ to annoy each other in all societies. (Kabuki, 5/1, 3)

Vasemil Any lingering notions of Israel as some kind of utopian paradise are exploded in Mushon Salmona's gritty drama about three confused soccer-loving teens. David Teplitzky's sullen blonde Russian Dima is an angry truant who supports his immigrant family dealing party drugs. Shlomi (sultry Nadir Eldad) is a hard-luck pizza-delivery boy with dreams of making the pro soccer leagues. Adiel (sensitive Adiel Zamro) is a handsome Ethiopian kid whose soccer skills are subverted by the racist gauntlet he must run at school, and the chasm between the white soccer world and his black family and mall buddies. The film subverts its formula by realistically depicting dreams dashed and talent frittered away in a money-grubbing, ethnically divided society that looks suspiciously like ours. Salmona gets incendiary performances from his age-appropriate, gorgeous young cast, many of whose lives mirror their characters. (Kabuki, 5/4, 5, 7)

I Served the King of England I was barely 23 when I caught Jiri Menzel's sly comedy about a terminally shy Czech apprentice stationmaster, the Oscar-winning Closely Watched Trains. Then, it felt like the burgeoning youth movement might extinguish the Cold War. Forty years later, Menzel returns with an equally lyrical portrait of a more ambitious if not wiser apprentice.

It's the 1930s, and pipsqueak millionaire wannabe Jan Dite (Ivan Barnev) is a plucky waiter who goes up the food chain of ever-fancier restaurants until he finds himself running a Nazi health spa. Menzel, adapting the novel of Czech master Bohumil Hrabal, depicts a society of posh wastrels dancing to oblivion. It's a gently amusing, surreal vision that dishes up hard truths in an unsentimental but never brutal fashion. There's a parallel story of an older Dite fresh out of a Communist jail, stripped of his wealth and reflecting on his mistakes. A comic gem! (Kabuki, 5/3)

Faubourg Treme: The Untold Story of Black New Orleans Dawn Logsdon (director of the short, Tomboy) uses pre-hurricane video to detail how the story of a Katrina-ravaged New Orleans black neighborhood constitutes a guide to the bitter failure of Reconstruction. (Kabuki, 5/3, 6, 7)

Secrecy In the wake of Errol Morris' provocative exposÅ½ of the truth lying outside the frame of the notorious photos taken at Abu Ghraib, Peter Galison and Robb Moss ask journalists on the spy beat, as well as former spooks, to give their side of the government's ongoing campaign to keep us in the dark. (Kabuki, 5/3, 6, 8; PFA, 5/5)

Up the Yangtze Canadian-Chinese filmmaker Yung Chang, searching for the China he had heard described by his grandfather, instead discovers a starkly different landscape: desperately impoverished country folks losing their ancient villages to the waters created by the dam project. The film profiles the lives of two teenagers applying to work on the private ferries that guide foreign tourists past this new Atlantis: a handsome if cheeky aspiring pop singer and a peasant girl whose uprooted family's survival depends on her earnings as a ferry waitress. (Kabuki, 5/4, 6; PFA, 5/8)

The Judge and the General The dramatic story of a conservative jurist's investigation of atrocities committed under Chilean dictator Auguste Pinochet. (Kabuki, 5/4, 5, 6)