Our film cup runneth over 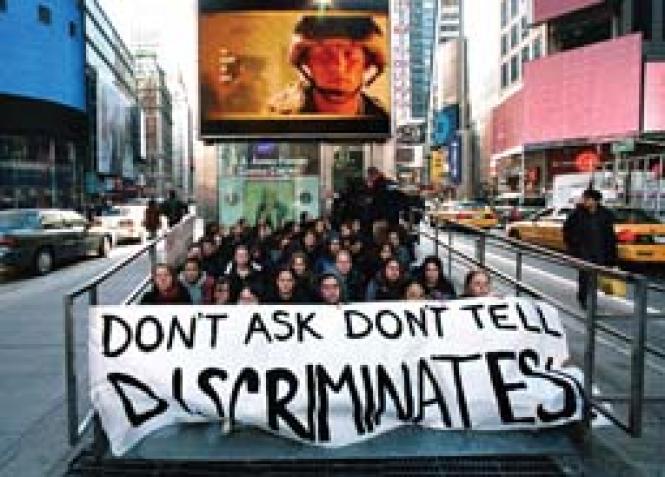 Ask Not Oakland filmmaker Johnny Symons provides a vivid behind-the-scenes portrait of the movement to repeal "Don't Ask, Don't Tell." It's hard to believe that 15 years have passed since Bill Clinton capitulated to right-wing attacks on his proposal to allow gays and lesbians to serve openly in the military. At one point, Symons' camera gazes out at a display of 12,000 American flags, each banner representing a discharged queer servicemember.

The film contrasts Clinton's mangled compromise with the forthright steps taken to desegregate the military in 1948 by President Harry "The Buck Stops Here" Truman. Pausing to give both sides of the unit-morale argument about out LGBT troops, Symons points out that the US is the only major Western power still observing the ban. The highlight of the rebuttal features a British Pride Parade with openly queer members of the Royal Navy. Symons mixes painful memories from ousted servicepersons with snippets of the Iraqi combat tour by a temporarily back-in-the-closet San Franciscan.

Ask Not's singular achievement shows love in bloom amidst a caravan of queer ex-servicemembers who give teach-ins and lead recruitment-center protests modeled after the lunch-counter sit-ins of the early 1960s. (Castro, 4/26; Kabuki, 5/5)

Standard Operating Procedure If Ask Not delineates the cost of exclusion from the ranks of those allowed to serve the country, then this emotionally and visually devastating indictment of the Bush/Cheney "War on Terror" documents the even higher price extracted from those deemed unfit to join the "boys' club" running the war machine. Even the title of this nuanced and layered interrogation doesn't come into focus until the third act, as Oscar-winning doc-maker Errol Morris gets too close for comfort to the multiple deadly meanings behind the shocking pictures from Abu Ghraib prison.

When Morris introduces his cast, the military police officers guarding the prison, he calls Sabrina Harman the MP unit's "blithe spirit." He quotes from her letters home to Kelly, "the woman she called her wife." On October 20, 2003, Harman wrote to Kelly about finding "'the taxicab driver' handcuffed backwards to his window, naked with his underwear over his head and face. One of the guys took my asp and started 'poking' at his dick. Again I thought, okay, that's funny. Then it hit me, that's a form molestation."

The pictures Harman took to "record" what was happening later came to be viewed as the crime itself rather than evidence of brutal interrogations conducted out of camera range, in violation of the Geneva Convention. Morris argues that grunts, like MP Harman, became fall guys for the national shame of Abu Ghraib. Errol Morris will be at the screening. (Kabuki, 4/29)

In the City of Sylvia Spanish director Jose Luis Guerin plants us firmly and perhaps uncomfortably in the head of a lovesick sketch artist (Xavier Lafitte) as he passionately pursues a young woman in a red dress (Pilar Lopez de Ayala) through the parks, cafes and electric trams of Strasbourg. Guerin brilliantly blurs the line between infatuation, voyeurism, stalking and the narcissistic beat of an eternal youth culture.

Guerin deliberately tries our patience. We first glimpse the rakishly handsome actor as he strikes a dreamy pose for a mesmerizing two minutes: his is the almost sickly, bland beauty of a slowly aging bohemian. For queer fans, it helps that Lafitte is a worthy candidate for a just-short-of Death in Venice crush.

There's no cloying music track Ã¢â‚¬â€ instead, Guerin employs an ear-catching concerto of ambient sounds: footsteps substitute for heartbeats; the one scene with dialogue is a witty undressing. Imagine tailing the man of your dreams from the CafÃ¯Â¿Â½ Flor to the Marina, only to discover you may have made an embarrassing mistake. Village Voice critic J. Hoberman will be present to defend his choice and receive a prize named for Castro impresario Mel Novikoff. (Kabuki, 4/27, 29, 5/2)

Topsy-Turvy I knew that operetta masters Gilbert and Sullivan grew to hate each other, but this lavish tribute to the quarrelsome duo underscores why. The story, set at the time G&S conceived The Mikado, features a first-rate British ensemble headed by Jim Broadbent as the furious playwright/lyricist W.S. Gilbert and Allan Corduner as the frequently bedridden composer Sir Arthur Sullivan.

Black Belt If you're as tired as I am of formulaic martial arts films, this ferociously staged Japanese period piece (by Shunichi Nagasaki) may revive your faith in the genre. Set after Japan's invasion of Manchuria, the story follows a trio of young karate students following the death of their master and the invasion of their school by villains worthy of Indiana Jones. Tortured characters and brutally believable action sequences honor the tradition of films like Shane and The Seven Samurai. (Kabuki, 4/25, 27, 29)

Brick Lane Sarah Gavron's astonishing debut feature draws on Monica Ali's daring post-9/11 story depicting the tribulations and temptations of an unworldly young Muslin woman drawn, via an arranged marriage, to a working-class London neighborhood from a tiny village. Nazneen (the electric Tannishtha Chatterjee) finds herself torn between her self-deluded misfit husband, her English-raised daughters and a handsome Anglo/Bangladeshi fabric salesman (the beguiling Christopher Simpson) who steers her towards the cauldron of extremist politics. (Kabuki, 4/25)

Time to Die The wickedly funny and mentally agile Danuta Szaflarska gives us a brazen portrait of a furious old widow suspicious of everybody from her loutish son (shown in flashbacks as a heartbreakingly sad boy) to her rude, voraciously hungry granddaughter, to greedy government housing inspectors, to an audacious young housebreaker named Dostoevsky. Aniela's only pal is a nimble, scene-stealing border collie, Philadelphia. Writer/director Dorota Kedzierzawska keeps comic beats balanced against poignant glimpses of a long-lost world. This gorgeous bit of b/w cinema merits comparisons with Ingmar Bergman's classic Wild Strawberries. (Kabuki, 4/30, 5/1, 6)

1,000 Journals This affectionate investigation of a fantastical San Francisco art happening is a tad long, but still a mostly engaging take on an Internet-savvy post-9/11 generation's hunger for human connection. The best parts of Andrea Kreuzhage's video about the fate of 1,000 randomly distributed blank journals are episodes from a hurricane-ravished Florida and a culturally isolated Singapore. (Kabuki, 4/26, 28, 5/1)