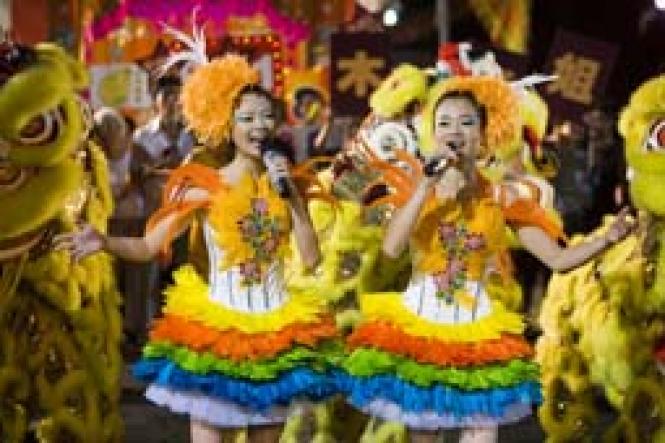 881: Singapore auteur Royston Tan Ã¢â‚¬â€œ known hereabouts for his unflinching portrayals of a quartet of Singapore tattooed love boys in his punk influenced debut feature 15 Ã¢â‚¬â€œ returns to the festival with his native city-state's version of Bollywood: a shamelessly campy Singapore performance art known as getai, a folk based cross-dressing festival that lets boys be girls and everybody else channel their inner diva. (Castro/3-16 & PFA/3-21)

A Thousand Years of Good Prayers : Kicking off this year's Wayne Wang retrospective are rare public screenings of his classics: the Hollywood produced version of Amy Tan's bestselling novel, The Joy Luck Club (Kabuki/3-17), and the funky Hong Kong slice of life, Life Is CheapÃ¯Â¿Â½But Toilet Paper Is Expensive. (Kabuki/3-18)

My own favorite Wayne Wang memory goes back to his 1985 San Francisco set mini masterpiece, Dim Sum. It was first time I noticed how a culture could, in effect, edit a film Ã¢â‚¬â€œ how the rhythms of a couple of millenniums of tradition could determine the length and pacing of a scene where nothing is apparently happening except the passing of an electric trolley bus or a nonchalant moment inside a Chinatown bar where two generations tolerate each other while in the background Hank Greenwald chatters on about a long ago Giants game.

In his new film, Wang cradles the inauspicious reunion between a Beijing native father and his recently divorced estranged daughter in the banal comings and goings around the daughter's antiseptic suburban townhouse complex. As daughter grows increasing furious at her father's meddling, the old man is adrift in a daytime world where the complex is as barren of life as the lunar surface. A marvelously comic interlude finds dad hosting a couple of blonde haired Mormon missionary kids whose "good news" passes right by an senior citizen who has all he can do to master a Spokane bus schedule.

A clash of civilizations plays comic havoc with a generation gap. On the same program with the equally intriguing The Princess of Nebraska (Wayne Wang co-directing with Richard Wong) as a female college student, Sasha (Ling Li) seeks an abortion through the not so helpful offices of her missing boyfriend's male lover. (Castro/Opening Night/3-13 & Gala Party at SF Asian Art Museum)

Sing-Along Colma: A dark, terminally bitchy Ã¢â‚¬â€œ far more profane than Avenue Q Ã¢â‚¬â€œ spot-on slam on middle-class kitsch, shopping mania, posturing, smugness and homophobia Ã¢â‚¬â€œ directed by Richard Wong from a script by H.P. Mendoza (who bravely provides a distinct edge and vulnerability to the very disgruntled, very gay Rodel) gives a uniquely third generation Asian American spin on the blandness of all those neatly furnished homes and dreams of parental units, whose own parents migrated from the Philippines, South Korea, Vietnam, Cambodia, Laos to allow their offspring to be American lawyers, doctors, dentists Ã¢â‚¬â€œ when many of them just want to dance. (Kabuki/3-17)

The Voyeurs: Director/Writer: Buddhadeb Dasgupta. This topsy-turvy tale of humans at the mercy of their machines focuses on two country bumpkins, whose boredom installing security cameras for uptight urbanites (Calcutta) is slaked by a special installation: a camera hidden away in the bedroom of their beautiful new neighbor, an wannabe actress, Rekha (Bollywood star Sameera Reddy). Their nocturnal snooping comes to a preposterously bad end when the police are summoned. This is one of the truly odd moments at this year's festival Ã¢â‚¬â€œ a surreal style exploring a techno loss of innocence. (Clay/3-17 & PFA/3-19 & Camera 3-23)

The Home Song Stories: Joan Chen gives a harrowing performance as Hong Kong nightclub singer Rose, whose fateful decision to marry an Australian sailor puts a curse of eternal wandering upon her small family. Children Tom (a touching turn by child actor Joel Lok) and May hope against hope that their volatile parent will eventually find stability and contentment with one of a gaggle of "uncles" who become temporary daddies through a heartbreaking trek across urban Australia. Chen is brilliant as a tragically mercurial woman, cursed both by her beauty and by the culturally sanctioned abuse she endures at the hands of a cruel first husband. It is to Chen's credit that we never lose sympathy for a woman who is literally incapable of taming her nature to protect her kids. Told in flashbacks by the now adult Tom, Director/Writer Tony Ayres has crafted a poignant memoir of the Chinese Diaspora. Notable for a total hunk alert: Rose's Chinese common law husband played by Qi Yuwu. (Kabuki/Closing Night/3-20)

Slingshot: Director Brillante Mendoza, with writer Ralston Joel Jover, uncover a Dickensian feast of petty crime and naked flesh in a vibrant Manila slum. Using lightweight video cameras and an energetic youthful cast, the filmmakers show a carnival of human foibles. Opening with a nighttime police raid, we meet the core cast: a hobgoblin array of petty career criminals whose lives are thrown into disarray as they attempt to hide their loot and in some cases cover their privates. Among the ruffians caught in the act are a gay couple and numerous shagging straights Ã¢â‚¬â€œ there's a lovely glut of male nakedness including some frontal nudity.

On the serious side, Mendoza and company capture the official hypocrisy of politicians paying for repeat votes Ã¢â‚¬â€œ a scene right out of Preston Sturges captured with the techno finesse of a modern stunt fest like the Bourne series. (PFA/3-15 & Kabuki/3-18)