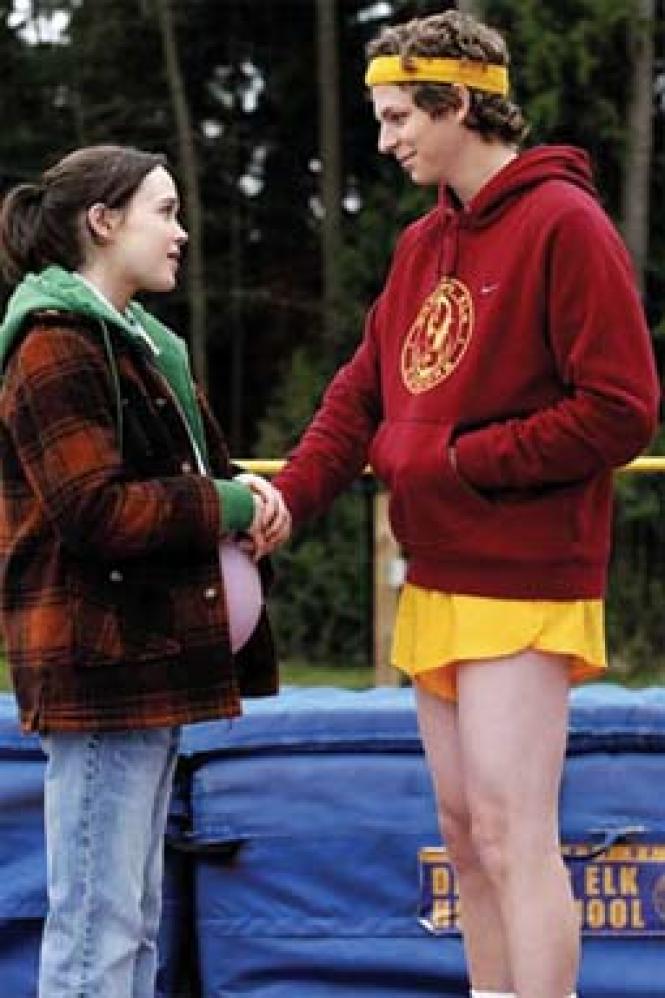 In Juno, 16-year-old Juno MacGuff (Ellen Page) is appalled to discover that's she failed a convenience-store pregnancy test. It's not that she's ashamed exactly, or puzzled about the identity of the dad-to-be, her sweet-as-pudding, not-exactly boyfriend Paulie Bleeker (Arrested Development and SuperBad's Michael Cera). It's not that she's reluctant to confess to the parental units Mac and Bren MacGuff (Spiderman 's tight-fisted tabloid news guy JK Simmons and The West Wing's Allison Janey) or that she's afraid she's going to hell. Organized religion plays no role whatsoever in the slightly jaded post-feminist world concocted by smart-as-a-whip screenwriter Diablo Cody for director Jason Reitman (Thank You for Smoking ). Actually, one of the most refreshing things about this breezy new comedy is just how casually everyone appears to take the once-dreaded subject of unwed teen pregnancy. I say "appears" because Reitman/Cody aren't actually as blasÅ½ as they may first seem about the consequences of this unexpected "home doodle."

After only a brief pause to figure out how soon she's going to show, Juno hits on a plan to settle her doodle's fate: advertise for a spunk-challenged couple in the local Penny Saver. Voila! Juno and Mac are soon visiting the world's cutest, smug, childless yuppie couple: Mark and Vanessa Loring (Arrested Development's Jason Bateman and Alias ' Jennifer Garner). Just when you started to wonder whether Juno has solved her unborn baby blues only halfway into Act II, you meet the Lorings and start to grasp just where this film about "true love" is truly headed. Before you can say Sid and Nancy, Mark and Juno are sneaking behind Vanessa's back to indulge a mutual passion, rock-n-roll. Juno's a devotee of 70s punk, while Mark's tastes are far less prepossessing: he likes just what you might expect a stay-at-home husband who pens music for hip TV ads to like.

If there's anything to fault Juno for, it's that Reitman/Cody didn't pedal-to-the-metal their potentially shocking story-beats just a tad further: Juno and Mark cry out to be placed in much more morally compromising circumstances. Juno's inadvertent home-wrecking should exact a heavier penalty and provoke a few more laughs.

Ultimately, the film heads for the year's coolest sweeter-than-we-deserve teen couple. Yes, Juno and Paulie do become an unexpectedly nifty item as soon as their noodle has been safely plucked from the oven. While it's not quite this year's Little Miss Sunshine, Juno does captivate whenever these too-cool-for-school Canadians, Page and Cera, are unleashed. Page may be the only actor not still in her teens who can get away with some of her character's arch one-liners pushing the limits — such as when she saucily informs the Lorings that instead of child-shopping in the Penny Saver, "You should have gone to China, where I hear they give babies away like iPods."

Brampton, Ontario native Cera is quickly becoming the go-to kid for exploring the previously neglected domain between jock and nerd. Cera, whose Arrested Development character included a running gag about kissing his first cousin, has an old pro's knack for underplaying lines, so that in a pivotal scene where Juno confronts him for inviting a cheerleader to their prom, Cera's Paulie can gracefully intone without a trace of meanness or inappropriate irony, "She's not giving you the stank eye, that's just the way her face looks."

Tremendous credit must be given to fledging screenwriter Cody, who honed her skills by day as an ad copywriter, and by night as a singles-bar stripper. She keeps us hooked with a story that begins with a girl busting to pee until her pregnancy test comes up negative, and ends with love-birds and dueling guitars.