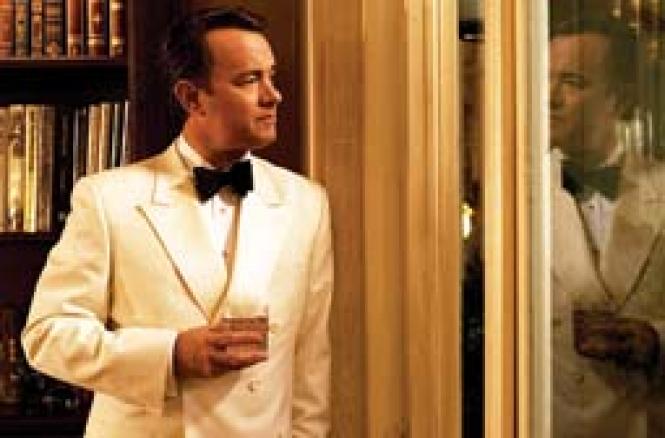 Charlie Wilson's War opens with a slightly pudgy East Texas Congressman sitting naked as a jaybird in a Vegas casino hot tub. Later in the story, Charlie Wilson will come under FBI scrutiny for allegations that his female escorts were feeding him nose candy. In point of fact, the brazenly liberal lawmaker (by Texas standards at least: pro-choice, pro-Equal Rights Amendment) was about to be hooked on a far headier rush. He was using his behind-the-scenes political muscle to engineer one of modern history's most devastatingly effective covert dirty little wars, funneling over a billion dollars in US government money to arm Afghan tribesman to expel Soviet troops, and effectively end the Cold War.

In the new "serious comedy" from Mike Nichols (tautly written by The West Wing's Aaron Sorkin), Tom Hanks employs his own nice-guy credentials, talent for serving up memorable one-liners (remember "There's no crying in baseball!"), and bemused amiability that functions equally well in slapstick as in mock heroic mode. Charlie Wilson's War makes us like and even root for two guys — the second a rumpled, cynical, working-class rogue CIA agent, Gust Avrakotos, played with scene-stealing audacity by Philip Seymour Hoffman — who, it can be argued, inadvertently set the stage for the 9/11 attacks.

To its credit, this is the rare Hollywood film that takes pains to detail how our government really works, and why the most effective "players" are often guys who never hit the talk-show circuit.

For queer filmgoers, Charlie Wilson's War reintroduces us to an old foe. The late George Crile, who spent more than a decade getting an inside-the-Beltway and Texas moneyed crowd, which mostly shuns the limelight, to tell all, is the same intrepid TV reporter/producer who, in April 1980 (just before Charlie Wilson had his hot-tub epiphany), broadcast the first national exposÅ½ of the effect the then-burgeoning gay movement was beginning to have in urban America. As I wrote at the time (for the Fruit Punch gay radio show): "With their cameras at ass-and-crotch level on Castro Street, [Crile's] CBS-TV crew conceded that gay men have carved out some turf where boy can meet boy. The underlining message of Gay Power/Gay Politics is that these gay boys (with their 500 tricks per man-sized sexual appetites) had better be contained here, or else, look out America!"

Crile's reportage was later successfully challenged in a complaint to a journalistic watchdog group by gay gadfly Randy Alfred. For all its flaws and calculated sensationalism, Gay Power/Gay Politics, like the far more sophisticated Charlie Wilson's War, revealed a sensibility keenly attuned to the intersection of private behavior and movements prompting momentous changes in the social/political landscape.

Reportedly, Tom Hanks' production company was pressured by the story's real-life players to significantly alter Sorkin's original script, which apparently drew a much closer connection between the victory of the Afghan Mujahideen and the bin Laden-led assault on America. The resulting film is more Ninotchka than Syriana, with the best scenes and insights tied directly to the odd collisions between Wilson's playboy and caped-crusader personas.

The movie's centerpiece is a masterfully constructed slapstick sequence where Hank's Wilson is having his first meeting with Hoffman's seedy attired Avrakotos, when the men keep being interrupted by a flying squad of Wilson's female aides (one deliciously nicknamed "Jailbait") led by the awesomely funny Amy Adams. They're "Charlie's Angels," as it were, trying to save their boss from being tied into an FBI cocaine sting. All through the scene, Hoffman's rumpled agent keeps exiting Wilson's office, only to be ushered back in for more skullduggery on prying loose Pentagon money to arm the Afghans through a mostly unlikely Israeli conduit. The proceedings bubble neatly over-the-top just as we discover that Avakotos has bugged the liquor bottle that he brought as an initial peace offering.

As is often the case with Hollywood, the movie stars give the real-life, less reputable characters a magic patina of charisma and good works that was probably a great more suspect in fact. Hoffman, startlingly good in his third released film of the season, here resorts to a few physical stunts to demonstrate why he wasn't an easy fit with the CIA's resident bluebloods: the intro to the film has him smashing out the glass to his spy boss' office. In the book, Crile, with his ear for gay subversive angles on his gallery of espionage delinquents, quotes the real Avrakotos as describing his riff with the CIA ruling-class succinctly: "The only reason half of them got anywhere is because they jerked off Henry Cabot Lodge's grandson at some prep school."

Hanks is at his best in those scenes when he impersonates a good old boy, smart as a fox, who deliberately plays the rube to the foreign potentates — as in a scene where he provocatively asks for a glass of whiskey in the office of Afghanistan's military dictator.

Later, a devastating aside indicates how Wilson would rather act the fool than actually be one. "I've just been told I had character flaws by a man who hung his predecessor in a military coup."