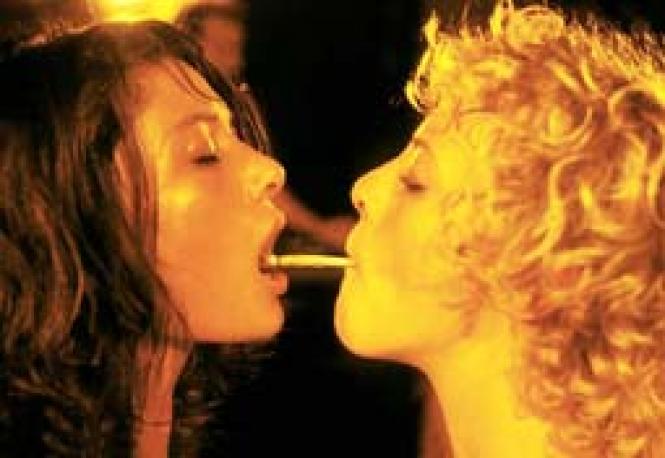 Lesbian love figures in The Edge of Heaven.
Photo: Courtesy Berlin & Beyond

This 13th edition of Berlin & Beyond (German-language films from Germany, Austria and Switzerland) unspools at the Castro Theatre January 10-16, with over 30 programs, panels and parties.

The Edge of Heaven In the second part of a trilogy about love, birth and death, the German/Turkish writer/director Faith Akin introduces us to several passionate characters compelled to choose between exile, jail or death. In Act I, a bullying pensioner, Ali, strikes a hard bargain with a beleaguered prostitute, Yeter. Their deal abruptly culminates in tragedy, but not before Ali's college professor son, Nejat, develops a profound bond with the woman and her struggle to educate her Turkish-born daughter, Ayten. Yeter's untimely death sends Nejat back to Turkey to help Ayten, who ironically has had to flee Istanbul one step ahead of the police. Arriving penniless in Germany, Ayten jumps into bed with a nonconformist female student, Lotte, who helps her seek political asylum over the strenuous objections of her own conservative mother.

With an all-star cast headed up by Baki Davrak Ã¢â‚¬â€ ravishingly seductive here as a conscience-stricken intellectual, and fondly recalled by many queer fans for his audacious debut as a gay Turkish Berliner in 1997's Lola and Bilidikid Ã¢â‚¬â€ and Fassbinder veteran Hanna Schygulla (The Marriage of Maria Braun ); an outlaw lesbian couple, until death do them part; along with vivid depictions of a Turkey torn between the remnants of its ancient Eastern empire and a tantalizingly possible Western future, The Edge of Heaven will delight an opening-night Castro crowd, as well as proving beyond a doubt that Akin has topped his 2005 art house hit Head-On. For those whose knowledge of Turkey comes mostly from cable TV, Akin will wow you with the horrifyingly entertaining sight of a squad of Turkish anti-terrorist cops chasing after an armed adolescent girl. (1/10, 8 p.m.)

The Other Boy At first glance, Volker Einrauch's TV drama (with writer Lothar Kurzawa) is a portrait of two hyper-normal suburban families: the dads work together, the moms are superficially friendly, and both dote on their handsome teenage sons. It turns out that the boys, Robert (Willi Gerk) and Paul (Tim Oliver Schultz), are mortal enemies: Robert, small for his age, is the victim of the bigger boy's merciless bullying. Things come to a head one afternoon when Robert shoots Paul to death with a gun the latter boy has borrowed from his macho dad (Christine Berkel). Robert's parents arrive to find their boy in an almost catatonic state, still clutching the weapon. Dad (Peter Lohmeyer, effectively conveying the sudden resolve of a once-passive man) promptly disposes of the body, pockets the weapon and hatches a plan to deflect suspicion onto a local wild boy/drug dealer (Adrian Topol).

The film slip-slides between awkwardly paced melodrama and an acute psychological thriller: the dead boy's mother (Barbara Auer) and Robert form an odd bond that cries out to be taken to its logical if uncomfortable conclusion; and the dead boy's dad has a harrowing showdown with the innocent scapegoat that should please queer fans for its lusty S/M subtext.

The Other Boy intrigues and frustrates by partially squandering a wounded naÃ¯Â¿Â½f performance from the evocative Willi Gerk that recalls the best moments from the rÃ¯Â¿Â½sumÃ¯Â¿Â½ of the young Edward Furlong. (1/14, 4 p.m., with a personal appearance by Hinnerk Schonemann, who plays a sexy young homicide detective.)

Neandertal This dark comedy about a handsome boy (Jacob Matschenz) trying to escape a brutally punishing skin condition takes some diverting and perplexing turns as writer/director Ingo Haeb seeks a metaphorical lift from the story's setting: the birthplace of Neanderthal man. (1/12, 5:45 p.m.)

Nevermore Toke Constantin Hebbeln's beautifully filmed fable transforms the tragic tale of an old fisherman and his young son into a story with beats recalling Bergman's Fanny and Alexander. (1/11, 3 p.m.)

Heavy Metal in the Country Andreas Geiger spotlights the rise of Nuclear Blast Records, and its owner Markus Staiger's goal to put heavy-metal kitsch within the reach of head-bangers everywhere. Best moments are scenes of the now 40-something Staiger taking yoga instruction to finally outgrow his own prolonged adolescence. (1/13, 10:30 p.m.)

Shoppen In a first-rate entry for a festival stressing comedy, writer/director Ralf Westhoff has a good time poking fun at Munich's swinging singles set. The core of the piece involves a speed-dating competition in which nine men and women switch off giving each other a hard time. Crafted like a jigsaw puzzle constellation of nine one-act plays, Westhoff's film allows his talented young ensemble to poke into every pratfall and icky insecurity about modern coupling. From the anxious female who confesses that her most physical moments of this young century have unfolded on a massage table to the young man who worries that he's not missed all the sex he hasn't been having, to the lumberjack waiting to pounce on the yoga babe, to the sweet guy who insists on cuddling through the night, to guys and gals who are unspeakably rude, Shoppen confronts the bittersweet truth that modern dating and consumerism are the true terrible twins of our time. Pity there's no queer content, but your imagination and gaydar should guide you to some likely candidates. (1/11, 6 p.m.)

The Red Elvis Leopold Grun spins the fascinating if ultimately puzzling tale of a charismatic young American pop singer whose pipes, country-boy good looks and devotion to socialism gave him a brief if meteoric career in several Latin American and Eastern Bloc countries. With testimonials from Armin Mueller-Stahl and Isabel Allende, and scenes of Grun's subject singing in Red Square, performing in spaghetti Westerns, and making a sad swan-song appearance on 60 Minutes, you may wonder why most of us have never heard of Dean Reed. (1/12, 1:30 p.m.)

Grave Decisions This frisky romantic comedy (from director Marcus H. Rosenmuller, with co-writer Christian Lerch) puts a mischievous 11-year-old boy at the heart of a slapstick-fueled search for a new mom and second wife for his saloonkeeper dad. The film pays affectionate tribute to the American 60s counterculture. (closing night, 1/16, 7 p.m.)