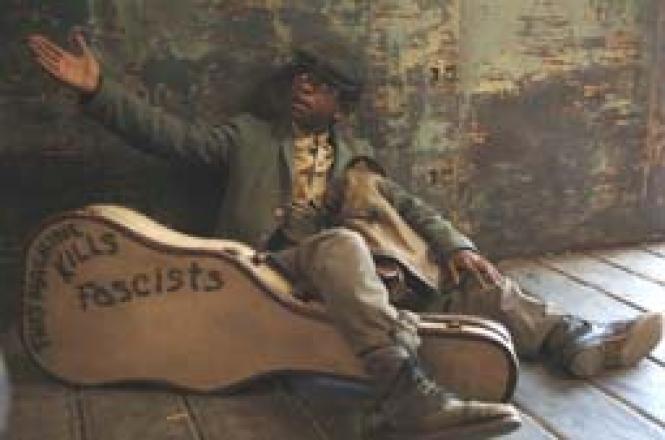 Marcus Carl Franklin in I'm Not There
.

I guess the biggest disappointment I had with Todd Haynes' new Bob Dylan film I'm Not There is how little fun I was having watching it. I'm part of the generation who first fell in love with a scrawny, short-haired Dylan, the Dylan who boasted of being somebody who couldn't possibly be on the way to being somebody better; the Dylan who stole records he wanted to mimic; who visited his idol, Woody Guthrie, in a mental hospital; who played the pass-the-basket clubs in the Village; who got the big-time Columbia record contract because the purest folk labels hated his nasal twang; the Dylan who went electric, denouncing a balding older generation, who grew his own Jewish afro out til it rivaled the burning bush, who taunted the stuffy press, and finally used the occasion of a motorcycle accident to flee his fans, get married a few too many times, find Jesus, lose him again, rediscover his Jewish roots, record over 773 songs, and begin the "eternal tour."

What do you do with a guy like this? I must admit I lost touch after his 1976 single to free boxer Hurricane Carter, and before the Christian thing. Haynes, bless his heart, obviously has never forgotten little Bobby Zimmerman from Hibbing, Minnesota, a place Dylan once quipped was so cold that the weather rendered pointless all rebellion.

Haynes slices Dylan into six unequal pieces, and passes the roles out to six completely different performers. The two who steal the movie are in some ways a surprise. Marcus Carl Franklin's 11-year-old hobo pretending to be Woody Guthrie Dylan charms right out of the box. The kid has the moxie and performing mojo to seduce us into loving this wildly improbably little character who's attacked by rail-riding tramps, falls into a river, and is fished out by a kindly black family whose matriarch leaves him the advice, "Sing about your own time, child." Thus we have the Dylan who borrows Woody's syntax and turns into a confounding spokesman for his generation.

Woody passes the baton to "Jude," Cate Blanchett's surly punk, who starts to freak out while on tour. This is the heart and soul of what Haynes has offer: a Dylan who's funny, sexy, defiant, cavorting with the Beatles one moment and virtually lunging at the throat of a pompous, BBC-like journalist (Bruce Greenwood) the next. Blanchett keeps her Dylan from being a gender stunt, manifesting the then-mid-20s Dylan's amphetamine-and-cigarette-fueled energy. Her Dylan looks up at a statue of Christ on the cross and taunts, "Why don't you do your early stuff?" This black-and-white segment, aping the style and punch of D.A. Pennebaker's Don't Look Back, also mimics Woody Allen's trenchant, slightly mean-spirited but often hilarious slap at his early fans, Stardust Memories.

Sadly, the other Dylans get lost in the shuffle. The boyish Ben Whishaw, who seems less manly than Blanchett, is forced to sit and pout, spitting out inscrutable one-liners to a motley assortment of boorish reporters. "I accept chaos. I don't know if chaos accepts me." Two of the Dylans blur into each other: Christian Bale as the born-again Dylan, who seems about to reject his earlier songs; and a brawling Heath Ledger, who gets to play the private, chauvinist version of the singer, the guy who dumped Joan Baez and ran through a series of bad marriages.

Ledger's "Jack" the actor gets stuck with the stagiest and least-flattering side in this drunken conversation with a female fan: "So you're a chauvinist."

"Because I believe guys and chicks are different, and women can't be poets."

"You're missing the point completely."

"I worship women. Everyone should own one."

And then there's Richard Gere's Western legend Dylan, the movie's John Wesley Harding homage, a character who wanders aimlessly through a landscape that seems stolen from a Sam Peckinpah movie.

What does this all add up to? Like a lot of overly ambitious film ideas that elude their creators, I'm Not There keeps promising to give us something to replace the Dylan many of us knew and cherished.

Last year, Martin Scorsese helmed an awesome documentary tribute, No Direction Home Bob Dylan, featuring Dylan's eloquent and straightforward telling of his real story, along with a host of one-time rivals who can't help admiring the man who stole their stab at stardom. Liam Clancy perhaps best summed up the astonishing debut that even Dylan could never live up to:

"He was Charlie Chaplin, he was Dylan Thomas. He talked like Woody Guthrie, he was constantly moving. In old Irish mythology, they talk about the shape-changers: he changed voices, he changed images, it wasn't necessary for him to be a definitive person. He was a receiver, he was possessed. He articulated what the rest of us wanted to say, but couldn't."