When Presidents were smart 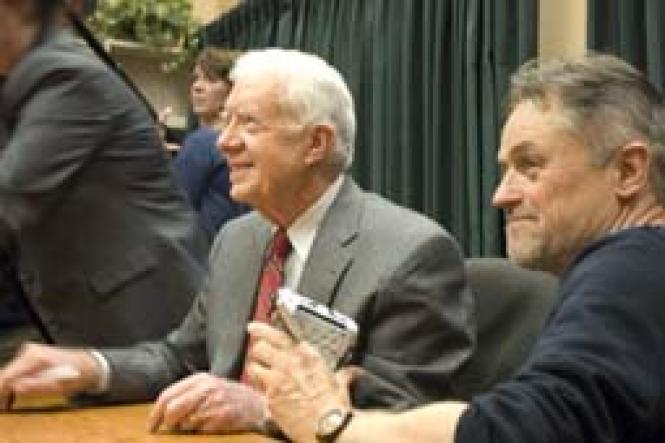 If, by some miracle, Barack Obama becomes our 44th President, he'd be wise to study Jonathan Demme's whirlwind portrait of the Renaissance Man from Plains who became our 39th. Born the same year as Truman Capote, James Baldwin, Norman Mailer and Gore Vidal, Jimmy Carter is a throwback to the days when Americans elected really smart people to look after their affairs. As Obama may discover, Americans don't always take well to being blindsided by history, or being offered the chance to be led by an individual who's a lot better than they deserve.

Granted virtually total access by their subject, an 82-year-old human dynamo who swims daily and keeps hours that would exhaust a marathon runner, the filmmakers spend long, bumpy days in the jump seat of a Secret Service-driven SUV as Carter sets off on a media blitz for his book Palestine: Peace Not Apartheid. Don't see Demme's worshipful treatment of Carter if you expect a fair and balanced view of the book's hotly contested thesis that a West Bank, surrounded by an Israeli security wall, is more prison camp than future autonomous nation.

What Demme is really up to is a sly examination of how a shrewd former President manages to use his Nobel Peace Prize hero status to manipulate a largely indifferent if not outright hostile media. The film becomes a cook's tour through the sets and green rooms of virtually every significant TV showcase. Carter endures both hard-nosed and fawning interrogations, and suffers radio talk-show fools, but not gladly. We get an insider's view of the "kitchens" where our daily media is prepared, and come to appreciate Carter's ability to keep smiling and stay doggedly on message.

The film's piece de resistance occurs when Carter outmaneuvers the trustees of Brandeis University and manages to address the student body of the prominent Jewish institution while ducking a proposed debate with a fierce critic of the book, Harvard professor Alan Dershowitz. An unexpected joy is Carter's visit to National Public Radio's Fresh Air program, and the discovery that Terry Gross conducts many of her intimate chats without being in the same room or city as her guests. Two cathartic moments pop up in Roslyn Carter's unexpectedly moving plea for the country to stop ignoring the real needs of inner-city kids, and Jimmy's verbal love fest with a TV makeup woman who's related to civil rights martyr Medgar Evers.

Bob Dole once quipped that Carter won election by a margin equal to the Playboy subscriber base. Like many in my generation, I recall my vote for him as the only one I've never regretted. Carter's "lust in my heart" may or may not have been a calculated ploy to win over a boomer crowd too busy indulging various quixotic social experiments to test the sincerity of his Sunday school platitudes, but years out of office, Jimmy Carter demonstrates that a real leader doesn't need a rose garden to maintain a bully pulpit.