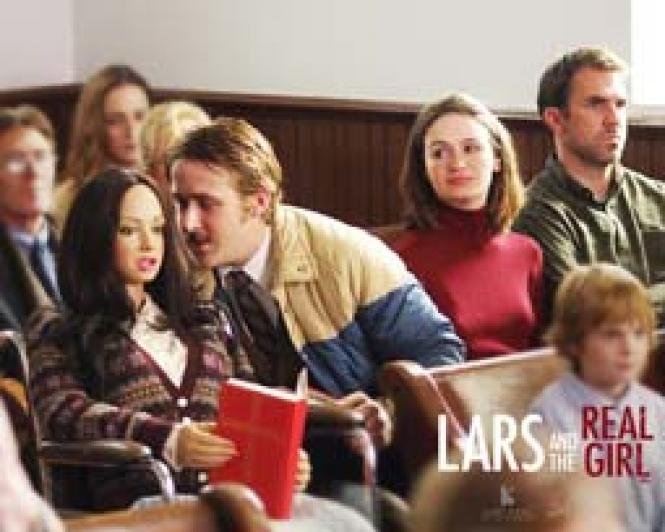 Ryan Gosling with Bianca in Lars and the Real Girl
.

In the nervous new social comedy Lars and the Real Girl, a young man is so allergic to social entanglements that his brother's wife throws him down in the snow in order to invite him to dinner. But even when you pin him down, Lars Lindstrom (another of Ryan Gosling's captivating screen misfits) is hard to house-train. Leaving church, Lars is cornered in the parking lot by an older woman bearing flowers.

"Well, give these to someone nice."

As the busybody drives off, Lars throws down the flowers with a look of genuine anguish. Throughout the film, we get mixed signals about just what we are to make of the young man's paralyzing shyness, his outlandish attempt to get into the social swim, and the third-act sermon suggesting that Lars has as much to teach us as Frank Capra's signature little guy, George Bailey.

One morning, Lars' deliverance arrives in a wooden box from UPS. Inside is a human-scale doll its manufacturer calls the Real Girl, whom Lars immediately renames "Bianca," explaining that she's his new Brazilian girlfriend. Lars resists the temptation of her anatomically correct features, and instead asks his bewildered older brother Gus (Paul Schneider) and his wife Karen (Emily Mortimer) to put Bianca up in his late mom's guest room, while Lars sleeps in a converted garage.

Director Craig Gillespie's film stirs a cautious course between Capraesque whimsy and our society's distinct discomfort confronting the sad and sometimes squalid delusions that keep our boats afloat. At the movie's core is a persistent disconnect: the shedding of innocence required by the journey from childhood to adulthood is equated too often with a kind of lobotomized state.