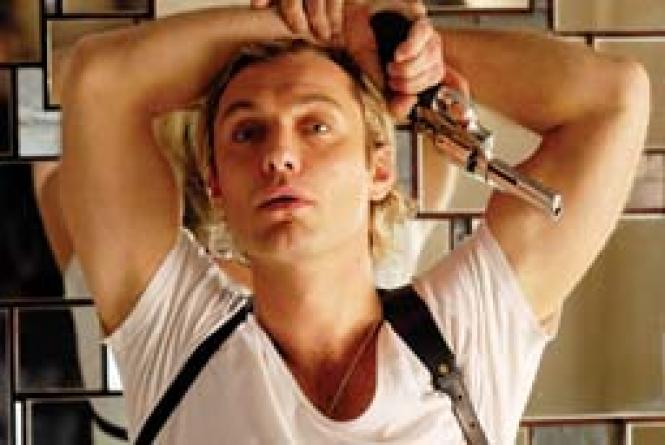 In the opening minutes of Sleuth, an older writer, Andrew Wyke (Michael Caine), receives a young male visitor, Milo Tindle (Jude Law), in a house that is so freighted with security cameras and laser-beam sensors that its owner would appear to be awaiting a home invasion by eco-terrorists or the Serbian Army. After a very short interval of polite chit-chat, the older man turns to needling the younger one. Wyke rejects the notion that Tindle is an actor, insisting he must be a hairdresser; even the name Milo seems to raise hackles: "Are you sure you're not Hungarian?" During all the edgy fencing, we are kept at a distance, forced to view the men through the video monitors. Just as our frustration peaks, director Kenneth Branagh invites us in, in time to hear Wyke pull the pin on the first of many verbal grenades. "So I understand you're fucking my wife."

I imagine that your enjoyment of the Caine/Law/Branagh Sleuth, adapted by Harold Pinter from the Anthony Shaffer play, will be enhanced if you've completely forgotten, as I have, the 1972 screen version with Lawrence Olivier as Wyke and Caine as Milo. Running a taut 86 minutes compared to the original's 138, this Sleuth is the Healthy Choice diet version, stripped of the extra calories of additional cast members and the bloating carbs of an extra 40 minutes of cat-and-mouse games. Pinter, winner of the 2005 Nobel Prize for Literature, knows how to draw every last deadly nuance of meaning from the simplest back-and-forth, and even more from the silences between words, pauses that send us slithering into the nastiest recesses of his characters' ids.

I'll skip film-spoiling plot details, and simply advise anyone who has given up on Jude Law fulfilling the promise of his recklessly cruel playboy Dickie Greenleaf in The Talented Mr. Ripley to give the British Adonis another look. If Caine manages to inject a layer of psychopathic menace into our familiar idea of the British mystery writer as a lovable eccentric living vicariously through his characters' twisted adventures, then Law's struggling lothario turned cat burglar matches the old bugger line for line, as in this Pinter-crafted exchange where Wyke challenges Milo's acting credentials.

"That sounds menacing. What do you play?"

In the new Sleuth, we soon forget that these men are locked in a deadly duel over the rights to a woman, Wyke's estranged and reputedly spendthrift wife, and start to grasp that theirs is a battle possibly to the death that involves one man dominating the other, in ways neither may easily cop to.

Branagh shrewdly stages much of the escalating second-act violence by having the men violate each other's personal space. Law slips out of his pretentious tweeds and into a tight white T-shirt that accents the full measure of his desirability, while Caine is at one point forced into a drag outfit that accentuates the dilemma of whether he will eventually be asked to surrender more than the family jewels. Whether this homo subtext strikes you as pandering to our age's porno zeitgeist or hinting back to the sado-masochistic ambiance of Pinter's earlier collaborations with Joseph Losey (The Servant, Accident ), it does give this leaner, meaner Sleuth an extra jolt of sleazy anticipation as the cold blue house's art treasures are sacrificed to a cliffhanging plot that may or may not deliver one of these bounders to the long arm of the law. Opens Friday.