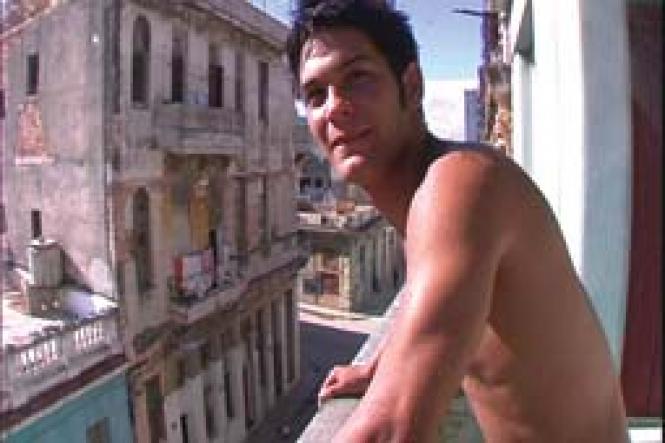 The 6th SF Doc Fest (Roxie Film Center, Sept. 28-Oct. 10) stakes out a unique place in the film exhibition spectrum, somewhere between Sundance and Public TV. Doc Fest films are typically not as slick, not as tightly focused, but reflect the all-consuming obsessions of their subjects and creators. At their best, Doc Fest films feel like personal invitations to participate in an idiosyncratic vision of some tiny slice of life.

Luchando As waves batter against Havana's famous sea wall, a gay man with bottle-blonde hair tells an American filmmaker about his crush on a macho street-hustler. Bringing the strapping Manuel home to a small flat has upset his bond with the apartment's owner, an older gay man. Soon Manuel will be back on the streets of the notorious Colon district, the gathering place for a small army of rural kids who nightly swap sex for a few dollars, or American sneakers or jeans.

Harvard-trained Noelle Stout brings a lightweight camera and an anthropologist's non-judgmental eye to her shockingly intimate portrait of four young Cubans whose lives are upended in Havana's illegal but booming gay sex trade. With the Cuban Revolution's model for an egalitarian "socialist paradise" in tatters without Eastern-bloc trade, Stout discovers that even gay-identified Cubans are reduced to begging dollars from tourists in a once-Catholic and still virulently macho society. Twenty-three-year-old La Diosa's ears are assailed by the daily taunts of kids and predatory young men: "Transvestite!" "Homosexual!" Ordered by her father to dress like a "normal" gay man, La Diosa says she prefers foreign-made female hormones to Cuban ones. Nineteen-year-old Yuris plays with a toy car as he describes his life's work: to father at least 10 children, by possibly as many mothers. Stout's camera shows Yuris in a violent altercation with one of his girlfriends. The vibrant Masciel, or "La Gorda," is a 34-year old bisexual who wants the fruits of hustling to underwrite an artistic life for her female lover. In lovely, lewd moment, she recalls sex with a submissive young man.

Luchando, a film that subversively redefines a Cuban word for revolutionary struggle, earned its maker a Harvard degree and expulsion from Cuba, while one of its subjects was sent to a political reeducation camp.

With: Overdue Conversation Filmmaker Charles Lum engages a onetime trick in an awkward dialogue about the unsafe sex they've had with each other in this raw, videocamera-mediated exchange about sex, responsibility and HIV.

Golden Days In this gem of a movie about a Brooklyn rock band that discovers how a big record deal can morph into career death, vocalist/songwriter Alex Dezen is trapped with bass player Ted Hudson in the bowels of a New York rock club. Graffiti with cocks and rude messages decorate the lime-green basement room.

"Do you want to hear about my dream that I had sex with a man last night?"

"Well I had sex with a friend of ours in my dream, but he had a vagina, so I'm hoping that that makes me less gay."

"Just because I like having sex with guys doesn't mean that I'm gay."

"You still like vaginas. You didn't have sex with him, you had sex with his vagina."

Chris Suchorsky breaks VH1's formula for rock-band sagas in his warts-and-all portrait of The Damnwells. During the 505 days he camps out with the band, there are no fistfights, drunken brawls, drug rehab or hotel room-smashing meltdowns. Instead we meet four talented young men who refuse to take themselves too seriously, even though they're offered the keys to rock heaven: an Epic Records contract.

Through the slow-motion train-wreck of a year in which they will record, rerecord and rerecord their possible breakout album, Golden Dreams demonstrates the elusive mix of talent, group chemistry and sheer luck that leads some to overnight success and others to the crash landing of one-night-stands, 15-seat vans and bad day-jobs.

As the "suits" dither, the irreverent Dezen loses his girlfriend, dog, and nearly his sanity wondering if the overpolished album will ever be released. The Damnwells' manager Wes Kidd uses rock's steamy sexual metaphors to explain their roll of the dice. "If you sign with the devil, be prepared to play their game. Don't take their money if you don't want to get an ass-fucking."

Dezen steals the movie with self-deprecating asides about an emotionally abusive dad; writing his first song, "Burn Down the Fucking School"; and meeting his musical soulmate while playing in a bad folk group. (9/29, 10/3)

Free Spirits Bruce Geisler's cautionary tale about the emotional roller coaster of life in a 1970s New England commune provides a fascinating parallel to the tragedy depicted in films about Jonestown. A survivor of the Renaissance Community Ã¢â‚¬â€ a 400-member experiment in group living that spawned a rock band, a greeting-card company and a generation of commune-raised, free-spirited kids Ã¢â‚¬â€ explains that he's surprised that Renaissance guru Michael Metelica Rapunzel avoided the self-immolation fate of Rev. Jim Jones. In many ways, Renaissance went from commune to cult to almost a small country, with its own peculiar, democratically conceived, cult-of-personality leadership. The knowledge that almost everybody escaped this community with new skills and their lives keeps this utopian recollection from devolving into a very bad trip. (10/4, 6, 8)

Radiant City Gary Burn's wry exploration of an Alberta, Canada "new town" has a teen, wise beyond his years, show us his hood from atop a cell-phone tower. "I better get down from here before I get a brain tumor." Nick Moss kids his family's overscheduled existence, where Mom plots activities on a color-coded magnet-board. Nick hangs with pals who stage a paintball-gun "assassination" video as their school art-project. The narrative is enlivened by a musical spoof of suburban life starring Dad, and boycotted by Mom. (9/29, 30; 10/4)

New Urban Cowboy The high price of junking an SUV lifestyle is documented in this offbeat tale of a California urban planner's sojourn to rehabilitate a crack-devastated corner of his boyhood Florida hometown. Over five years, Michael E. Arth, armed with a nail gun and a sense of purpose that would put Mayor Rudy to shame, turns the crime-ravaged Garden District of Deland, Florida into a House Beautiful cover story or, as one enraptured new homeowner gushes, "a real-life version of Mayberry." (10/1, 4, 6)

Eat at Bill's: Life in the Monterey Market Lisa Brenneis' portrait of a hip Berkeley organic vegetable market depicts how a community forms around one family's dream of a vegan heaven. Brenneis, using a time-lapse cinema verite style, shows how Bill Fujimoto is mentor, coach and friend to a sprawling network of Northern Californian organic farmers. If you've dreamed of searching for the perfect oversized mushroom, vine-ripened tomato, or sour cherry, Eat at Bill's will not disappoint. (10/6, 7, 10)

Audience of One This harrowing, oddly funny look at a fantastically misguided excursion in amateur filmmaking features San Francisco Pentecostal preacher Richard Gazowsky as a seemingly guileless mad prophet who takes an ethnically diverse congregation to Italy, where he insists they will shoot a Bible film that will turn Hollywood green with envy. Filmmaker Michael Jacobs has total access to the fiasco, which produces only two completed scenes along with a bundle of unpaid bills. That Gazowsky's leading creditor is the City of San Francisco shows that religious toleration and the suffering of fools are not dead in Baghdad-by-the-Bay. (Closing Night, 10/10)