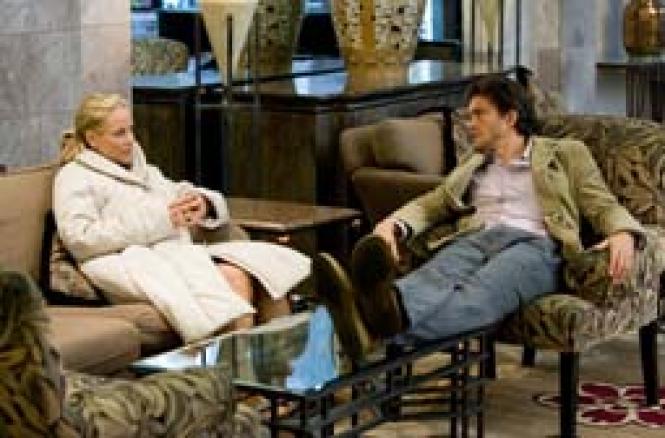 In the witty opening credits to The Jane Austen Book Club, Robin Swicord's breezy dissection of the woes of modern relationships, a young teacher about to embark on an affair with a male student is embarrassed when a store clerk fails to cut the anti-shoplifting tags from some scantily designed bras. Then we see Central Californians confounded by the chaos inflicted by their infernal conveniences: malfunctioning gas cards, cell phones in toilets, treadmills operating above the speed limit.

The story then abruptly opens onto the scene of a bachelor woman mourning the death of her dog, surrounded by sympathetic female friends and one thoroughly exasperated male. That man, Daniel (Jimmy Smits), starts to rag on his wife, Sylvia (Amy Brenneman), and their lesbian daughter, Allegra (Maggie Grace), about the toll the doggy death rite is taking on his crowded work schedule. In a matter of moments we will learn that Daniel's life is overbooked partly because he's two-timing his wife.

"All I know is, if I'm not back in the office this afternoon, Monday is going to be hell."

"She went to every one of Allegra's birthday parties."

"Come on, Allegra is our actual child! Let's have some perspective here. Do you think if Jocelyn were married with kids, she'd be giving her dog a state funeral? This whole thing's warped!"

"I find that personally offensive, dad! I may never be married or be a mother — yes, some gay women get some version of that, but we don't all need the same things."

"Can we at least agree that human beings need human connection, you know, companionship, conversation, sex?"

"You get those things from mom, Jocelyn gets them from her dogs." Dad and Allegra laugh.

Swicord's first screenwriting credit, 1989's Shag the Movie, reinvented the teen beach saga by having four girls and four guys actually talk to each other during a madcap summer weekend in Myrtle Beach, South Carolina. Fans of that film will not be surprised to find the Florida native copping her first directing credit with a female-centered gabfest based on the cult surrounding Jane Austen, the inventor of the romantic comic novel.

Despite the movie's cramming romantic mishaps down our gullets like the pilot episode of a mini-series (here, the normal 10-minute rule to see if a movie is going to cook for you needs to be stretched to 20), once we've finally met all the members of the club, the notion of viewing the discontents of the post-feminist generation through the prism of Austen's rulebook for combating incivility between the sexes starts to produce its share of entertaining screen moments.

Swicord's wild card is the club's "Austen virgin," an amiable, attractive science-fiction geek named Grigg (Hugh Dancy), who makes a strong play for the dog-breeder, Jocelyn, unaware that Jocelyn views him as a consolation prize for Sylvia, her just-dumped-out-of-a-20-year-marriage best friend. After metaphorically atoning for the sins of his sex, Grigg emerges as a complicated, playful, woman-loving guy who may just be a better man than any of the club's frustrated women actually deserves.

Swicord has fun with playing the cult of Austen off against the fanatical covens of science-fiction fandom, from Buffy -loving Goth kids to male admirers of Ursula Le Guin. The Grigg subplot also contains a surprisingly shocking Halloween fun-house sequence that SF spook-night buffs will want to imitate. Hugh Dancy soft-peddles his latest American accent, and dishes up a brand of non-alpha male charm that will allow some of us to forget his egregious recent turn as the drunken gay guy Buddy in the undercooked Fitzgerald parody Evening .

Not all of Swicord's attempts to provide a 21st-century array of happy endings quite match the satisfaction we get from the rapprochements Austen so carefully crafted for her daring ladies of Regency England. What modern girl would ever pass up a chance at a down-and-dirty, meaningless, tawdry affair with the likes of Kevin Zegers? He's the book clerk who almost nails his French teacher, a frightened mouse of a woman who gets a surrogate mother as compensation for the loss of a good back-seat fuck. Allegra's rebound from an ill-timed dalliance with a life-stealing creative-writing student feels a bit borrowed from a Fox sitcom, but then, queer happy endings should probably never be questioned.

At least The Jane Austen Book Club got me to crack the cover of Lionel Trilling's annotated edition of Emma, a book gathering dust on my shelves for at least 20 years. For as Trilling points out, "not to like Jane Austen is to put oneself under suspicion of a general personal inadequacy and even — let us face it — of a want of breeding."