Paparazzi lessons for a quick learner 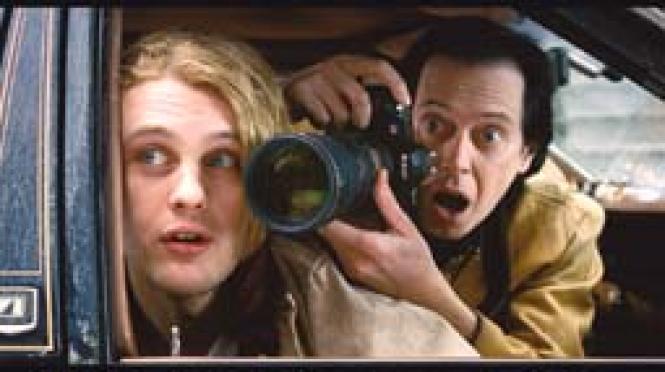 In Delirious, Tom DiCillo's satire about an abrasive paparazzo who bonds with a charismatic homeless kid, Les (Steve Buscemi) invites Toby (Michael Pitt) up to his Lower Manhattan railroad flat. Now, if the two were simply to trade shelter for sex like rational guys do every day, there would be no movie, or at least no movie that could be marketed outside the ghetto.

No, heaven forbid, anything but that. So what options are open to them? Les, a tabloid photographer whose claim to fame is having shot Elvis Costello without his trademark hat, imagines that this obviously resourceful kid can be an unpaid assistant who will sleep in Les' utility closet, and spend his days answering the phone, fetching coffee and perhaps preventing Les from fulfilling God's plan that he become Lee Harvey Oswald.

"Look, I don't give a shit. It's just that I've got a lot of chicks coming over. I don't want to give them the wrong idea."

"Whatever! I go with the flow. That's my motto. Otherwise you snap like a toothpick."

DiCillio, whose 1997 Living in Oblivion put a hilarious spin on the mad dreams of a band of independent filmmakers, sees paparazzi as terminally disgruntled roving assassins, whose embarrassingly candid shots of the stars are little murders. At one point, Les and Toby ambush an aging action actor after the guy has surgery to correct the rightward tilt of his penis. This "shot seen round the world" as Les calls his most outrageous photo pranks, nets Les 700 bucks and provides an opportunity for Les to bring Toby home to meet his clean-freak parents, who, of course, immediately assume that they're a gay couple.

Delirious sizzles as long as it loiters in the R. Crumb universe of geeky losers who keep their homicidal urges at least barely in check. But Toby has bigger fish to fry. A quick study — the opening-credit scene has him springing out of a dumpster like a mermaid from the sea — Toby catches the eye and the heart of a Britney-like starlette (Alison Lohman) and a Paula Abdul-style soap opera casting agent (Gina Gershon), and pretty soon he's the new American heartthrob. Mixing a damaged pet-shop childhood with an aching sincerity that could make the Dali Lama seem like a shameless manipulator, Toby sweet talks everyone in his path to the red carpet, and throws Les' sour hipster's philosophy in his face: "You said it yourself, Les: Elvis Costello — they're just human beings like us." Now, this guileless stab at stardom could be seen as an uncanny prediction of Hairspray/High School Musical cutie Zac Efron's recent rocket to fame, or it could be a tongue-in-cheek homage to Michael Carmen Pitt.

Using a below-the-radar season on Dawson's Creek as a launching pad, the New Jersey lad Michael Pitt, dying to act since he was 10, was soon hitting his marks for a cavalcade of hip directors: as the neophyte rocker who breaks a tranny's heart in John Cameron Mitchell's Hedwig and Angry Inch, as the dopey kid with a murderous streak in Larry Clark's Bully, as the cleancut American student who tumbles into bed with a kinky brother/sister act in Bernardo Bertolucci's The Dreamers, as one-half of a Leopold and Loeb-style homicide-for-kicks duo in Barbet Schroeder's Murder by Numbers, and as an uncanny, dead-on Kurt Cobain-like portrait of a suicidal rock star in Gus Van Sant's Last Days.

Each time Pitt stood out without seemingly trying by invoking some unexpected bold stroke or talent — the frank and non-exploitative nudity of The Dreamers, the musicianship in Hedwig and Last Days — and each time you forgot how much you had loved him the previous time. Now, as Toby, Pitt kisses his anonymous apprenticeship goodbye, literally disappearing into the blinding white light of cameras more powerful than Les can ever command. This is a smart and funny movie that shouldn't be taken to the woodshed just because it can't entirely reconcile an American Splendor setup with an American Idol climax.

Everyone used by Toby in the film comes to terms with his game except Les, who discovers a tad late just how much he needs the puppy-dog boy at his side, on his side of a glass that will always come between him and the pretty people he humiliates. Because this is not Day of the Locust or Sweet Smell of Success, payback for Les can't be apocalyptic. In the end, it's as if Lee Harvey Oswald could have been persuaded to trade in his vision for a spot on Gilligan's Island.