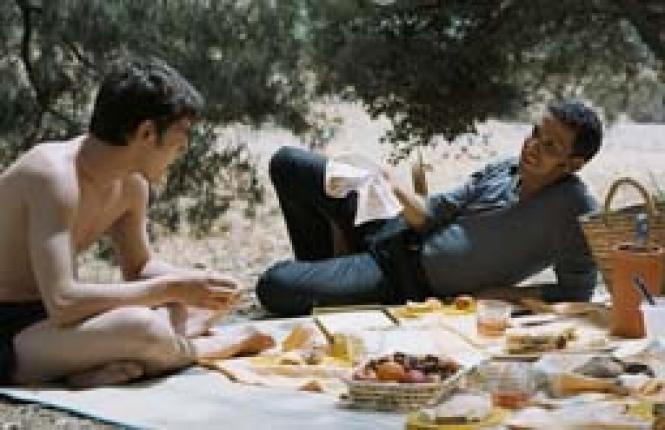 Scene from The Witnesses.

The Witnesses This daring memory piece set in the perilous early 1980s is from Andre Techine, creator of the great coming-of-age film Wild Reeds. In its first act, a teen from the sticks discovers his Paris while cruising the bushes and sharing a small room in a cheap motel with his opera-singer sister. Manu (the frisky Johan Libereau) is so hot-to-trot that he launches into an explosive affair with a cop who isn't gay, who is harassing the hotel's female prostitutes. Techine has a knack for distracting you with things that don't matter, before delivering a sucker punch of things that do.

Writer/director Daniel Karslake (with Nancy Kennedy) debunks myths and blatant misinterpretations of the Bible's message on homosexuality. His documentary takes a witty and compassionate view of what coming out in a religious family feels like, both to adult gay kids and their bewildered parents. We see a lesbian daughter invited to join her dad's campaign for President, while a Minnesota son convinces his once-fearful parents to get arrested demonstrating against the false consciousness of a TV preacher. Karslake summons a smart panel of religious thinkers (including South African Bishop Desmond Tutu) to debunk some of the downright bizarre folk-wisdom that infects people who think they know their Bibles. "There are a lot of hate crimes across the country against gay and lesbian people, and many, many times the perpetrators of those crimes point to the Bible." (Oct. 12)

Fat Girls A seductive deadpan comedy in the style of Napoleon Dynamite by wunderkind Ash Christian, Fat Girls will leave you smiling. Rodney Miller (Christian), a self-described "fat girl," is actually a plumpish gay boy with dreams of Broadway. Rodney, who gives hand-jobs to the school's top jock, decides to ask another rebel, the very humpy British visitor Joey (Joe Flaten), to his small-town Texas prom. The film company got flack from the city fathers of Canton, Texas when they learned of the subject matter, so the production switched to the Dallas suburb of Waxahachie.

There are no big jokes, just a series of the risibly shameful moments that are delightfully preposterous when viewed from the right angle: Rodney's fundamentalist mom cooks foods in religious themes; his dad died after sex with a pushy midget woman; Rodney is pining for a glimpse of prom-date Joey's wiener; and his teacher Mr. Cox (Tarnation 's Jonathan Caouette) does a mean drag act at the local queer bar. (Here!TV)

Trade Openly queer director Marco Kreuzpainter, who last pleased with Summer Storm, his tale of humpy young rowers cavorting around a German lake paradise, makes his American debut with an emotionally charged "message film" about the sexual traffic in children across the perilous if porous US/Mexican border. Kevin Kline is uncharacteristically ferocious as a Texas cop searching for his daughter, who joins forces with the young Mexican brother (the passionate Cesar Ramos) of one of the kidnapped girls. The filmmakers stir the pot on one of the hottest of hot-button topics. (Sept.)

An American Crime Openly gay director Tommy O'Haver (with co-writer Irene Turner) tries his hand at a genre of filmmaking that seems worlds removed from his debut efforts, the quasi-autobiographical Billy's Hollywood Screen Kiss and the Shakespeare-inspired teen comedy Get Over It. O'Haver tackles a horrendous real-life atrocity committed by the troubled female head of a large Indiana brood. The versatile Catherine Keener plays Gertrude Baniszewski, a woman who finds a dastardly way out of the double curse of poverty and her own shaky mental balance.

There Will Be Blood "I hate most people. I want to make enough money so I can get away from everyone." Those excited by the Castro's recent "Anderson" retrospective (Wes and Paul Thomas) should eagerly await PT's provocative treatment of the Upton Sinclair novel Oil! Set among the smoke-belching drilling rigs that dotted the early-20th-century California landscape, the story pits a misanthropic prospector (Daniel Day-Lewis may trump his Bill the Butcher from Gangs of New York) against a young fundamentalist preacher (the astonishing Paul Dano, set for a breakout after his emotionally honest ensemble work in Little Miss Sunshine). (Late Dec.)

The Heartbreak Kid One awaits with a mixture of anticipation and dread this remake of one of the darkest anti-romantic comedies of the early 70s. In 1972, Elaine May directed Neil Simon's script about the implosion of a Jewish couple's Miami honeymoon, getting a career performance from Charles Grodin as a risibly fickle young groom who dumps his stunned bride to woo a Minnesota ice princess. Eddie Albert is chillingly on target as the blonde princess' un-amused papa. Working long before Seinfeld popularized edgy Jewish humor that defied old taboos, the filmmakers dared you to laugh as you squirmed. The 2007 version reunites the Farrelly Brothers team that brought us There's Something About Mary, with Ben Stiller as the groom. This one is a real test of whether Hollywood can make comedies for and about adults that don't strive for characters who are lovable in all the wrong ways. If this one turns out to suck, please rent the original. (Oct. 5)

Into the Wild Director Sean Penn pushes his fearless leading man, Emile Hirsch, to give it up in a portrayal of a young Atlanta man's frenzied dash for total freedom. Based on Jon Krakauer's bestseller, Penn's film tests our patience with a time-tripping style of cinema that mixes fiction and nonfiction narratives, unabashed physical and emotional nudity, facial hair and hard-to-watch hunting scenes, in an effort to remind us how much of this country remains untamed, and to repair the battered image of the American hippie.

Finishing the Game The gutsy Justin Lin provided an unflinching look at pampered Asian-American teens running amok (Better Luck Tomorrow), then stumbled badly with a numbingly blank melodrama about a Naval Academy boxing team, which benefited only from a pumped-up James Franco (Annapolis ). Here Lin returns with an uneven but at times very funny fictional imagining of the chaos that overtook a small studio upon the sudden death of martial arts star Bruce Lee. Lin employs a huge and wildly eclectic cast to poke fun at the film world's treatment of Asian actors. But mostly, he abandons the soapbox and gives us a carnival funhouse spoof of Hollywood in the 70s. With McCaleb Burnett, Roger Fan, James Franco, and Jake Sandvig as the gay son of a studio mogul. (Oct. 19)

Control Video director Anton Corbijn looks inside the troubled world of Ian Curtis (Sam Riley), the mood-swinging frontman of the influential British post-punk band Joy Division ("Love Will Tear Us Apart"). The film is based on a memoir by Curtis' wife (Samantha Morton). (Oct. 26)

Joe Strummer: The Future Is Unwritten Famed punk chronicler Julien Temple (The Filth and the Fury) looks at the life and times of a musician who left tracks across some pretty notable lives. With appearances by Bono, John Cusack, Johnny Depp, Matt Dillon and Jim Jarmusch. (Nov. 9)