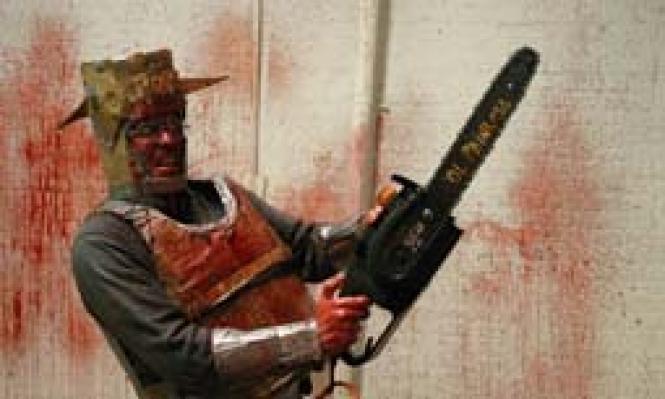 Not every film I've viewed in the 4th Another Hole in the Head horror film festival (at The Roxie, June 1 Ã¢â‚¬â€œ 14) could be labeled "blood-curdling," but some kind of simulated red stuff is involved in most of the movies carved out of the poverty budget division of gore and presented for the true fan. My choices, while not comprehensive, comprise the best of what I could stand to watch. www.sfindie.com

Hazard. This goofball Japanese slacker film from Suicide Club director Sion Sono is "horror" by default and that's probably why I liked it. Three misfits Ã¢â‚¬â€œ fleeing the collapse of their country's early 90's economic bubble and what they feel is a sleep inducing conformity Ã¢â‚¬â€œ go crazy in pre-Rudy Gotham.

Shot in 2002 and shelf bound until now, Hazard suffers from the illogical plot digressions that dog many terminally hip auteurs, but Sono is crafty enough in his casting and flashback structure Ã¢â‚¬â€œ narrated incongruously by a grade school girl Ã¢â‚¬â€œ to provide a gonzo nutty trip for Midnight maniacs.

The best of the cast is Joe Odagiri as the feckless Shin, pictured in back story as a child yearning to fly. Arriving in 1991 New York City, Shin takes a weird fancy to a sidewalk vendor T-shirt with the word "Hazard" emblazed like a rock band logo. Shin quickly falls victim to every crime-driven bummer the Big Apple spawned pre-Guiliani, finally winding up in the clutches of two equally crazed Japanese immigrants, one of whom uses a lower Manhattan ice cream factory to front a hip drug business.

The film could have benefited from either the sudden arrival of Harvey Keitel's Bad Lieutenant or an injection of edgy sexual content of almost any orientation. One odd byproduct of America's defeat of Imperial Japan was a partial loss of the Japanese people's belief in their culture's founding myths. Films like Hazard, for all their flaws, show a people sleepwalking through the myths of another impossibly alien society. It is this social nihilism/amnesia that registers and bites. (Roxie, June 4 & 8)

Murder Party. The art school crowd will definitely recognize the poseur personalities on display in this black comedy that tips its hat to Scorsese's After Hours. A bachelor whose life has degenerated into a series of well-worn ruts receives a Halloween invitation to an evening of gore that swings wildly between life changing and life ending. Director Jeremy Saulnier keeps this diabolically clever conceit on-track through a nightmarish slice of Brooklyn as daunting and at times as daffy as that which confronted Cary Grant in Arsenic and Old Lace. The script not only ups the ante on horror film conventions but also pokes fun at youthful paranoia and insecurities. With the short: Night of the Hell Hamsters (Roxie/6-1 & 11)

Special. "Most people never think about the problems associated with being a superhero. Instead, they tend to focus on the glamour, the powers we have, things we can do that no one else can. But the unfortunate truth is that while being different can be exciting at first, ultimately it can get a little lonely."

This feature debut from the writer/directors Hal Haberman and Jeremy Passmore plays with some tender and sad metaphors about modern humans on a crowded planet. Our hero Les (the compelling Michael Rapaport) is a male meter maid Ã¢â‚¬â€œ an occupation that turns up more than once in this festival Ã¢â‚¬â€œ who is put on a cutting edge anti-depressant. As the doc overseeing the test explains to Les the new drug "inhibits chemicals in the brain that control self-doubt." This can of worms has a decidedly disturbing effect on our Les who turns from a tender- hearted nebbish who can't bare to write a parking ticket to a guy who hears voices and believes that he has acquired crime fighting superpowers. The filmmakers mix nifty low budget trickery and an absolutely truthful performance by Rapaport to let us see how Les experiences his "new powers" alongside what every other character senses: that he's nuts and possibly dangerous. Special invokes the oddly muted magic of early sound era horror classics like The Invisible Man, as Les combines the vulnerability and manic sense of invincibility that Claude Rains evoked so poignantly when the bandages came off. Wildly funny at times, the film aims to break your heart and despite pushing its own special powers to their limits I think it succeeds. With short: With Grace (Roxie 6-6 & 8)

Simon Says. William Dear's cute college kids lost in the woods blood fest adds a few kinks to this most conservative of genres: these kids are dispatched for very specific sins: pot smoking, full frontal male nudity, bottle water snobbery and all round horrendous table manners. Each victim fits a specific notch on the food chain from anal Asian princess to blonde guitar strumming pothead. The film splatters fake blood over some our state's finest green acres from Grass Valley to Santa Barbara. While one or two performances standout: kudos to Greg Cipes (Stress Orgasms and Salvation) for channeling some sweet charm into that hoary clichÃƒÂ©: the hairy-chested pot-addled hippy. The real acting honors are reserved for Crispin Glover for a deliciously awful dual turn as homicidal twin brothers. Glover is so bad as to be indescribable, at times you feel that the actor has truly lost his mind, with his rape of basic elocution and fright wig theatrics, he makes Norman Bates seem like the Archbishop of Canterbury.

The teen slasher flick may be the very last vestige of a pleasure-denying Puritanism that many of us have taken a virtual blood oath to vanquish. (Roxie/6-1 & 11)