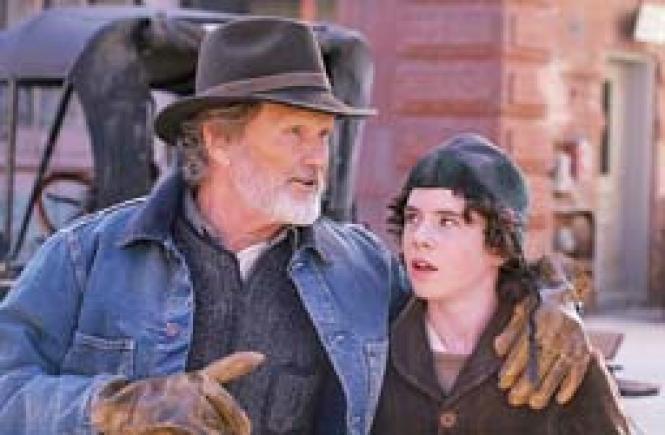 Disappearances delightfully fudges the line between an old-fashioned boy's adventure tale and a distinctly adult postmodern Western. A 15-year-old farm boy is reading Milton in a one-room schoolhouse where the teacher is his own mysterious Aunt Cordelia (Genevieve Bujold).

"Tell me the point of the poem."

"Everything has a point. You just need to know how to look for it! Paradise Lost is about disinheritance, about how the Eden we once had has disappeared."

The boy looks out the window and notices that his family's barn is on fire. "Aunt Cordelia, I think our farm is disappearing."

Wild Bill Bonhomme (Charlie McDermott) has a face as fresh as the maple syrup his dad, Quebec Bill (Kris Kristofferson), is trying to coax out of his trees before the spring thaw. By the time we leave him, Wild Bill will know the gut-disturbing taste of Canadian whiskey, how to maneuver a liquor- loaded Cadillac through a hail of bullets, and what it's like to kill a man.

Wild Bill is a boy growing up in a paradise almost lost: Vermont's Northeast Kingdom and Southern Quebec's trackless forest, a hypnotically lovely Eden perilously out of synch with the times. It's 1932, months before the end of American Prohibition, and the only thing Quebec Bill is good at, whiskey-smuggling, is on the verge of being permanently out of fashion.

In a boyhood where the s word is survival, not sex, where a few half-crazed priests are driven by a thirst for booze not boys, Wild Bill is living on barren soil. People grow what they eat, tolerate outhouses, weekly baths, gas lamps; society means church or the weekly hoedown where the only music you'll hear is played by folks you'll later share a drink with.

Out of options, Quebec Bill rolls the dice for a last crazy run at a whiskey treasure held by the murderous pirate Carcajou (Lothaire Bluteau, the sexy martyr from Jesus of Montreal). His merry men include an Indian brother-in-law (Gary Farmer), a grouchy hired-hand (Deadwood's William Sanderson) and Wild Bill. Unlike most outdoor adventure tales aimed at kids, Disappearances dispenses with good and bad guys and goes for the Sam Peckinpah-patented "over-the-hill gang," guys who will probably die trying.

Adapted by director Jay Craven as the final chapter of a Vermont trilogy based on Howard Frank Mosher's novels, Disappearances traffics in what would pass for magic realism south of the border, but which here comes off as a Paul Bunyan tall tale, where characters make a habit of morphing without warning into ghosts. It's a way of keeping the whole movie in a flashback, without resorting to the hackneyed device of an adult narrator. The result, with its offbeat humor, is like a blend of Faulkner light with the tragic foreshadowing of Robert Altman's McCabe and Mrs. Miller.

McDermott's Wild Bill goes from cream-complexioned kid to scarred young man without passing through his terrible teens. Consistently beats ahead of his footloose dad, Wild Bill acquires adult survival skills without losing a boy's sense of wonder. His jaw drops from the sheer pleasure of stealing a train from its hapless engineer, while never losing sight of the wreck that lies just around a perilous curve.

Bluteau's Carcajou is a demon pirate who seems ripped right out of a Disney theme ride or the next Pirates of the Caribbean sequel. You just can't kill the guy! Bujold, light-years from her leading damsel-in-peril days (Coma ), anchors the story's William Blake-like metaphors as a world-weary ancestor spirit who slips, by story's end, into a quiet grave before the startled eyes of a nephew who has, by this time, seen everything.

Kristofferson is quietly astonishing in his best work since his malevolent sheriff in Lone Star. His Quebec Bill, the very essence of the wise mentor, is a ferociously comic manifestation of what Blake must have had in mind when he observed, "If the fool persists in his folly, he would become wise."