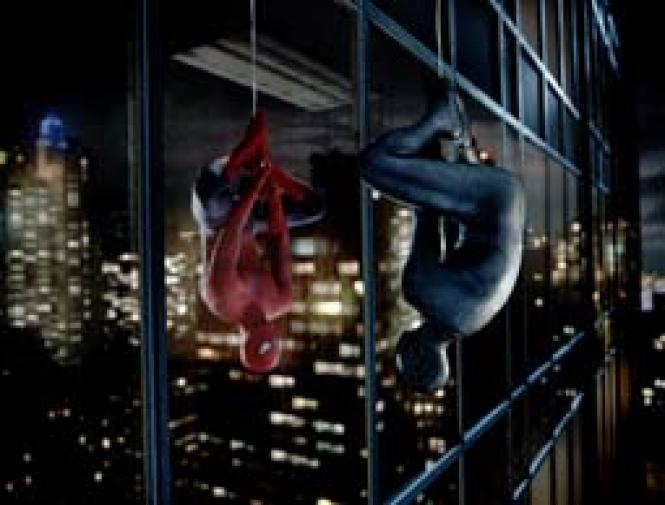 In the latest chapter of the greatest action series ever filmed, Spider-Man (Tobey Maguire) drops his mask, utters sweet nothings to Mary Jane, lets fame go to his head, flirts with another woman, has mano a mano combat with his best male friend that feels suspiciously more passionate than the sex he isn't having with his lady, takes on three new villains, faces down his inner demons, and finally saves the day in a somber series-ending climax that bears an uncanny resemblance to the elegiac third act of Saving Private Ryan. If this sounds a bit ambitious for a franchise supposedly pegged to the sex-adverse, violence-besotted tastes of nerdy 14-year-old boys, maybe that explains the bad reviews Spidey's been getting from the upscale press. But don't listen to critics who've seen too many movies. Spider-Man 3, especially the Imax version, is a must-see for anyone for whom movies are the only religion.

I'll start with the good stuff. Spider-Man 3 opens with Spidey essentially basking in his poll numbers. Crime is down in Gotham, and guess who's taking the credit. "They love me!" To which a pint-sized urchin chorus of one cries, "No, Spider-Man, no." But then, who listens to kids?

But just as Spidey as Peter Parker is romancing Mary Jane (Kirsten Dunst) in a cute little spider-web-swing suspended over Central Park, trouble arrives in the form of a noxious, black, sticky substance from outer space Ã¢â‚¬â€ an effect not unlike the killer-plant seeds in Little Shop of Horrors. The sticky, icky stuff attaches itself to the license plate of Peter's motorscooter, and immediately starts to wreak havoc at Peter's job as freelance photographer for The Daily Bugle.

Peter has a bratty new rival for the job of putting Spider-Man's crime-fighting exploits on the Bugle's front page. Eddie Brock (Topher Grace) flirts with Peter's tight-fisted, unscrupulous boss J. Jonah Jameson (the irascible J.K. Simmons) to snatch the staff-cameraguy job out from under Peter. Peter's revenge gives the movie a wacky, Jayson Blair subplot, and ultimately gives Spidey a fierce new doppelganger nemesis as slick Eddie morphs into Venom, in effect a dark twin to Spider-Man, possessing his powers but none of his scruples.

The movie's ace card is the incomparable Sandman, a creature who results when petty criminal Flint Marko (Thomas Hayden Church) accidentally stumbles into a molecular depolarization machine and finds himself able to shape-shift between his old human form and a sand cloud with vast destructive powers.

There's no question that Spider-Man 3 is the most CGI-sophisticated installment in the series. All the previous complaints about cartoon figures usurping the main action set-pieces are blown away with sequences where the leads do an amazing amount of their own stunts. My only quibble is the new hyper-fast editing of the fight scenes, which may make many of them hard to follow on first viewing.

Spider-Man 3 is on one level a surreal nightmare encompassing virtually every physical threat that can overtake a big city. Who can see the cyclone-like Sandman without recalling the deadly cloud that hurtled down Manhattan streets after the Towers collapsed? An early scene shows the panic that ensues when a runaway crane slices through the upper floors of a midtown office-building, scattering desks, files and temp-workers like confetti on New Year's Eve.

Two characters close to Spidey/Peter Parker switch roles in a disconcerting way that makes perfect sense in a movie franchise meant to be as sex-free as a Bollywood musical. Kirsten Dunst's Mary Jane, who reached her series apogee in the delicious Oscar Wilde play scene in Spider-Man 2, here suffers the classic fate of most girlfriends in movies dry-cleaned of hetero erotic beats. The real passion flows between Peter and his lifetime chum Harry Osborn (James Franco) as Peter and Harry square off. Franco provides a kind of Dorian Gray subtext to his portrait of a good boy struggling but failing to throw off the evil shadow of his dead father. The sincerely earnest Maguire and the almost disquietingly pretty Franco can't help but give off the sexual subtext so familiar from Western gunfights. The Titanic struggle between them is the latest chapter in the relentless if unconscious homosexualization of American action-heroes. The trend began when, largely to avoid unmarketable R or X ratings, women were essentially excised from being either objects of lust or partners-in-crime.

Spider-Man 3 is almost an embarrassment of riches, with villains and subplots almost sufficient to fuel a fourth installment. A more prudent approach might have been to cut out one of the villains. Because he lacks the pathology, evil for its own sake, of Spidey's other great foes, Sandman is the logical candidate for the chopping block, but then we'd lose some of the most indescribably awesome CGI-action murals ever created.