Flights from the Little Sparrow 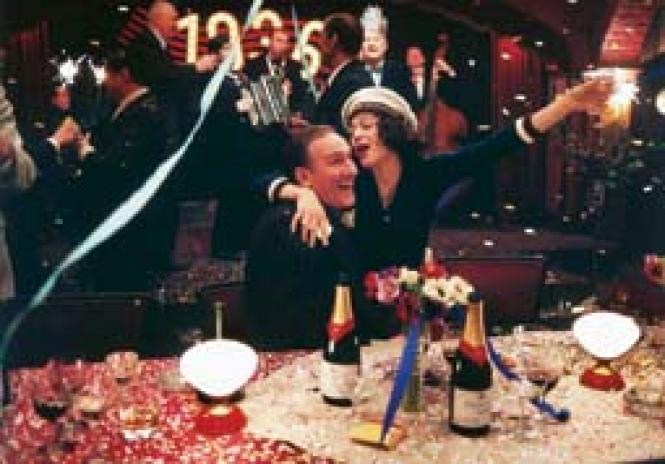 Several compelling films in the final four days of the festival offer surprising and troubling takes on revenge, redemption and firearms.

La Vie en Rose Olivier Dahan avoids the paint-by-numbers biography where questionable quotes and set-piece "great moments" arrive as predictably as baseball's seventh-inning stretch. The short life of the height-challenged (4 ft.-8 in.) Edith Piaf is a daunting project for any filmmaker wishing to sort truth from myth, some of it propagated by the legendary French diva. Marion Cotillard convinces as both the guttersnipe young Piaf (before she was Piaf) and the slowly dying but still commanding performer who electrified audiences on both sides of the Atlantic. Dahan delivers some emotionally satisfying sequences. The young waif who, surviving abandonment by both parents, was raised in a brothel by her paternal grandmother, was discovered by a music-hall impresario, and was intimate with Dietrich but most in love with boxer Marcel Cerdan, is well represented. A glaring omission involves Piaf's almost mystical service to the French Resistance. Long for all but the true fan, containing the obligatory musical stations-of-the-cross, this film isn't Ray, but it isn't bad. (Castro, closing night; 5/10)

A Parting Shot In Jeanne Waltz's pitiless character study, Frederique is a young nurse who can't take another morphine drip for another dying patient, the sight of her gun-obsessed dour dad, her feckless boyfriend or anything else in her claustrophobic little Swiss village, with its cloying beautiful views and icky social scene. Some misfired casual sex proves the final straw as Fred packs her rifle and heads for a lonesome pine. Distracted by two boys tossing stones, Fred impulsively sends the bullet she meant for her brain into the kneecap of 14-year-old Marco. The film's trump card is the strange bond that forms between a suicidal nurse and this angry boy, whose divorced parents butt heads at his bedside. Gifted with the ability to transmit a character's thoughts in a cascade of complex emotions, the astonishing newcomer Isild Le Besco (the starstruck fan of Backstage) allows us to grasp how a clinically depressed character starts to heal herself by finally placing another person's fears and fate above her own. Bed-bound Steven De Almeida is riveting as a less than cuddly teen. (Clay, 5/5; Kabuki, 5/7, 8, 10)

Rage Zuli Aladag delivers a German nuclear family meltdown as a fearful/bored blonde teen, Felix (Robert Holler), trades his college professor dad's blueprint (mastering the cello and expensive running shoes) for a whiff of dope and the cheap thrills of a rowdy Turkish boy gang headed by the mercurial Can, a loose cannon who morphs from bullying thug to buddy, to Rasputin-like prophet of an impending race war. Oktay Ozdemir is a revelation. In a film that begs comparison to Scorsese's remake of Cape Fear, the shape-shifting Ozdemir delivers a seductive villain with a subtler palette than Robert De Niro's captivating sociopath. At first, Felix is the nerdy victim of a more hormonally-fueled brand of teens, but as Can casts his spell, Holler turns into a prickly boy who will test his liberal dad's beliefs: "Why did we let those people into our country?" Yet in the next scene, he auditions to be Can's bitch boy. Can plays the "queer" card, baiting Felix to reject his "weakling" dad's hypocritical politics, while begging dad (August Zirner, in turn sympathetic and repulsive as the humiliated "good German") to use one of the guns introduced in the second act. (Kabuki, 5/1)

Flanders I'll admit I first detested Bruno Dumont's didactic juxtaposition of a young French soldier's agonizing duty in an unnamed desert country with his ambiguous ties to a farmgirl who may or may not be waiting his return. Dumont disdains subtlety: you will be whipsawed between a grisly guerilla war sans heroes or any audience-involving characters, and the almost obscenely dull routines of the French countryside. Particularly harrowing are the executions of two barely pubescent soldiers Ã¢â‚¬â€ one boy's agonizing death rattle will stay with you. This one is definitely not for everybody. (PFA, 5/6; Kabuki, 5/8, 9)

Tierney Gearon: The Mother Project Jack Youngelson and Peter Sutherland provide a remarkably intimate look inside an American family whose matriarch has made a profitable vocation out of doing provocative and at times unbelievably candid pictures of her mood-swinging mom and her prepubescent children. Growing up with severe mother issues as her mom slipped into clinically defined mental problems, Tierney Gearon developed a knack for posing her clan for a series of gallery-popular photomurals that included shocking images of her young daughter and son stark naked, wearing only the kind of masks seen in Peter Greenaway movies. Avoiding prosecution for child pornography in London after the British art world and tabloid press rallied to her defense, Tierney returns to her Upstate New York roots to capture her frequently grouchy mom in her disheveled snowbound cottage. The movie offers questions not so much about the sexual exploitation of one's own children, but about the dilemma of living in an age of the omnipresent digital shutter. As Gearon's blonde son, approaching puberty, is quizzed by the filmmakers about having semi-nude photos of his younger self decorating the family's new LA digs, we are left to wonder how her kids will one day view this museum of their childhood. (Kabuki, 5/4, 9; SFMOMA, 5/6)

Love for Sale Brazilian Karim Ainouz's (Madame Sata) second film offers another shit-disturbing protagonist. Hermila (Hermila Guedes), abandoned by the father of her infant son in a town resembling the Panhandle Texas of The Last Picture Show, concocts a unique exit strategy: sell raffle tickets, the grand prize being herself and "a night in paradise" for the lucky man, underwritten by 200 less lucky saps. Soon Hermila is the little dustbowl's most desired and despised female. Ainouz employs a queer sensibility in tandem with his emotionally volatile lead to have a subversive but upbeat feminist spirit undermine the macho creed of women as property. The story's underlining sadness is cushioned by lovely comic touches, as when best friend Georgina (Georgina Castro) convinces Hermila to share a favorite giddy pastime: sniffing nail-polish remover. (Kabuki, 5/4, 7; PFA, 5/10)

Punk's Not Dead Where the lively American Hardcore focused on punk's forgotten regional byways, giving overdue recognition to queer punk, Susan Dynner's film grapples with the myths about punk's much-debated move to the mainstream. Anchored by mega-stars Ã¢â‚¬â€ Green Day's Billy Joe Armstrong, Black Flag frontman Henry Rollins and Dead Kennedys founder (and one-time SF mayoral candidate) Jello Biafra Ã¢â‚¬â€ Dynner devotes half the film to British punk and the emerging geriatric division, punkers playing beyond the optimum age for maintaining a Mohawk. The third act spotlights the kids: groups such as Good Charlotte, who followed Green Day and committed the unforgivable sin for the hardcore fans of getting radio play (a benchmark was when the single "Fuck Authority" got on the air) and selling records. The deftly-paced doc goes from sweaty, shirtless boys in 70s video replays to today's kid musicians blowing off steam playing dodgeball. It illustrates my pet theory that a hidden agenda of the pop/punk culture has been to provide a socially acceptable form of group marriage for young males under 30. (Kabuki, 5/4, 8)